Donald Trump’s administration has become expert at diverting negative attention from itself, requiring journalists to be extra vigilant when covering the 45th president.

News professionals offered suggestions about “Separating Fact From Fiction: The Role of the Media in Trump’s America” during a panel discussion hosted by the activist Chappaqua group Left of Main Street (LOMS) Friday night.

Moderated by Inside Press Inc. Publisher and Editor Grace Bennett, the lively and often chilling discussion among panelists—attorney Kristen Prata Browde, a veteran news reporter and anchor; Helen Jonsen, whose broadcast and digital credits include Forbes, WPIX, Fox5, NBC, Working Mother, FIOS1 and international outlets; Westchester County Business Journal editor Peter Katz and Kate Stone Lombardi, who has been a reporter for The New York Times, The Wall Street Journal, TIME, Readers Digest and other national publications—reinforced that media must double-down on its efforts to cover the 45th president.

Since the election, media has been accused of “not doing its job” and of helping Donald Trump get elected, Bennett said in opening the discussion. Trump’s attempts to silence the press by calling it dishonest, dismissing reports as “fake news” and silencing reporters compound the Fourth Estate’s responsibilities. The panelists jumped right in.

“You have to keep in mind that Trump is an actor,” Katz said. “At the moment he happens to be acting the role of president, and he has surrounded himself with others who are very skilled at manipulation.”

“We shouldn’t be loved by people we ask questions of,” Browde said. “That’s what a healthy press does. We’re channeling the questions of the public and holding them (politicians) accountable.”

News delivery changed: social media is available via cell phones, Twitter, and it influences how much the public sees, she said. A comment that once stayed on the cutting room floor is what Trump uses to his benefit.

“Most reporters aren’t intimidated by Trump when he comes after them,” Lombardi said. “I think they double down when he does. To me the danger is not that reporters get nervous; it’s that he keeps suggesting they are telling lies.”

If reporters don’t feel the companies they work for are backing them, then they’ll back off when facing difficult situations rather than risk losing their jobs, Browde said.

“Keep in mind that the media is big business,” Katz reminded. “Networks own stations, and stations remain on the air by virtue of the renewal of their FCC (Federal Communications Commission) licenses.”

Democratization of media means someone with a Twitter handle can be “the press,” Browde added. It also created niche media. “We’re narrow-casting options to narrower audiences. Those who watch a conservative news station and read a conservative newspaper get “something very different than you do.”

Not only that, Jonsen added, people are surrounding themselves with others who agree with them and blocking social media news feeds of people who disagree with them.

This begs the question, What are reputable media sources? Katz suggested watching news stations whose views oppose their own will make the public better news consumers. In most newsrooms he worked in, reporters and editors left their personal viewpoints at the door, “and being impartial was sacrosanct.”

“We (reporters) were trained not to have political beliefs and to get a balanced story,” Lombardi recalled. While reporters have their own beliefs and opinions, she said, “That’s human bias and is very different from editorial slant. It’s important to distinguish between a newspaper’s slant and the quality of its journalism.

The difficulty with filling 24 hours a day with news is that there’s no news filter, no editor, no time to fact-check, which allows Trump to speak all things, said Katz.

Browde agreed the media pandered to Trump the celebrity and didn’t take him seriously.

“There’s no one around to counter alternative facts” of campaign coverage,’ she said. Because of finances, “we’ve lost a serious amount of the substance. The direct connection between the president’s thumbs and us is now a nanosecond. There is no filter, there is no gatekeeper, (and) it’s created a reactionary press.”

It also changes the public’s relationship to the president, who can Tweet something in 140 characters without anyone fact-checking. Katz agreed, adding this is the first White House to use social media as a main form of communication.

If Trump’s disrespect for journalists is bad, then his disregard for the judiciary is worse. “Unfortunately, I think he’s parroting Adolf Hitler,” Katz said. “There’s a real hazard.”

“That is the point,” Jonsen said. “The first (act) for a dictator, a Nazi regime, is to shut down a free press. So the press needs to be that much more aggressive and call this administration out at every turn.”

“I think the media is savvy in not following the latest Tweet and is keeping their eyes on the story,” Lombardi said. “You have to be careful as a news consumer about what you’re looking at. The way mainstream media defends itself is by continuing to put out a really good product.” 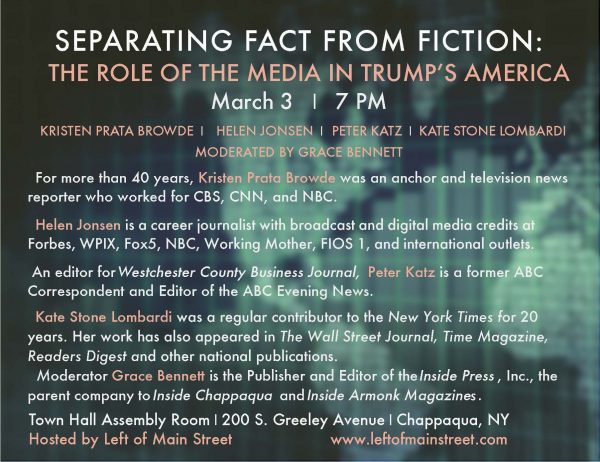 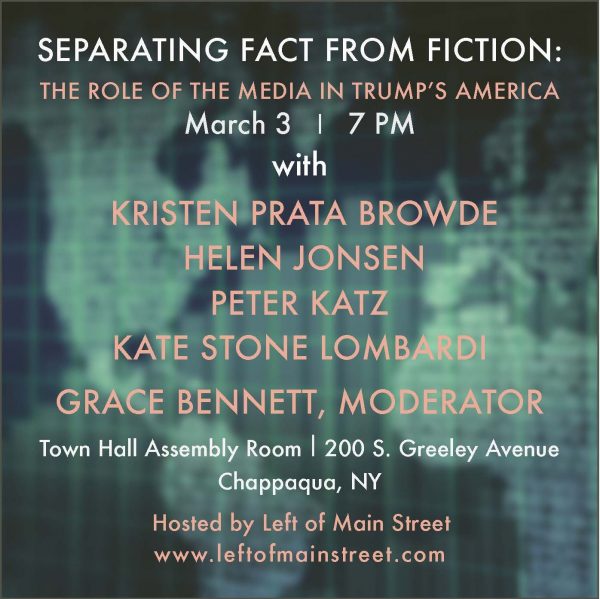