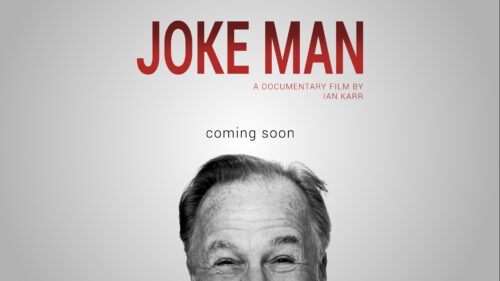 I had the good fortune to watch an advance screening of Joke Man, Ian Karr’s heartfelt documentary about comic genius Jackie Martling.

Directed by Ian Karr (a long time Chappaqua resident), produced by Jonathan Jacobson and edited by Ronni Thomas, the filmmakers describe the film to a T: “Jackie Martling just may be America’s last great joke teller…

“His savant-like ability to remember every joke he’s heard since he was eight years old, combined with his lightning fast wit and infectious laugh, helped establish him as a comedy icon. Famous for being the head writer of the Howard Stern show for 15 years, and infamous for leaving that position, Jackie’s story is fascinating, funny and surprising, In an age of political correctness, Jackie “The Joke Man” Martling helps us belly laugh at ourselves with a kindness and sincerity that defuses his unfiltered punch lines.”

Aside from Karr and Jackie Martling, of course, the cast boasts ‘big names’ in their own right–all passionate Jackie “The Joke Man” Martling fans extolling Jackie including Artie Lange, Willie Nelson, Mark Cuban, Billy West, Sean Young, Gilbert Gottfried, Penn Jillette, Stuttering John Melendez, Steve Grillo and many other familiar faces. Those closest to Jackie, including his ex-wife Nancy and his present-day girlfriend Barbara (the two, as noted in the movie, are friends) weigh in too about Jackie’s person and career with considerable affection. If it’s a Jackie love fest, the movie also makes clear that he has earned it.

There’s priceless footage of Jackie chumming it up with Rodney Dangerfield, and of the two horsing around in Vegas.

The film delves as much into ‘what happened’ as it does the impact that leaving as head writer of Stern’s show for 15 years had on Jackie’s life. Jackie stands plenty proud in recollecting not only the break from Stern but his contributions to Stern and the show. Footage of Jackie diving into the ocean (at the craziest hours!) for his regular swims presumably speak to at least one secret behind his resilience and continued energy and focus. 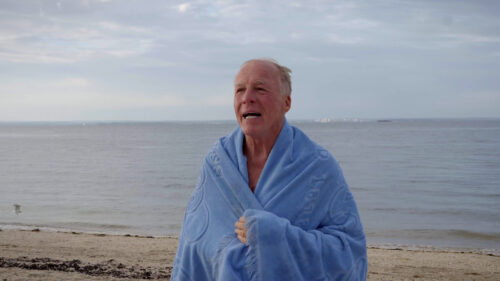 Just Between Us: I had met Jackie on several occasions, the first time as a guest to one of his stand-up gigs in the city. 70 something now according to the net (that’s all I could get out of Karr!), Jackie still widely tours and has an intensely devoted following. Some say ‘cult like,’ but you’d be surprised by his more mainstream fans, too.  So hey, there’s a side to me that you never knew, as Adele sings, and yes, I like raunchy humor, remembered Jackie’s antics from the Howard Stern show, and even teased him after his gig, too.  A lighthearted flirtation ensued, so lo and behold I was invited to appear as a guest on Jackie’s Joke Hunt at Sirius. Then finally, during a photo shoot at the Kittle House for a Father’s Day cover of Inside Chappaqua Magazine.  I included Jackie on a cover photograph with Ian and four other mega accomplished Chappaqua dads. How Jackie, who lives on Long Island, landed on that cover too, I can’t fully explain. But he did!

I caught up with Chappaqua’s Ian Karr, director of the IKA Collective, a NYC and LA creative agency, to talk about the film and about Martling’s resilience despite the break from Stern, and of his ultimate triumphs, too. Ian has known Jackie since 2001 when he first met him at the Friar’s Club and in 2006 produced Jackie’s Joke Hunt, an important comeback show for Jackie.  “I have always been fascinated by how unique he is,” he said. “Anyone who has ever known him knows he is a one of a kind person–especially people who have listened to him.”

As Karr set out to tell the story of Jackie’s life from his earliest days to get to the heart of what shaped him, he expressed a fascination with the Stern split too:  “It’s amazing that people still talk about it 20 years later. Jackie was willing to walk away from all the money. Psychologically speaking, I wanted to know how he did that,” he said.

But Karr, I extrapolated in watching the film, had a larger goal: he also wanted to convey Jackie Martling’s essence in a way that would surpass the Stern era, and emphasize the triumphs in his life: “We’d bring people on the show and then go have epic lunches or dinners at Carnegie’s after where people could see the light in Jackie, and how much they enjoyed being in Jackie’s company.”

Joke Man, running at one hour and 14 minutes, is a chronological account of Jackie Martling’s life. It tells the story of his childhood, the trials and tribulations of becoming a comedian, and all the twists and turns that got him on the Stern show. The film visits with key people in his life who speak openly and warmly about Jackie. The film also includes an array of personal photos from the Stern show and interviews with cast members from his inner circle. 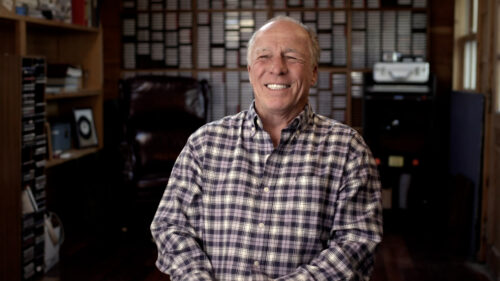 The goal is to portray a man who many call ‘the last American joke teller,’ to help preserve his unique style, related Karr.

Mission accomplished, as I agree that it’s a touching movie with lots of laughs–a combo that Jackie, being Jackie, will surely appreciate.

More than 80 hours of witness interviews, conducted by Lawrence L. Langer, one of the world’s foremost authorities on Holocaust testimonies were locked in a metal closet for decades and have never been seen by the general public. Now they have been finally thrust into the spotlight with the documentary film Soul Witness, The Brookline Holocaust Witness Project. In 2017, The film sold-out the 432 seat Coolidge Corner Theatre’s main playhouse within a few days of the release of its trailer and has sold out several screenings in the Great Boston area since.

A special screening of the film will be shown at the Bedford Playhouse on Thursday, November 1, 2018 at 7 p.m. The Bedford Playhouse, Home of the Clive Davis Art Center, is a recently renovated state-of-the-art film, arts and cultural center.

The documentary features a collection of interviews of Holocaust survivors, conducted in the early 1990s. Witnesses describe their lives before the war, growing intolerance; their lives during the war and the affect their experiences still had on them at the time of the interviews. Some of these witnesses survived death camps, some hid, others fought in resistance movements and many saved the lives of others.

Mark Skvirsky, Vice President and Chief Programming Office, Facing History and Ourselves on the film, “This film is important both for the stories that survivors share, but also for the way their voices are presented. The structure and tone of the film “humanizes” these individuals who might otherwise be perceived simply as victims.”

Following the film, there will be a question and answer period with the film’s writer, director and producer R. Harvey Bravman.

Director R. Harvey Bravman on the film, “These interviews contain some of the most epic and noble words I’ve ever heard. The stories and lessons from those who survived this unimaginable tragedy and who bravely shared their experiences 25 years ago provide an important message for our society. In many cases they talk directly about issues of intolerance, racism and genocide, as well as their immigrant and refugee experience.”

It is intended for a general audience with an advisory for children under 13.

More information on the film can be found at https://soulwitness.org.

More than 120 supporters and Friends of Neighbors Link, gathered recently to view the film “Food Chains,” at the Jacob Burns Film Center. Members of Latin Links hold this annual event that uses film to inform and educate the public around issues that impacts our daily lives as told through the immigrant experience. “Food Chains” is the award-winning documentary film exposé about an intrepid group of Florida farm workers and their battle to defeat the $4 trillion global supermarket industry through the ingenious Fair Food program, to improve working conditions for farm laborers in the United States. 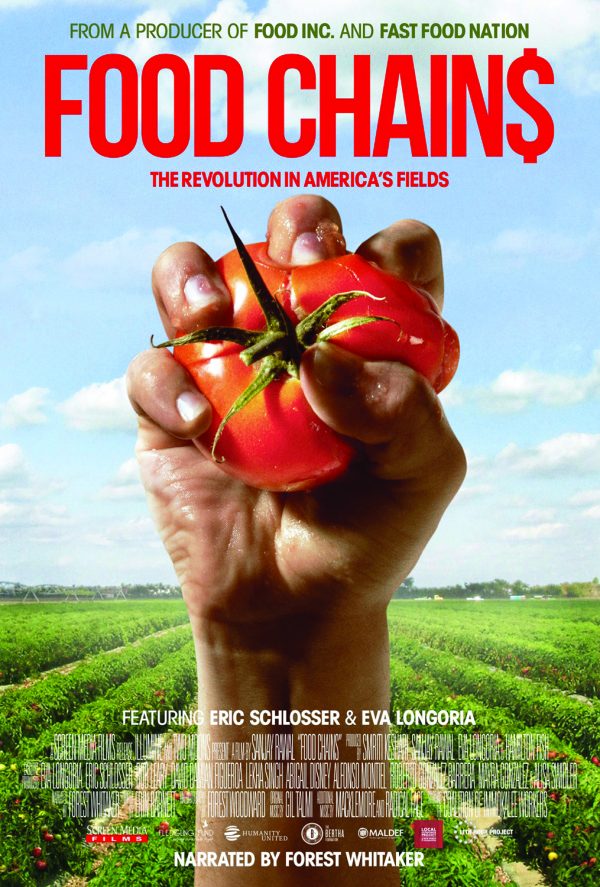 The New Castle Sustainability Advisory Board invites you to a screening of the award-winning documentary “Slingshot” on April 7, 2016, at 7 p.m. at the Chappaqua Library, 195 South Greeley Avenue, Chappaqua. 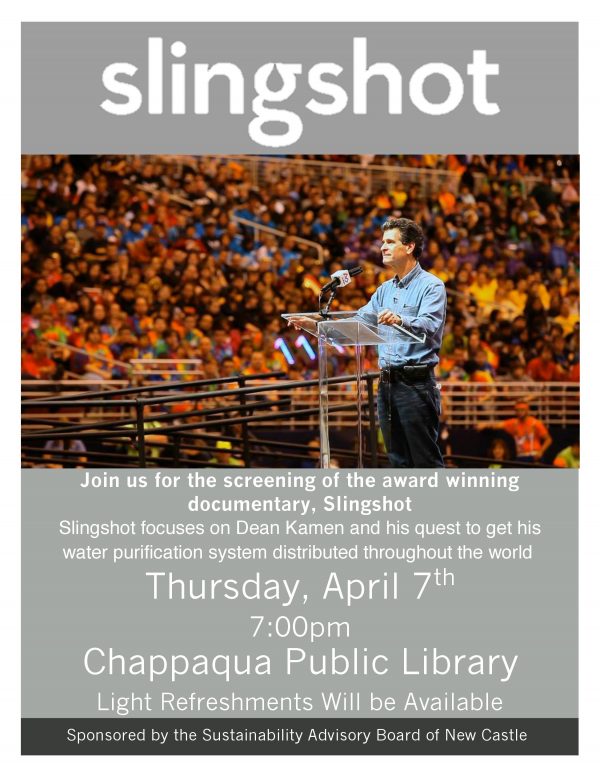 Slingshot follows Dean Kamen, a modern day Thomas Edison, on his quest to solve the clean water problem throughout the world. As well as inventing the Slingshot machine, Dean Kamen is also the inventor of the Segway and iBOT, a wheelchair that can travel up stairs. The Slingshot documentary has won many awards, including the “Best Documentary Feature” at the 2014 Florida Film Festival. Slingshot is great for all ages and light refreshments will be available.

The screening is free and open to the public.