Surviving a breakup is an experience that no one can relate to unless they are currently going through it. The intense and dark emotions will not go away with advice like, “time will heal.” I know, because I’ve had my heart shattered in what felt like it was tossed in a food processor.

At the time, I had supportive friends and family, but none who could truly understand my struggle. The days that follow immediately after are disorienting. It’s like you were hit by a wave and you don’t know which way to swim. Without warning you are forced into a new chapter of your life. There is so much loss in such a short amount of time and it is a loss you have no control over. Many individuals going through a breakup, including myself at the time, feel like the breakup is so specific to them. It’s as if the breakup was not supposed to happen to their relationship, maybe to other people, but this relationship was different.

For me, searching the web to find others that could relate was a lifeline. This was years ago, but Lonely Hearts Club was founded on the idea that when women come together to share their breakup stories, they are experts in helping one another navigate the heartbreak process.

A significant moment from a group was when a woman confessed her fantasy of reconciling. She said her mind was on a loop replaying a scenario where her ex comes back. The group let out a synchronous sigh of relief. Knowing they were not alone in these thoughts gave them comfort and allowed them to recognize that their breakup was not so specific to them.

As these women continued talking through this fantasy, they guided one other to recall the bad parts of the relationship. It takes one woman to share her story for others to feel less alone.

Since May I have been running groups with women across the country. Currently, it is setup as a virtual support group. Members are given a different theme each session, such as impact of the breakup, forgiveness, and confidence. The bond these women form by the end of the first hour is noticeable. Often members will exchange phone numbers and set-up a group chat to engage before the next session. They rely on each other when the craving to contact an ex kicks in or they need validation that they are not alone in their experience.

The community these women have built is one I want to continue to help foster. My goal for Lonely Hearts Club is for it to become a known resource for women across the country. Giving members a safe space to be vulnerable has helped many process their breakup in a productive way. Heartbreak can and often does lead to depression. By facilitating a breakup support group, the risk of depression decreases. In addition to running the groups, I want the club to be an entity that makes women feel less alone in their heartbreak.

When members first join the group it is evident that their self confidence is low and their functioning is disrupted by emotions of devastation and memories of their ex. At the end of each session, members set an intention for the week. The most common intention is to get through the week without looking up an ex on social media.

Setting an intention gives members small attainable goals, making the breakup process less overwhelming. Members value the group to hold them accountable for their intention. Whether they can stick to it or have a slip up, they know the group is on their side. After completing all eight sessions, members feel they have made exceptional progress in moving forward. They also come out of the group with newfound friendships.

When part of a group, loneliness is not so prevalent. Members express they feel like they are on a team and heartbreak is the opponent. These women are banding together to come out of their heartbreak on top. To inquire about joining the group, email nyclonelyheartsclub@gmail.com. Visit LonelyHeartsClubnyc.com. 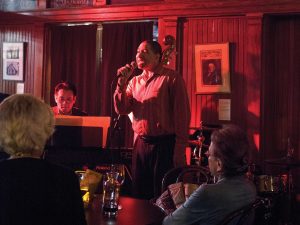 Looking for a cozy bistro with small romantic tables, farm fresh food and inventive cocktails where you can hear jazz on a Saturday night? Then head down to Chappaqua Station, opened by restaurateurs and jazz aficionados Erin and Peter Chase last year.

Like me, you may be surprised to learn that the place many see as the newest breakfast and coffee spot in town takes on a totally different persona at night, drawing on prime local talent as well as top musicians from Harlem and other parts of the city.

Wander in nearly any Saturday night at 7 p.m. when the lights go down low, replaced by the warm glow of candles and tiny twinkle lights on the ceiling, and hear the sultry tones of the latest jazz ensemble. Whether you are a jazz lover or simply a romantic, it’s the perfect date night venue.

The Chases transformed the timeworn 1902 Chappaqua train station into a beautiful eatery, restoring the old scarred interior so that the wooden walls, benches, and ceiling gleam much as they must have at the turn of the last century. The benches around the perimeter still serve as some seating and the former ticket office has become a full-service bar, with light from the train platform streaming in behind, adding to the atmosphere. 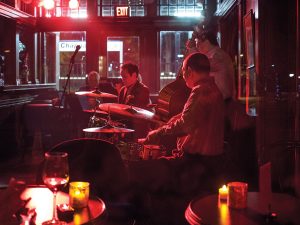 And that beauty is more than skin deep. “We built out the space with music in mind,” says Erin Chase, installing a mixing board and speakers “perfectly equalized for jazz.”

Hiroshi Yamazaki, whose Hiroshi Yamazaki Trio performed the night my husband and I discovered this charming jazz venue, confirmed that their efforts have paid off, citing the excellent acoustics as one of the reasons he enjoys playing there. Yamazaki, a classically trained pianist who studied jazz in New York as well as his native Japan, has performed all over the world, as have his bandmates bassist Steve LaSpina and drummer Tony Jefferson.

There’s a $10 per person cover charge for tables (no cover at the bar, which is first come first served), with tickets available via www.eventbrite.com or at the door. Reservations are suggested.

Upcoming talent in December includes the Daniel Lauter Jazz Quartet who will play at a fundraiser for Habitat for Humanity “Homes for the Holidays” on Dec. 3, 7-10 p.m. to raise money for four homes being built in New Castle. Tickets are priced between $50-500. Dec. 10, Latin percussionists Emedin Rivera and Ken Kresge Quartet. On Dec. 17, Erik Lawrence and Mala Waldron Quartet. See www.chappaquastation.com for additional events.

Marianne A. Campolongo is a professional photographer, freelance writer and jazz lover who lives in Chappaqua. Early on in their life together, she and her husband Rob used to haunt The Blue Note, The Village Gate, and other notable jazz venues, and they are both thrilled to live so close to this little gem.