Editor’s Note: So many families and fans of the Class of 2020 in the Briarcliff community are busy preparing to celebrate 137 seniors graduating from Briarcliff High School! Following spotlights in neighboring communities, we were delighted to hear right away as well from proud BHS family members about their own inspiring Class of 2020 graduates. Donna Mueller, who has spent nearly the entire pandemic voluntarily photographing local families, photographed these soon to be graduates, too. There are festive plans ahead: volunteers have been filming small groups of students at a time as the kids received their diplomas and tossed their caps on the game day field. All the footage will be put together for a compilation viewing at a Drive In concept to be shown at Lyndhurst Mansion in Tarrytown on June 19.  Congratulations from these families to their students, and congratulations from the Inside Press as well to the entire Class of 2020! 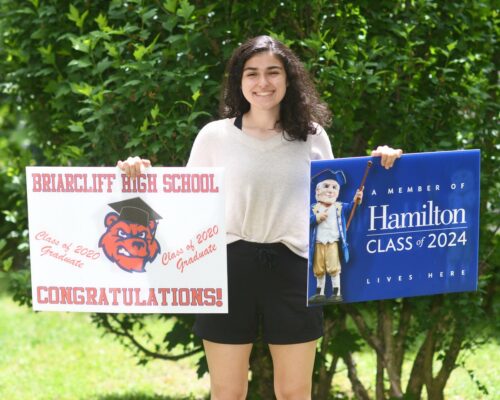 “Emily is a daily reminder of the possibilities that exist if you fight for your goals. Life has presented its challenges, including early learning and sensory differences. While she might doubt her abilities, she’ll still face any challenge. Through effort she excelled in honor and AP courses, achieved scholastic goals, and was accepted into her top college. When she felt helpless over the racism filling the news, she decided to help create change. She organized her peers and started a dialogue with her school to create action steps that support school inclusivity. She is an inspiration to persist despite fear.” 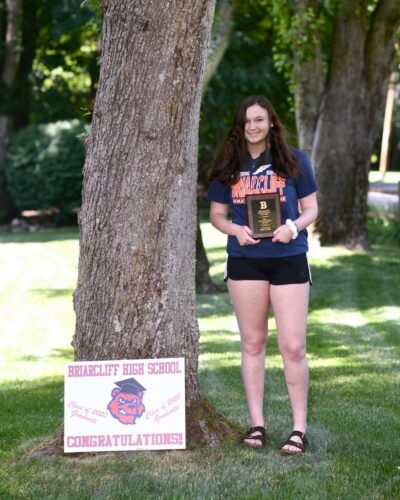 “Bailey entered Briarcliff High School from Pocantico Hills as a freshman.  A three-season athlete for all four years, Bailey played soccer, basketball, was co-captain of the swim and dive team, and was an award winning shot-put thrower her junior year.  She had hopes for another record this year, when her season was cut short by Covid-19.  Bailey was co-president of the Pediatric Cancer Foundation Club and turned her planned senior internship into a passion project with her basketball teammates where they donated time and resources to frontline workers.  Bailey is excited to attend Penn State in the fall.  Known as a friend to so many and always with a positive attitude we have been amazed by the resilience of Bailey and all of the seniors.  Presented with all of the challenges this pandemic has presented, they have all persevered.”

As the recorded soundtrack kicked in and the curtain opened on the stage at Pocantico Hills School, my eyes welled up. What the hell? I hadn’t had a kid there for four years. Seated in the refurbished auditorium with a friend to watch the middle school production of A Lion King, I surreptitiously dabbed at my eyes. I tended to shed a tear or two whenever my own children took the stage, but I didn’t know 95 percent of the kids in the show. Why was I getting emotional? It took me a few minutes to figure out that I was in the throes of an almost-empty-nester moment, a multi-sensory reminder of where my kids had been, where their love of theater had started, and with one in college and one about to go, it brought up a lot for me.

It was also just weeks since I’d watched my son play Caractacus Potts in Chitty Chitty Bang Bang at Briarcliff High School, the final three performances of his high school career. I was filled with pride, but also gratitude. The Briarcliff theater department had given my son, my daughter before him, and my family more than any of us could have predicted over the course of seven years. It was difficult to part.

Having enjoyed performing in the musicals at Pocantico under the direction of the wonderful Sheila DePaola, my children sought out theater in high school. And there they discovered much more than an after-school activity. They found their closest friends, their community. And they found passionate teachers and mentors.

Briarcliff’s program, which involves a fall drama, spring musical and a show of one-acts, is devoted as much to theater education as to the production itself. The outstanding director of the program, Ian Driver, loves the process of creation and development, and as a committed child-centered educator, he takes his students on the ride with him, always a great adventure that culminates in an incredibly enriching and collaborative theater experience.

Whether Shakespeare or musical comedy, theater depends on collaboration. A show is the epitome of team effort, and each member must pull his weight and honor her commitment to the whole for the show to come together successfully. With each production, the students gain a broader understanding of storytelling, the power of music, the tension of drama, the satisfaction of problem solving and the magic of performance. And they gain confidence. There is comfort in numbers. Teenagers who have never taken a dance lesson become tap dancers, in an ensemble. Students who have never swung a hammer become carpenters, part of a crew.

The theater welcomes budding divas and other talented young adults, some with beautiful voices, some with an innate gift for acting, some with excellent comic timing. But it also beckons the shy and the disenfranchised, the student who hasn’t enjoyed social acceptance in other spheres of school but finds belonging in building the set, singing in the chorus or playing in the pit. Theater can also bridge socio-economic and racial divides.

At Pocantico, almost every middle school student, regardless of their background, participates in the show, making those differences less apparent. The theater provides a home for those with artistic impulses but no other place to discover or exercise them. It’s a place to develop skills that may lead to a career or just wonderful memories. Ultimately, school theater programs offer students a unique, close-knit, artistic community that embraces differences, something not always found in the prevailing suburban sports culture.

We raise our kids here because of the excellent schools, the beautiful setting, an escape from the stresses of city living. But for some kids, the suburbs can become stifling and one-dimensional by the time they reach high school. Theater offers kids an escape from the mundane, an outlet that reaches beyond the confines of school. It also instills in them a love and reverence for the performing arts, something they can enjoy the rest of their lives.

The first time I teared up in the theater with one of my children was 14 years ago, when I took my daughter to see Beauty and the Beast; she was just seven or so. It was her first Broadway show, and it moved me to watch her react to the spectacle on stage, to remember the shows I saw as a child.

I have been moved by my own kids over the course of their childhoods as they performed in 25 productions and counting. I was moved by the realization that they worked so hard through the hours of repetition and waiting, the frustrations and obstacles, to reach that sweet moment when the orchestra plays the first notes of the overture, the curtain falls away, and they transform into characters inhabiting another time and place. That’s when I always feel a catch in my throat. The artistry and confidence they and their cast mates will exude over the next two or three hours never fails to blow me away. But mostly, I am grateful that they have known what it is to be part of something big and beautiful.