“Back in the day, there was bipartisan support for meeting mental health challenges,” Tipper Gore* said in a conversation with Jeffrey Borenstein, M.D, President and CEO  of Brain & Behavior Research Foundation, at the BBRF May New York City luncheon event, Breaking the Silence About Mental Illness. She told the attendees the common ground ‘worked,’ in that it eventually helped lead to the passage of the Wellstone bill which brought mental health parity to the workplace. “Sitting members on both side of the highest legislature of the land acknowledged there were mental health issues in families,” said Gore.

Today, Gore directs attention on mental health issues affecting middle school and high school students via her work with Tennessee Voices for Children (“there are 56,000 underserved children in Tennessee alone,” she said), and the Tyler Clementi Foundation, which focuses on anti-bullying and suicide prevention. She spoke of an alarming rise in the suicide rate among these younger people and a very concerning spike seen in girls. She expressed concern about a shortage of care: “We need more boots on the ground to have a greater impact.”

Gore also said that getting properly diagnosed and receiving the appropriate treatment when she herself suffered from depression provided “real relief,” pointing to the critical nature of BBRF’s efforts.

Dr. Borenstein said BBRF is the leading foundation for grants to scientists to effectively treat brain behavior disorders; since 1987, $394 million has been awarded to more than 4,700 researchers around the world, leading to $4 billion in additional funding.

BBRF funds “out of the box ideas for innovative research” which has led to important new treatments including the rapid acting antidepressant esketamine to treat refractory (treatment resistant) depression, and brexanolone for post-partum depression. “Every dollar donated goes to scientific research and 100% of the research is invested into grants,” he stated.

Gore’s participation in the day’s event was deeply appreciated by everyone at BBRF. “It was an honor and a privilege to have someone of her stature and with her passion help us,” said Chappaqua’s Lauren Duran, the BBRF Vice President for Communications Marketing & Public Relations.

*As Second Lady, Gore served as Mental Health Policy Advisor to the President, Her goals were to diminish the stigma surrounding mental illness and to bring awareness to the need for affordable mental health care. In 1999, Gore hosted the first White House Conference on Mental Health. That same year, she launched the National Mental Health Awareness Campaign (NMHAC) to encourage Americans to seek treatment for mental illness. Gore has frequently spoken about her own experience with depression and treatment following the near-fatal injury of her son Albert.

I love being a publisher and editor and proudly covering a wide swath of Northern Westchester! But like most people, sometimes I do experience a bout of the blues, for any number of reasons. I also recognize that the reasons are circumstantial. In the last month or so, I lost my father, a 96-year-old Holocaust survivor, and grandfather of four. I simply miss him to pieces, especially as I approach a First Father’s Day with him gone. Nonetheless, I know the blues are not a medical diagnosis. They are a state of mind that can be helped whether by say, leaning on friends and family, keeping a journal or maybe taking long meditative walks. The more ‘serious’ depression and all its potential consequences continues to challenge scientists around the world. So I was glad to attend an event by the Brain & Behavior Research Foundation who make it their mission to support advances in this area; my report: https://www.theinsidepress.com/tipper-gore-breaking-the-silence-about-mental-illness/ 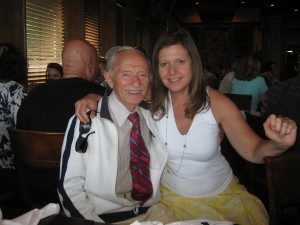 But back to my dad. As I consider that he’s gone, I also understand that his legacy will never leave me, and I intend for it not to leave this world either. The dangers of silence are all too clear. I attended a May screening of the movie Complicit at the Chappaqua Performing Arts Center. It was stunning in its revelations of what led to 937 terrified Jewish passengers aboard the SS St. Louis being sent back to Nazi controlled Europe–first by Cuba and then so sadly by orders of the state Dept. and President Franklin D. Roosevelt. Over 250 of the passengers aboard were later killed–but it was the ramifications which were far worse: The horrific rejection gave Hitler exactly what he wanted: a perfect opportunity to “prove” to the world that Jews were expendable. #NeverAgain

Everyone knows a survivor’s best revenge is a long and fulfilling life. I’m thankful that my dad with a life well lived offering inspiration to many. Please be sure to read our entire edition and all its amazing stories! I’m grateful for our team and contributors who ‘share the heart of your community.’ Wishing you all peaceful and love-filled graduation ceremonies, if there are any in your household, and of course, a Happy Father’s Day.

NEW YORK, N.Y. (June 15, 2015)—The Brain and Behavior Research Foundation (the Foundation) held its second annual New York Women’s Luncheon, Breaking the Silence on Mental Illness, at the Metropolitan Club. “The Women’s Luncheon is designed to pay tribute to those women who are willing to speak candidly and personally about mental illness and how they inspire others to speak out against the stigma from brain and behavior disorders,” states the Foundation’s President and CEO Jeffrey Borenstein, M.D. “Now it’s our turn to be proactive in breaking the silence,” says the Foundation’s New York Women’s Committee Co-Chair Carole Mallement. Addressing the topic of stigma and how to face mental illness without fear of judgment departs from the Foundation’s standard programs that focus on science and research. 100 percent of dollars raised for research are invested in grants leading to advances and breakthroughs in brain and behavior research to help better understand the causes and develop new ways to effectively treat brain and behavior disorders. Since its inception in 1987, the Foundation has raised $328 million to fund over 4,800 grants to more than 3,800 leading scientists at 518 universities and medical centers around the world.

Approximately 300 supporters were in attendance to listen to a conversational exchange between Editorial Director Ellen Levine of Hearst Magazines and Advocate, Author, Philanthropist Lee Woodruff. Levine received the first annual Media Award by the American College of Neuropsycho-pharmacology for highlighting mental illness in numerous articles published in Good Housekeeping. Woodruff discussed a family history of mental illness. She recalled, when she was younger, there were no real in-depth conversations or explanations as to why her mother was “in bed in a dark room under the covers.” Her father would simply say her mom was sad and needed to feel better.

Woodruff shared her personal struggle with situational depression that ensued after husband Bob Woodruff sustained a critical brain injury from a roadside bomb in Iraq in 2006 while reporting for ABC’s World News Tonight. Woodruff acknowledged the traumatic event took its toll on her own mental health. Woodruff described her situational depression as a secret sadness and that it came as an enormous relief to share her story. “There needs to be a national message of openness without shame or stigma attached,” states Woodruff. When Levine asked Woodruff what helped her to push through the secret sadness, Woodruff referred to the four Fs—family, friends, faith, and funny—mentioned in her book, In an Instant, wherein Lee and Bob Woodruff chronicle their inspirational family journey back to recovery.

Today, the Woodruffs are fully focused on giving back in a big way. Bob and Lee Woodruff founded the Bob Woodruff Foundation that has raised more than $20 million to help veterans successfully reintegrate into their communities and help veterans receive critical longterm care. The Bob Woodruff Foundation’s website mentions that, sometimes, injuries sustained can lead to a series of other issues — unemployment, depression, substance abuse, even suicide. “Our veterans deserve our full support,” states Woodruff.

Janine Crowley Haynes, Chappaqua resident and author My Kind of Crazy: Living in a Bipolar World