Mount Kisco–A packed and festive Centennial Kick off Celebration at Northern Westchester Hospital brought together physicians, board members, employees, volunteers, elected officials, supporters, artists and many others who gathered for a proud CEO’s remarks, refreshments galore, the unveiling of an interactive history timeline and a ribbon cutting ceremony; they were also treated to stories of health care delivery in the early 1900s. In his remarks, President and CEO (for 15 years) Joel Seligman reminisced about days gone by and just how far we’ve come. 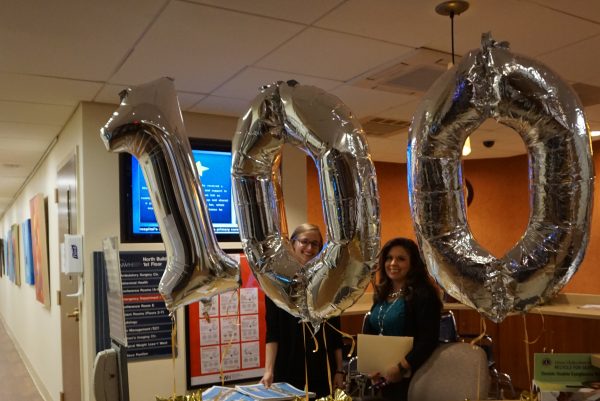 “Surgery was often done on your living room table,” said Joel Seligman, NWH president and CEO for the last 15 years. “Surgery was done on your dining room table—yes, house calls were common then—because the nearest hospital was in New York City. And you got there via a bumpy, horse-drawn wagon driving down the pot-hole ridden Albany Post Road, now known as Route 9…

“Once you got to New York City, an ambulance met you and took you to the hospital. And this only happened for the fortunate few who had the financial means for this type of care.”

Seligman recounted that it took “a handful of forward-thinking community members” to begin fundraising; after 10 years, “this group of visionaries raised $12,500, and opened the 15-bed Mount Kisco Hospital on August 20, 1916, which served the 14 villages in the surrounding area.”

100 years later, Seligman said the mission is still “to provide the highest quality, patient-centered care close to home for all members of our community–regardless of their ability to pay.”

“Of course, so much has happened between our humble beginnings in 1916 and today: advancements in technology, our enhanced clinical capabilities, the growth and modernization of our campus, and most importantly, the positive impact we continue to have on the people who live in our community.

Nancy Karch, chair of the Northern Westchester Hospital Board of Trustees offered more kudos to the hospital’s role in the community–“whether it’s the dad coming to NWH via ambulance with chest pains…the grandfather who needs a new hip…or the mom who is going through radiation therapy for breast cancer…” She also took the opportunity to note that NWH is now a member of the Northwell Health network of 21 hospitals, “including facilities that specialize in pediatric and psychiatric care.
“It has a pioneering research facility, The Feinstein Institute for Medical Research, and a visionary approach to medical education at the Hofstra Northwell School of Medicine and School of Graduate Nursing and Physician Assistant Studies,” said Karch. “We are very excited about this new Chapter in our history.”

“It has a pioneering research facility, The Feinstein Institute for Medical Research, and a visionary approach to medical education at the Hofstra Northwell School of Medicine and School of Graduate Nursing and Physician Assistant Studies. We are very excited about this new Chapter in our history.”
Karch recognized the following attendees as well:

— Her fellow Board of Trustees, Alumni Trustees, Foundation Board members and President’s Council Members.

She offered “a very special welcome” to Northwell’s Dr. Lawrence Smith, Physician in Chief and Dean of the Hofstra Northwell school of Medicine and Gene Tangney, Senior VP and Chief Administrative Officer..

Seligman returned to the mic after a host of remarks from elected officials and others and invited guests to view the historical timeline, He thanked “two long-term community partners, GG Kopilak and the Katonah Museum Artists Association (KMAA) and Lois Barker and the Westchester Photographic Society. And added: “KMAA provides the artwork you see in the hallway and WPS provides the photographs that adorn our Cancer Treatment and Wellness Center. Thank you both for providing the gift of art to our patients and families.” 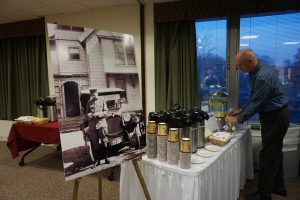 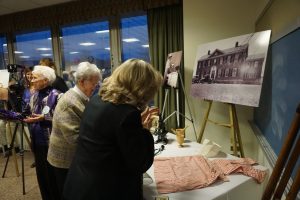