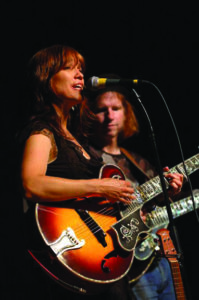 For more than two decades, husband and wife team Pete and Maura Kennedy have performed on stages in the U.S. and the U.K., as a folk/pop duo and as members of Nanci Griffith’s Blue Moon Orchestra. Now for the first time ever the show will be one of the inaugural events in a special benefit concert at the new Chappaqua Performing Arts Center (ChappPAC), formerly known as the Wallace Auditorium on the Reader’s Digest campus. The benefit concert titled “Life is Large” at 8 p.m. on Friday, September 22 will raise funds for the Axial Theater, a professional theater company founded in 1999 that is a member of the Westchester Arts Organization. Axial Theater presents contemporary theatrical hits, timeless stage classics and original works in addition to hosting a bi-monthly Sunday Writers Series for play development.

The Kennedys have released over a dozen CDs, are longtime core artists on metropolitan New York’s jazz radio station WFUV and were named Artists-in-Residence at The John F. Kennedy Center for the Performing Arts.

Their original music has been described as uplifting, encouraging and empowering, and their choice of covers is emblematic of their love for the classic songwriting of Buddy Holly, The Beatles and Bob Dylan. Long time New York City residents, they are regulars at the Clearwater Festival in Croton-on Hudson and have played legendary venues including Carnegie Hall, the Beacon Theater and the now defunct Bottom Line.

Tickets for The Kennedys’ Axial Theater benefit are $45 and can be purchased online by searching for “Axial Theater” at brownpapertickets.com. ChappPAC will play host to a variety of cultural events in its inaugural season through December including children’s concerts, jazz performances and family movies.