It was hard not to catch the cowboy vibe, but also the intense volunteer dedication to ECAD, during this May event at the Brynwood Golf & Country Club in Armonk. Most of all, it was a chance to hug and pet and feel an ever growing respect for every Service Dog ECAD trains–and understand the difference these dogs have made in so many people’s lives for so many years. All that and more at ECAD’s fifth Denim Heels Boots Tails event which raised funds for its programs of training Service Dogs for People with Disabilities. For more information about ECAD, visit: www.ecad1.org   Photos by Grace Bennett/The Inside Press 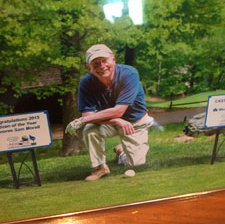 Article and Photo by Matt Smith

Friends, family, and Chamber members gathered at the Whippoorwill Club in Armonk, NY on the evening of May 12 to celebrate longtime Armonk resident Sam Morell, and his achievement of being named 2015 Citizen of the Year by the Armonk Chamber of Commerce.

The award is bestowed – as it has been twice before, first to Dr. Evan Powderly of Crittenden Middle School in 2013, and second, last October, to Hickory & Tweed proprietor Skip Beitzel – to an individual who has made a significant long-term contribution to the North Castle/Armonk community. A “natural choice” for the honor, Mr. Morell more than fit the bill.

“He’s been a real pillar of the community,” says Jason Rosenzweig, a member of the Chamber and coordinator of the evening. “He has been instrumental not only in the town’s cultural advancement, but the growth of the business community as well. He’s so supportive of everyone.”

But why shouldn’t he be? asks the grateful Morell himself. “After all,” he theorizes, “the town we live in is simply an extension of our house and there are many ways one can add value to make this very large house appealing.” To that end, he states, with a smile, “I strongly believe in patronizing our [local] services.”

His seven-year involvement in the Chamber of Commerce has certainly impacted how he carries out that belief. “The more you learn about fellow members the more you develop the kind of relationship and trust to transact with them,” he explains. “I now use many chamber members for my personal and business matters.” These members include Steve D’Angelo, from Stephen D’Angelo CPA PC, as his accountant; Robbi Morris, from The Morris Group, as his health care insurance provider; the aforementioned Jason Rosenzweig, from Castle Cabs, as his car service provider; and Julie Dickens, from Beascakes Bakery, from whom he buys all his holiday cookies. Adds Morell, “The joy for me is developing new and interesting personal friends from all walks of life, as well as knowing that I can be of assistance to their goals.”

His support of the community doesn’t end there. He found a way to combine his overwhelming love for the town of Armonk with his undying love of the performing arts, and began his own not-for-profit company, the Small Town Theatre Company, in 2008.  Co-founded with Katonah resident Donna Garr, the organization produces plays, summer concerts, theatre festivals, and film festivals in Armonk and Katonah.

Morell also says he leverages his enjoyment of photography and videography to support other local organizations, such as the North Castle  Historical Society, the North Castle Communications Committee, and other Westchester-based not-for-profits.

Preceding the dinner was an afternoon-long golf outing, attended by Morell, Rosenzweig, and a mix of Chamber members, guests of Chamber members, and Morell’s personal friends, that was anything but a bogey. “We enjoyed it very much,” comments the honoree. And what of his score?  “It was touch-and-go at first, but I broke even,” he says with a laugh.

To discourage any self-doubt among each players’ golf abilities, the outing was run as a scramble; each player hit their own shot from the tee, but everyone played from the spot of the best shot. In the end, “it worked out for everyone,” says Rosenzweig. “It was a lot of fun.”

And as for the recognition itself? “I’m overwhelmed and honored,” Morell says quite simply. “It’s a real tribute.” Humble as ever, Morell added: “Everyone in this town does such tremendous work, and we should recognize that.”

The entire celebration was presented by the Armonk Chamber of Commerce. The evening’s cocktail hour, which followed the golf outing and preceded the dinner, was sponsored by Breezemont Day Camp and the Castle Cab Corps. Throughout the evening, volunteers sold tickets for a raffle, a new addition to this year’s festivities; all prizes and rewards were complete donations from local Armonk businesses, including Certa Pro Painters, Eye Designs of Armonk, Susan Blake, and Peachwave Frozen Yogurt. For more information on the chamber, visit www.armonkchamberofcommerce.org. 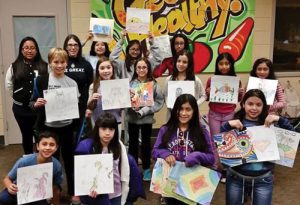 Susan Hovey, Boys & Girls Club  after school art coordinator commented, “the students and I were excited to be invited to participate! The Junior League of Northern Westchester educated over 30 of our kids about Northern Westchester Hospital, the value of voluntarism and how they can help do something nice for others through their art.” Twenty-four original pieces of B&GC artwork will be featured in the NWH Pediatric Family Room. The framed art along with all other works will also be copied onto placemats to be shared during meal-times. The original art will also be used as healing ‘gifts’ by the Pediatric Unit and within the Emergency Room. In addition, cards containing well-wishes will also be distributed during the project’s six-month installation. JLNW Project Chair Christina Dochtermann commented that, “The art will lift the spirits of patients, families and staff with visual messages of healing and well-wishes. It helps to humanize the environment and create a healing connection to other youth and the community.“

When they are ready to leave, patients and their families will be invited to make a card or picture to leave in the room for the next patient as a way to continue the cycle of the Healing Power of Art and Community.

“This project is very special. It is a wonderful way to connect with the young people in our community and to teach children that they can make a meaningful difference in the lives of others,” said Keeva Young-Wright, President of the Northern Westchester Hospital Foundation.

The JLNW will be collaborating with various youth art programs and schools throughout Northern Westchester to feature new art every six months. If your group would like to participate, please contact the JLNW at 914.234.4714 or info@jlnw.org. To learn about other ways to support Northern Westchester Hospital, please visit www.nwhc.net.

On Sunday, October 20th, more than 40 Bet Torah Nursery School staff members, parents and friends of the Nursery School, along with members of the Bet Torah Hebrew High School Mitzvah Corps, joined together at Manhattanville College for the annual American Cancer Society’s Making Strides Against Breast Cancer walk. This was Bet Torah’s largest team ever. There were smiles and cheers all around as the group walked through the starting line to begin their five-mile walk through the campus of Manhattanville and through the streets of Purchase. This year, the Mitzvah Makers team raised almost $7,000. This brings the team’s five-year total contribution to Making Strides to approximately $47,000 (ranking #19 of the 642 participating teams). After the walk, all enjoyed a delicious tailgating brunch, hosted by a Bet Torah family. This year, Dr. Cary Goltzman (husband of Morah Kathy) again enerously provided delicious home-smoked salmon.

Funds raised through Making Strides Against Breast Cancer are used to find causes and cures for breast cancer, to help people get well and stay well from breast cancer, and to empower people to fight back against breast cancer.

On its 20th anniversary, FECA is  expanding its mission.

On Saturday, November 15th, 2014, the Foundation for Empowering Citizens with Autism celebrated its milestone with a gala fundraising evening of dining, dancing, casino games and a silent auction at the Westchester Marriott in Tarrytown. Attended by 225 FECA benefactors and their guests, the “Back to the Future” themed event honored the organization’s accomplishments and looked ahead towards its new goals of expanding employment and volunteer opportunities for young adults with autism. FECA also holds a large fundraiser every spring in New York City, where it has a number of dedicated corporate sponsors.

“FECA’s work has been so profound over the past 20 years that we have begun to inspire the next generation of autism advocacy among our young people,” noted emcee Philip Orlando of Chappaqua, one of FECA’s founders and a foundation Director, as he introduced the Presidents of the Horace Greeley High School Autism Awareness Club and Fox Lane High School Autism Speaks Club.

An Original Need for Education

FECA was founded by eight Westchester families in 1994 as the Foundation for Educating Children with Autism, with a mission to create a school to provide the most proven effective one-on-one therapy based on Applied Behavior Analysis. At that time, the diagnosis of autism was 1 in 10,000; in 2014, alarmingly, one of every 68 children is diagnosed with Autism Spectrum Disorder.

The resulting Devereux Millwood Learning Center, opened in 1996 to  12 children and now educating 48 students between five and 21, emphasizes vocational training and community integration to prepare them for adulthood. In 2009, FECA again partnered with Devereux to establish the Devereux Millwood Adult Program, which currently transports 18 young men in vans to job and volunteer locations across Westchester.

This year, in recognition of the maturation of the group FECA was formed to serve, the organization has both changed its name and launched new initiatives to broaden opportunities for autistic adults with an eye towards fuller community integration.

The Opportunity Network for Employers and Employees (“ONEE”) reaches out to local businesses and non-profit organizations to identify and match autistic individuals with specific skill sets to such opportunities, and Extraordinary Ventures New York (“EVNY”) will create small businesses to provide meaningful employment for autistic adults suited to their skills and interests.

With its evolving mission, FECA  will continue to change many lives by translating what young people with autism spectrum disorders are interested in into lasting productivity and lifelong fulfillment.

To learn more about FECA or support its mission, visit www.fecainc.org

Debra Hand is a longtime writer and editor for Inside Chappaqua.