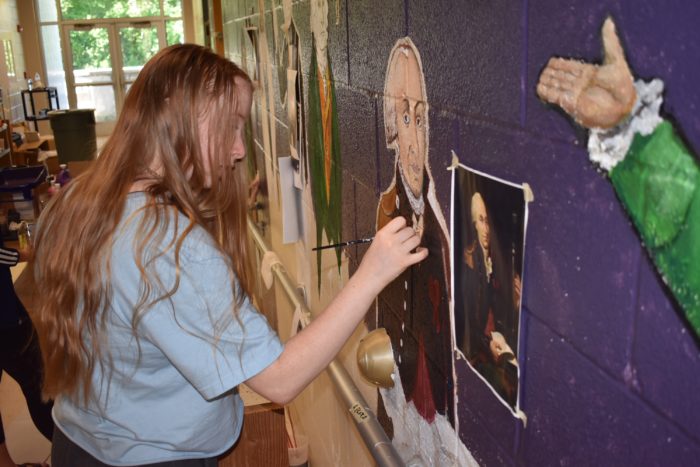 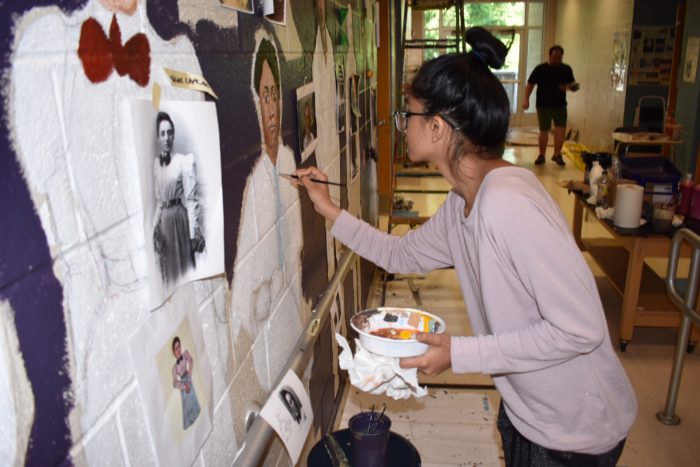 At Byram Hills High School, unwelcoming hallways full of cold, bare cinder block wall have become the oversized canvas for colorful, creative and incredibly detailed paintings celebrating subjects like literature, history and chemistry. These eye-catching, collaborative pieces of hallway art have sparked conversation, and maybe even some inspiration as well.

The murals of Byram Hills, created every other springtime, are the product of visual arts teacher John Anthony Lopez, who works with other educators to transform curriculum into carefully crafted artwork. In total, a mural will take 18-months to complete, with students involved in its production the whole way. From the beginning, the jobs of research and image input fall upon students who are taking courses in the mural’s subject area. Later, the mural is finished off with a four week period of painting by Mr. Lopez’s advanced drawing and painting class.

“The goal is, first of all, to create a lasting testament to the students and the curriculum, but also to give students an experience in creating public art,” Mr. Lopez said. “It’s something they can come back to in years, and even decades to come.”

Each mural features an abundance of historical figures, sites and works of art or literature that relate to the curriculum. The murals are painted in the proximity of the classrooms where the subject is taught, sometimes bringing several stretches of cinder block to life.

“They’re an expression of the importance that our faculty sees in their curriculum, and in different ways of expressing it,” Mr. Lopez said. “And it shows a love of the material.”

The first mural came about in 2008 when Aaron Lockwood and Marna Weiss of the Music Department worked with Mr. Lopez to make the band and orchestra space feel less industrial in a way that incorporated the curriculum. The result was the two-part band and orchestra mural that features famous artists from Duke Ellington to Mozart.

Mr. Lockwood, the only teacher whose mural is inside a classroom, still refers to it a decade after its creation.

“I find it especially inspiring when I can point to a face on the mural, and make a connection to the composer and/or the style of music being played in class,” he said. “Recently, to generate a conversation about the Mozart piece that we were learning in class, I pointed to the wall and said, ‘Mozart is watching. If he were to comment on your articulation, what would he say?’”

After this success, murals were produced for World Languages, Chemistry, World History, and Literature in 2010, 2012, 2014 and 2016 respectively.

This spring, the sixth and most ambitious mural to date, was created. It’s called “The Evolution of Physics,” named after the title of Albert Einstein’s famous book.  The mural covers two 30-foot walls that face each other, and features over 30 noted physicists from across history.

For the first time, this mural features 3D elements such as a solar system and golden spheres traveling downhill to demonstrate acceleration. In an interactive twist, QR codes have been included throughout the work of art, which can be scanned for more information (this project is not yet completed; biographies of the physicists that can be viewed once the QR code is scanned are being worked on by current physics students).

Hidden in this mural are meanings and metaphors left for visitors to uncover. Why is Johannes Kepler dropping the apple onto Isaac Newton’s head? Why is Einstein looking toward Newton across the hall? In this mural, placement of the figures is all relative, stimulating realizations and reinforcing material learned in the classroom.

“It’s that surprise factor,” said physics teacher Paul Beeken, who spearheaded the mural with Mr. Lopez. “We’re hoping this will be the hook to keep students interested. By design, this wall involves dozens of different themes all running concurrently. That’s the whole point. We want them to come back to the wall four and five times, and each time see something different. It’s complicated on purpose.”

Dr. Beeken, whose excitement for this project is driven by his passion for physics, hopes the mural will generate student interest in the sciences.

“I’m not trying to turn them into scientists per se, but I do want them to appreciate its importance in their lives,” he said. “I’m shameless in trying to get kids hooked on the idea of learning how science serves them and the framework for understanding our world.”

How successful the mural will be at generating interest in the sciences has yet to be seen, but one thing is for certain, it draws plenty of attention.

“The walls were really bland before,” said Danielle Cronin, a rising senior at Byram Hills High School who assisted with the painting of the physics mural. “I think the mural really makes people come to the physics hallway to figure out what the mural is about.”