With a warm-up act of über hip band, Echosmith, and an army of young volunteers escorting the press and manning walkie talkies like old hands–plus a diverse crowd representing every color, age and background–it was clear on Saturday that Hillary Clinton’s official campaign kickoff on Roosevelt Island was pure 21st century.

Arriving by tram to one of Manhattan’s gems is always a thrill, but on Saturday morning, even more so–crammed in with excited Hillary fans some from as far away as Texas. The new FDR Park is still under construction but looked beautiful against the Manhattan skyline with the UN in view just across the river.

With no further adieu, no warm up speeches, no Cuomo or DeBlasio in sight, Secretary Clinton was announced…and the crowd went wild. Toddlers waved flags from dads’ shoulders and many wondered if they were watching history being made. 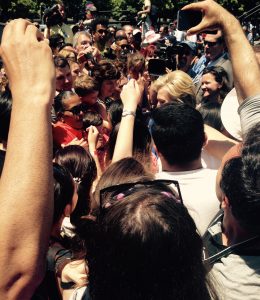 Clinton spoke of her most passionate causes: preschool for all children, womens’ and immigration rights and inclusion for all members of society. The poignant story of her own mother, abandoned as a child, held the crowd rapt. Dorothy Rodham credited the kindness of others with her survival; a lesson the Secretary made clear she embraces.

The Secretary ended to rapturous applause as she rallied her base for the long fight ahead. Fight is a word that came up often, even in the campaign’s Spotify playlist. One has the sense that she is 100% ready for it.