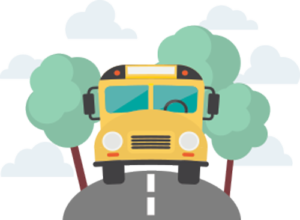 When I was five years old and living in a different New York suburb I remember walking down the street to the nearby bus stop where that exact Big American Yellow Bus of our collective imagination would transport me to kindergarten. I may have been a bit of a nervous kid as, to me, the actual bus ride was fraught with near constant fight or flight scenarios. I even recall the peaceful serenity of the mostly empty bus heading home being shattered by an awkward exchange of glances between myself and the bus driver’s reflection in the rearview mirror. I was further embarrassed when he asked me, “Are you okay?” as I rushed off the bus. Ugh.

For my family the bus stop was a fantastic way to meet people and get a sense of the neighborhood.

The bus stop situation itself did not help my state of mind. The brief walk down the road from my house was placid and felt safe. We kids would gather at the corner of a cul-de-sac where six or seven of us would bop around, generally geeked up for the day ahead. I must have inadvertently had a semi-existential mentality as the coming bummer of actually being on the bus never seemed to even slightly intrude upon whatever fun was taking place. That is, unless the Dad who owned the house where the bus stop stood happened to be awake. Ugh (again).

It was a very suburban school bus stop on a corner with a modest but pristine house with an equally well-maintained and carefully nurtured lawn. We kids would play tag or toss a ball around and inevitably someone would stray off the sidewalk and trod upon the glistening green turf. These were teeny five and six year old sneakered feet not keeping off the grass yet the homeowner, as if his lawn was alarmed, would invariably bolt out of his kitchen in his boxers to yell at us as if we were taking a backhoe to his monument of domesticity. That his daughter was amongst our gang did not make this awful and not uncommon display any more pleasant.

I’m happy to report that no major emotional damage to yours truly seems to have lingered and I’ve grown up to be a parent myself here in this bucolic part of Northern Westchester. I’m not sure if it’s interesting and/or ironic but upon our move here, I realized that I am now a Dad with a busy school bus stop right in front of my house! My therapist might believe that an early morning, underwear-clad confrontational jaunt aimed at some boisterous elementary school students might be emotionally illuminating for me but my wife disabused me of this notion. Thank you Laurie.

My son was six when he began waiting at the bus in front of our house. Nowadays there are no children without parents or babysitters. I was pleased to see this because I believe with adults involved the bus ride itself would most likely have a far less Darwinian atmosphere. For my family the bus stop was a fantastic way to meet people and get a sense of the neighborhood.

It’s actually quite amazing what you can learn about other human beings early in the morning on a daily basis. The kids were incredibly cute and witnessing their start of elementary school is mostly wonderful. Within the daily milling around you get to know the kids and their attendant adults. I found it fascinating that some of the shyest kids had the most outgoing parents and the reverse was true as well. Sure, situations would arise where, as a Dad, you’d have to talk to another parent about their kid and some real or imagined offense. My boy, on occasion, was victim or perpetrator. For kids this young, 99% of the time it all amounted to nothing and tomorrow was a fresh beginning.

Perhaps the most poignant experience from those days was a neighbor who was very ill yet continued to walk her kids to the bus stop every day. It got to the point where other parents would physically support her so she could stand upright and watch her children play and get on the bus. Sadly, she passed away but her devotion to spending every available moment with her daughters was inspiring and beautiful. I’m certain that courageous effort will never be forgotten by her girls.

A couple we are friends with were once bemoaning the fact that their son’s bus stop consists of only him. The term “bus stop envy” comes to mind when they often imagined the fun of sharing that daily experience with other kids and adults. I initially laughed off their concern and thought of an angry father ranting at young children in his underwear. Then I considered our more recent experience and agreed with them that, yes, there is a lot of nice things about standing at the bus stop with your kid and other families every day of the week.

Dan Levitz is an art dealer, Chappaqua dad and frequent essayist for Inside Press publications.