On Monday, February 7th, from 6-7 p.m., the Chappaqua School Foundation (CSF) bringing back its “At Home” series with a live, virtual culinary experience featuring nationally recognized Chef Dale Talde of Goosefeather in Tarrytown. The chef will host a fun hour of cooking along with instructions to whip up a signature cocktail. 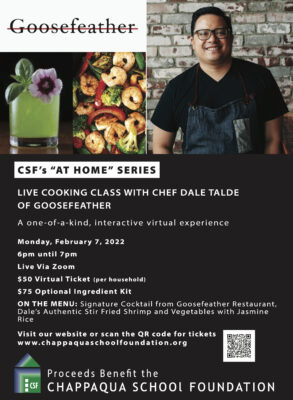 This event offers ticket holders a chance to grab a coveted seat at the restaurant, selected by ESQUIRE as one of the “Best New Restaurants in America, 2020.” The cost of tickets are $50 per household. Proceeds from the event benefit the Chappaqua School Foundation (CSF), a non-profit recognized as tax-exempt under Section 501(c)(3) of the Internal Revenue Code.

For further convenience, attendees have the option to purchase a $75 recipe ingredient grocery bag courtesy of DeCicco’s in Millwood. Participants will be responsible for scheduling and picking up the bag on February 6. Details will be sent via email following registration for the event.

Prior to opening the acclaimed Goosefeather in Tarrytown, Filipino-American chef Dale Talde made a name for himself with his eponymous restaurant, TALDE, which opened in Brooklyn’s Park Slope neighborhood in 2012. He went on to open a TALDE in Miami, Florida and in Jersey City, New Jersey. Dale debuted his first project in Manhattan with the opening of Massoni at the Arlo NoMad Hotel in November 2016. His second Manhattan restaurant called Rice & Gold opened in October 2017 at the 50 Bowery Hotel in Chinatown. In Florida, Dale also had three locations in the food hall Grandview Public Market in West Palm Beach. They were called The Corner, Clare’s and Little Red Truck. Dale was also a three-time cheftestant on Bravo’s Emmy Award-winning culinary show, “Top Chef.” He competed in Season 4, “All Star” Season 8, “Top Chef Duels”, and became one of the show’s most popular cast members. Dale has competed on “Chopped,” “Iron Chef America,” “Knife Fight” and was also head judge on “Knife Fight” Season 4, as well as guest judge on both “Chopped” and “Beat Bobby Flay.”