Armonk resident Marlene Fischer holds many titles. Besides being a mom, wife, lifelong writer, blogger, and a college essay editor, she jokingly adds “food shopper” and “stain removalist” to her list of roles. Raising three boys, it often seemed like food shopping and laundry were her main gigs. Book author, however, is Fischer’s newest title.

Never imagining that she would one day write a book, Fischer just successfully self-published her first book, Gained a Daughter But Nearly Lost My Mind: How I Planned a Backyard Wedding During A Pandemic. (Editor’s Note: Order on the net or inquire at your favorite local bookstore or gift store for availability.) 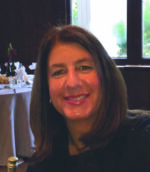 A new empty nester, with her youngest son away for his freshman year at college last year, Fischer was just acclimating to her new life and blogging about it when the pandemic began. She suddenly found herself with her husband working from home and the two of them sharing a very full house with all three sons and her oldest son’s fiancée at the start of the pandemic.

Navigating meals, everyone’s needs, a never-ending mess, and the challenges of a pandemic became the subject of Fischer’s hilarious and poignant musings on her Facebook page blog, which currently boasts about 12,000 followers.

The title of her Facebook page, “Thoughts From Aisle 4,” was suggested by her oldest son, and derived from her voicemail message on her phone for many years; “Sorry I missed your call. I’m probably in Aisle 4 at the grocery store. I will call you when I’m done.”

“A Source of Light”

Inspired by Erma Bombeck’s irreverent writing, Fischer is relatable and humorous. In addition to posting on topics such as handbag shopping, aging, politics, and random observations about life, many of her posts relay stories about the frustrations and joys of raising her three boys. For younger moms, it brings hope to see that no matter your worries, they all turn out just fine, just like Fischer’s bright young responsible sons. Judging by her followers’ comments, the page has been a source of light, humor and silver linings throughout many months of quarantine. It was easy for readers to feel emotionally invested in Fischer’s excitement over her oldest son’s impending nuptials and the trials and tribulations of planning a wedding during a pandemic. Many could relate to Fischer’s excitement over her relationship with her new daughter-in-law with stories such as being invited by the bride to help choose a wedding dress. Fischer believes the wedding planning was so captivating to her followers because “it was a good distraction for everybody” during the anxiety-ridden quarantine period.

Realizing that the couple’s planned wedding, a large fancy event originally planned in Washington D.C., the bride’s hometown, was no longer possible due to Covid, they decided to get married on their intended wedding date in the Fischer’s backyard with only close family members attending. “My goal was to make it so amazing that they wouldn’t want another wedding,” explains Fischer.

Fischer describes the backyard as having looked magical between the tiki torches, the tables, and the landscaping and plantings that Fischer’s husband had painstakingly tended to for weeks. The family incorporated beautiful and meaningful Jewish traditions throughout the wedding.

The wedding was an Armonk celebration in every way. There was a drive-by parade of local friends and neighbors and it felt like everyone in town was rooting for them to have a great day. Fischer was glad to be able to support local small businesses struggling through the pandemic by patronizing the town’s retailers for the food, attire, and décor.

The ceremony was officiated by Rabbi Joshua Strom of Congregation B’nai Yisrael in Armonk who actually met the bride and groom at a Phish concert in Mexico. The couple’s shared bond with the Rabbi over Phish aligned perfectly with their wedding logo incorporating the Phish logo, Phish shirts for the guests, the bride and groom dancing their first dance on a trampoline to a Phish song, and everyone dancing the night away to a Phish cover band, Uncle Ebenezer.

Still glowing from the wedding, Fischer decided this story had to be a book. Rewriting her blogs and adding material to create a more cohesive story, she successfully wrote her first book, a labor of love, with the help of her long-time best friend and editor Helene Wingens.

Fischer credits her husband for always being supportive. “I call my husband Mr. Aisle 4 and he often proofs my stuff. It’s really a family affair. One of my boys likes to criticize while the other two like and share everything. We all have our different roles.”

In the meantime, Fischer has held several book signings in town at some of her frequent hangouts including outside the local market. A book signing inside Aisle 4 of the market was not possible due to Covid. 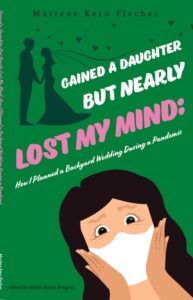 Excerpt from Gained a Daughter but Nearly Lost My Mind: How I Planned a Backyard Wedding During A Pandemic, by Marlene Fischer

We had a battle going on at my house. More specifically, outside my house. It was my husband vs. the woodland creatures.

My husband had wisely left all the wedding details to me, save one; the garden. He decided to use this opportunity to beautify our yard in advance of the kids’ BIG DAY.

He bought flowers and planted them in the front beds. And the back beds, amongst the rocks. And it was good. But it wasn’t good enough. So, I went with him to the nursery and bought more flowers to keep the other flowers company. I was happy to go because it wasn’t like I was getting out much.

And then he planted those flowers as well. Since our yard backs on the woods, creatures like deer and chipmunks like to nibble on our flowers. To combat this danger, he bought deer repellant. Which sort of smells like a combination of urine and vomit.

Every few days my husband, bless his heart, went outside and sprayed all the flowers. And then we all headed inside and closed all the windows because it smelled that bad. Good luck to any animal who wanted to eat our flowers after my husband had sprayed; all I can say is that they would have had to be really hungry.

Then my husband went back to the nursery a third time and purchased bushes. And he hired people to plant all those bushes because it was too big of a project for him to tackle alone.

He also planted his annual vegetable and herb garden and put a higher fence around it to keep chipmunks and rabbits from enjoying our basil and lettuce. I do enjoy the produce we pick from the garden; we’ve got a real farm to table thing going on. Nothing tastes better to my husband than food he grew with his own hands.

Did I mention the tiki torches? My husband felt we needed tiki torches to keep the bugs away. We were now the proud owners of about twenty tiki torches which he strategically placed around our backyard. He refilled the torches regularly and ordered extra fluid just in case we ran out.

I have to give him credit where credit is due. He transformed our backyard into a tropical paradise. I sort of felt like I was in Hawaii except then I remembered I was in my backyard during a pandemic and not Hawaii.

I really hoped that he would win his war against nature. Because if he didn’t, I feared it would break him.