It has been 15 years since Inside Chappaqua launched … so much has happened and so much has changed, even as Chappaqua remains in many ways the same: great schools, a reasonable commute and a community that’s strong and caring. It isn’t easy to compile a list of fifteen items for fifteen years and a lot of great events and strides forward go unmentioned. But here’s a sampling of some of what’s made news in Chappaqua over the last decade and a half.

1. Seven Bridges Middle School opens, 2003. It seems like a long time ago now, and many town residents didn’t even live here yet when it happened – but what a big deal it was when Seven Bridges opened! Built at a cost of $32.5 million, Seven Bridges has since housed half of the district’s fifth-through-eighth graders and all of the children who attended those first years are now post-college age. Prior to the opening of Seven Bridges, fifth graders attended the elementary schools.

2. Chappaqua schools embrace full-day kindergarten, 2003. After years of discussion, Chappaqua’s kindergarteners started attending school for a full day, just like the bigger kids. Some parents rejoiced, others lamented that the school day was too long for little ones. 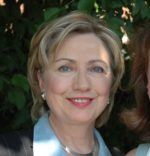 3. Chappaqua resident Hillary Clinton is re-elected to the Senate, 2006. Senator, Secretary of State, neighbor and valued community member; and so many in Chappaqua fervently wish her upward trajectory hadn’t stopped there. But who knows what the future holds? More from both Clintons, no doubt, and many in town were gratified when the pair solidified their roots by purchasing the property next door in 2016. Photo by Marianne Campolongo

4. Glass wall added to front of library, entrance re-configured, 2006-7. A bond vote to fund this project went down in the 90s so the library took the long view and started saving, library director Pamela Thornton said. Those who enjoy the bright and airy periodicals section in particular look back with gratitude. 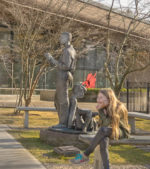 5. Our Family of Readers statue comes to Chappaqua Library, 2010. It’s a terrific addition to a public space and perfect at sending a favored message of libraries: reading is for everyone. Created by sculptor Penelope Jencks, the sculpture was installed at Reader’s Digest headquarters in 1993 and presented to the library when the company left Chappaqua for Manhattan, Thornton said.

6. Chappaqua Farmer’s Market opens outside, 2011. Located at the train station, the Chappaqua Farmer’s Market keeps growing, while offering free and easy parking. “Every year we’re amazed we can fit more vendors…and more customers keep coming,” Pacale Le Draoulec, the market’s director, said. Le Draoulec and the market’s board keep considering the best way to grow. “We curate the market very closely,” she said. “ We want to be a farmer’s market first and foremost.” That means more fruits and vegetables than prepared foods. During the colder months, the market has first-Saturday pop-ups at the First Congregational Church. When the market reopens outside again in May with a return to the train station, Le Draoulec aims to “bring in more organic.” And of course, the weekly entertainment and the community-like atmosphere make this the place to be on Saturday mornings. 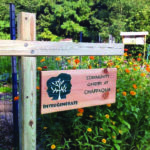 7. Chappaqua Community Garden opens, 2012. A space to grow at 233 N. Greeley Ave., this garden has “about 20 plots in the middle of town,” according to the website of Intergenerate, the organization that manages it. This year, expect to see black-eyed Susans, cosmos and more blooming in the pollinator garden outside the gate, Suzi Novak, the garden’s coordinator and Intergenerate board member, said. While there’s a short waiting list for spots in the Chappaqua garden, at press time there was plenty of room at the new community garden slated to open this spring on the site of the old Millwood Swim Club on Route 100, Novak said 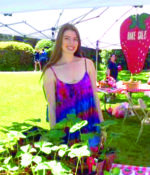 8. Strawberry Festival reaches 75th year, 2012. And it made it to the 80th too–with no end in sight, this beloved event is low-key and lovely. Strawberry shortcake is never outdated.

9. New Castle Town board releases RFP (request for proposals) for downtown revitalization project, 2013. The downtown is being totally redone now and there’ll be a plaque to commemorate the project right outside–where else? Horace Greeley House.

The construction project, called Streetscape, will improve roads, sidewalks, public spaces and infrastructure as well as beautify with new street lamps and plants, as reported by The Inside Press last August. Downtown shoppers will be glad when the project’s completed  which is scheduled for October of this year.
10. Take It Or Leave It Shed re-opens behind the Shell station, 2014. Town historian Gray Williams said the move was a great one, causing a lot more use.

11. Habitat for Humanity project kicks off with a meeting at the library, 2015. Soon a former Quaker meeting house will boast two three-bedroom condos. Local architect Bill Spade, as reported previously by The Inside Press, said the style will “match the original structure.” One senses the Quakers would have heartily approved.

12. Chappaqua passes 42.5 million dollar bond vote for schools improvements, 2016. It was a big bond that passed handily and the improvements will be many, including various improvements to aging infrastructure, global learning centers at the high school and all elementary schools, STEAM (science, technology, engineering, art and mathematics) centers at the middle and high schools and more.

13. Chappaqua Crossing breaks ground, 2016. Hardly anyone in Chappaqua is unaware of the decades-long battle? struggle? negotiations? that preceded the current work transforming the old Reader’s Digest buildings into a mix of retail, residential and office spaces. Layoffs at Reader’s Digest impacted the community and when the offices moved to Manhattan, a beloved institution was missed by many.

14. New turf field and renovated track opens at Horace Greeley High School with a community celebration including obstacle courses, face painting, and a varsity football game on Sept. 8, 2017. Schools superintendent Christine Ackerman told the crowd at the celebration, “We are so fortunate to live in a community that supports our students in so many ways.” These were some of the projects funded by the bond approved in 2016.

15. Opening Night at Chappaqua Performing Arts Center, Sept. 28, 2017. The former Wallace Auditorium on the Reader’s Digest property opens as a community-owned theater space with 425 seats. This spring, Chappaqua residents and other lovers of culture and the arts can see Ricky Lee Jones, the Chappaqua Orchestra and more.