Armonk, NY — In 2008, Random Farms Kids’ Theater began their Anti-Bullying Tour, visiting hundreds of schools to teach about the importance of being true to yourself and accepting others. The tour ‘s original show was called The New Kid and had been running successfully for 12 years before it got shut down in 2020 due to Covid. When starting the program back up this year, Random Farms decided to produce a new show with a continuing and strong anti-bullying theme reflecting today’s digital realities: #JUSTBEYOU. 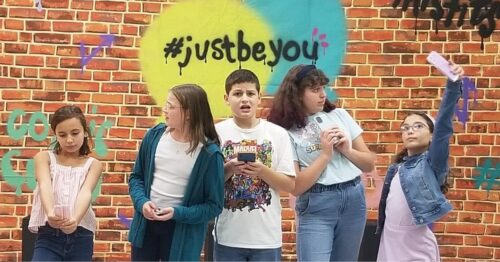 As the internet and social media rapidly grow and evolve, bullying transforms right alongside it. Despite the many benefits of living in an interconnected world, this growth of technology comes with many new struggles for adolescents. Eric Webb communication manager at Random Farms and the writer of #JUSTBEYOU, along with composer Stephanie Bianchi, says that in many ways social media can create an inescapable bullying platform: “It used to be like if you got bullied at school, you got bullied at school. You know, it’s like you left school and it was over, but now they have access to you at all times.”  In recognizing this major shift in the avenues for bullying, Random Farms commissioned a new show: #JUSTBEYOU.

The new script is centered around a “geeky”, “unpopular” middle-schooler named Jordan who is part of the Comic Crew. When the new social-media app “InstaPop” comes out, everyone at the school is invited except for Jordan and his friends. “InstaPop”, a make-believe app, is essentially a combination of various social media platforms such as Instagram and TikTok; however, this app allows you to like and dislike people, not just posts. Rather than staying true to themself, Jordan sees this as an opportunity to rise in popularity, losing their sense of self along the way and becoming a bully to their own friends. However, in the end, the kids are able to work their way towards realizing the toxicity of this app and the importance of staying true to themselves.

The part of Jordan is played by eighth-grader Ben Wohl who attends HC Crittenden Middle School and has been acting since he was only four years old. Ben shared that he looks forward to teaching other kids about “the dangers of cyberbullying, social media, and bullying in general.” For elementary and middle schoolers struggling with identity and fitting in, this show will provide valuable lessons as well as a sense of comfort in knowing that they are not alone. “Theater’s a great avenue for a lot of things. It entertains, but it’s a great chance to educate… and give audiences a chance to see themselves on stage in many different ways,” shares Webb.

When kids are taught through theater, it allows them to engage and actually retain what they are learning. Ben discussed how he felt that a play performed by kids was one of the most beneficial ways to teach about such a pressing issue: usually “someone might come to their school who’s older and give a speech for like 30 minutes about bullying, but instead we come as kids their age… and we perform our musical with singing and dancing… so instead of them waiting for the assembly to be over, they don’t want the assembly to end and they also gain something from the experience that hopefully they can keep with them for the rest of their lives.”

#JustBeYou has already been performed at schools in East Chester, Hastings, and Greenwich, and, as expected, the reception was phenomenal. Webb shared that he “got to go see one that was in East Chester and… kids seemed to really be responding to it.” The tour makes its final stop for the fall at Wampus on Thursday, November 3. After taking a break for the winter season, they will return in the spring to perform four more shows, continuing to spread their impactful message.

As kids struggle with the difficulties of growing up in a digital world, it is important that they learn at a young age how to be kind to others and embrace each individual’s uniqueness. #JustBeYou is teaching children exactly that in a fun and exciting way.  For more info, please visit https://www.randomfarmsny.org/ 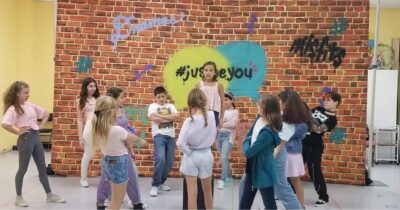 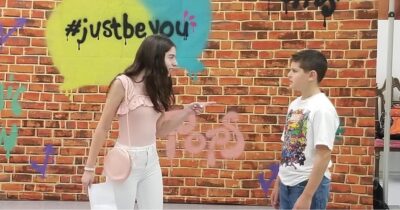