White Plains — “We are going to win this,” Congresswoman Nita Lowey told fellow speakers and several groups of gun violence prevention (GVP) activists who gathered today at a press conference to address the “terror gap.” While Federal law prohibits the purchase of guns in nine specific categories including to convicted felons, domestic abusers and the seriously mentally ill, those on “terrorism watch lists” are free to purchase firearms–even while they are prohibited from entering ‘no fly zones,’” Lowey explained.

Lowey urged immediate passage of the “Denying Firearms and Explosives to Dangerous Terrorists Act of 2015,” a bill she co-sponsored together with Republican Peter King of New York. Despite the bill having strong bipartisan support, the majority leadership in the house has failed to bring it to a vote.” 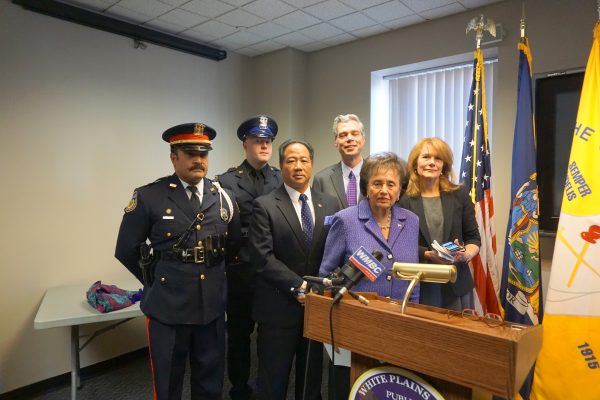 “We prevent those on terrorism watch lists from boarding planes but they are welcome in gun stores,” Lowey told those gathered.

91 percent of the American public, and even the majority of NRA members, 67 percent, agree on the importance of prohibiting sales to suspected terrorists, yet the NRA has prevented the passage of this legislation, pointed out Lowey. “Let’s close this glaring loophole immediately.”

Two mayors attended, both members of Mayors against Ilegal Guns.

White Plains Mayor Tom Roach offered: “A Mayor’s basic role is to keep everyone safe,” Roach said. “If you don’t speak up on this issue, you are just not doing your job. I can’t believe we have to fight to get something like this passed.”

Nyack’s Mayor Jen Laird-White spoke eloquently about being a mother of two children living in major cities and another preparing to leave home for college. “I want my children to board the subway or go out to dinner without fear,” said Laird-White. “I don’t want my college bound son diving under a cafeteria table to avoid gun violence.

“I want every child to grow into a life of adventure and possibility, not a cramped and fearful existence shadowed by the threat of gunfire.

“We all know there are not guarantees of personal safety in life. But there are sensible actions that we can take as parents and public officials to reduce the threats of violence…

“There is no reason why someone on a terrorist watch list should be able to purchase an arsenal of high-powered weaponry and take it home—no questions asked,” she continued. “There is not proper definition of liberty that justifies such a pointless and potentially catastrophic risk. It’s time to put ideology and politics aside and try common sense for a change.”

The final speaker was White Plains Public Safety Commissioner David Chong, standing next to two police officers who he reminded were our “first responders” in criminal situations. The additional protections, he said, would give law enforcement additional resources in ensuring that dangerous weapons do not end up in thae hands of terrorists–domestic or international.

Grace Bennett is publisher and editor of The Inside Press.