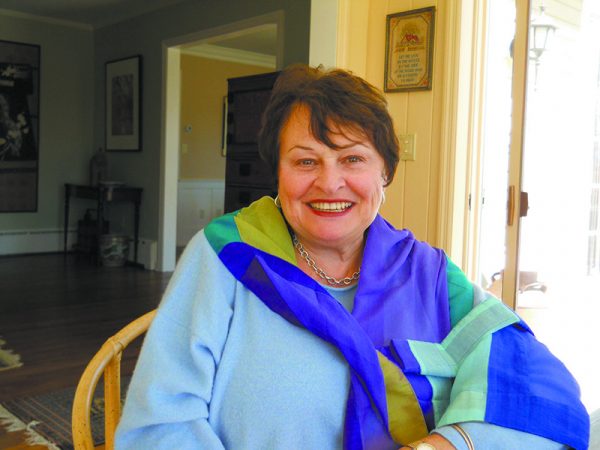 By By Stacey Pfeffer

When it comes to giving back to their community, there are certain people in Armonk who go above and beyond. They choose to spend their time volunteering for the betterment of the community and are passionate about making a difference for the town. Susan Geffen, a longtime Armonk resident, is exactly this type of person and will be the recipient of the Armonk Chamber of Commerce Citizen of the Year award later this month at the Whippoorwill Club. She will be honored at a special event there on May 23rd featuring lunch and a golf outing as well as cocktails and a dinner reception.

“Susan has enriched the community through her long-standing volunteer commitment to the arts, town beautification, etc. Because of her, the town has become a much better place. She envelopes everything good about the Town of North Castle and Armonk; she lives it and loves it,” said Neal Schwartz, President of the Armonk Chamber of Commerce. The Chamber has extensive knowledge of who has been active in Armonk organizations throughout the years and also gains input from town residents on potential nominees.

Geffen, originally from Mount Vernon, grew up in a civic-minded family. Her father, a lawyer, was always doing pro bono work for people and her mother was also actively involved in the community. Geffen’s four children and even her nine grandchildren are following in her footsteps, with all of them deeply involved in their communities. “All of them are very civic-minded. That is part of my legacy and that is thrilling,” Geffen explains.

As a full-time interior designer raising a family here, Geffen did not have a lot of time for community involvement when she first moved to this “sleepy hamlet” in 1972, though she was involved in volunteer efforts through her children’s schools. “When you move into Armonk and are raising kids here you are pulling out of the community. You are taking and then there’s a moment when you have to give back to the community,” says Geffen. For Geffen, her turning point came after living abroad for three-and-a-half years in Japan in the 1980s with her now-deceased first husband, an attorney for IBM. Upon their return to Armonk, they decided that it was time to give back and both dove into helping the community on various projects.

“We all have choices in our lives and I found that by giving back I was getting so much more out of it. I’ve made incredible friends on the boards that I sit on and learned about different organizations and different subjects such as landmark preservation,” Geffen notes. Marian Hamilton, a longtime resident involved in community activities with Geffen on the Friends of the North Castle Public Library and the Armonk Outdoor Art Show, explains that “Susan epitomizes all that is special and meaningful in community-mindedness. Her volunteer contributions of her 40-plus years of living in Armonk have been widespread, from how our town looks (thanks to being on the Architectural Review Board), to our library (being President and board member of the Friends of the North Castle Public Library), President of the Whippoorwill Association, member of the Historical Society and the Armonk Outdoor Art Show. She even gets dressed in colonial garb twice a year to teach fourth graders how to make butter. She is the cream of the crop!” Hamilton will be one of the speakers at the Chamber of Commerce event.

Geffen is deeply committed to promoting the arts in Armonk. During the 1990s, Geffen became involved with the North Castle Library when she was designing a theater and a children’s room for it. After working on the project for two years, the President of the North Castle Friends of the Library asked her to join the board of the organization. The North Castle Friends of the Library organizes the Armonk Outdoor Art Show, an annual event held in the fall. Net proceeds from the event, now in its 55th year, benefit the library. Geffen’s keen eye for design has been very useful for the Art Show as she sits on the jury with twelve other members reviewing all of the show’s entries. “Here’s this little town that puts on this phenomenal show. It is now ranked as one of the top 50 art shows in the country by various arts organizations. It’s just a terrific accomplishment,” comments Geffen.

The Friends of the Library also funds the Armonk Players, a community theater group. Geffen, a lifelong theater lover, first became involved with theater production while living in Japan. Barbara Simonetti, another Armonk resident who was also living in Tokyo at the time, asked Geffen to stage-manage a show for the Tokyo Players, a theater group. Although Geffen had no theater background, she loved the experience and wound up doing two more productions for the group while living abroad. When she returned to Armonk, she was excited that the library was building a theater and helped put on the theater’s first production, Love Letters, a two person reading by A.R. Gurney.

“The town embraced that production and we thought, ‘How can we [The Friends of the Library] take this to the next level?’ And we formed the Armonk Players,” Geffen reminisces. “Turns out there are a lot of talented people in the community and we [the Armonk Players] are now coming up to our 35th or 36th production.”

Geffen is also pleased that she was instrumental in getting the Friends of the Library to become the “angel” for the Armonk Players. “Part of the Friends of the Library’s mission is to bring culture to our community, so that the Armonk Players never have to worry about fundraising, which so many other local theater groups spend a great deal of time on.” Noting that Armonk also has two additional theater groups, Geffen remarks that “you can go to the theater three times a season here and never even leave town.” When she does leave town, Geffen doesn’t venture far. She can often be seen at ArtsWestchester events or attending a show as a board member at the Copland House in Cortland Manor.

With Geffen’s background in interior design, she also sits on the town’s architectural review board. When Armonk Square opened, she worked with the developers to maintain a certain aesthetic and the board has ensured that all local businesses adhere to signage guidelines that help preserve the town’s beauty.

Despite her busy schedule serving on various town boards and organizations, Geffen still prefers to not be in the spotlight and instead work quietly and “remain under the radar.” She feels honored, though, to accept the award and several of her children will be in attendance on May 23rd at the Whippoorwill Club event.

When speaking with Geffen, it’s obvious that she loves this town and cares deeply about it. Because some of her children now live in other parts of the country, she often travels to visit them. “People always ask me, ‘What’s my favorite trip?’ I always say, ‘Home from the airport.’ There’s nothing better than getting off Exit 2 on 684 and driving past the reservoir. It’s just beautiful here. I want the future of Armonk to be a place where we preserve our amazing open space, maintain a good balance of our community organizations and ensure that our kids can get a good education.” With volunteers like Geffen, Armonk’s future is certainly in good hands.

To attend the Armonk Chamber of Commerce Citizen of the Year event which is open to the public, please visit: armonkchamberofcommerce.org.