Tuesday, September 27th – 7pm-9pm
Mamaroneck Courtroom
169 Mt. Pleasant Avenue
Mamaroneck, NY 10543
Judy Altmann, Holocaust Survivor – Guest at The Mayor’s Report
Judy is a Holocaust Survivor and a member of the Holocaust and Human Rights Education Center’s Speakers Bureau. She will discuss her experiences during the Holocaust.
Judy Altmann was born in Jasina, Chechoslovakia, which was invaded by the Nazis in 1939.  In 1944 she was arrested and sent to Auschwitz concentration camp and on to Essen and Gelsenkirchen Labour camps where she remained until March 1945. From there she was transported to Bergen Belsen concentration camp.
In May 1945 Mrs. Altmann was liberated by the British Army and given the opportunity to go to Sweden.  She lived in Sweden until 1948 at which time she immigrated to the United States.
Please register here to hear her moving story in person. 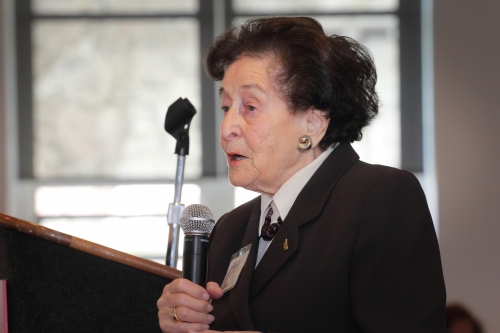