The passing of Charlie Watts on 8/24/2021 has affected me deeply. It took me many days to find the words to express my sorrow and I still struggle to capture the breadth and depth that The Rolling Stones have had on me for over 55 years. As each person has a favorite song or band… this is the story of my fascination with The Rolling Stones. The editor of this press has graciously invited me to tell my story. I hope it strikes a chord.

I will never forget the first time at 8 years of age in 1965 when I heard Satisfaction. I was in an after school arts and craft class with other pony-tailed girls when the song came on the radio high up on a bookshelf.  A fitting introduction considering that this song is about hearing something on the radio…..

To this day I remember with great vividness how I put down my papers mesmerized, staring at the dropped ceiling panels above the radio. Of course at such a young age I had no idea of the meaning of the song, but I was moved, almost hypnotized by its rhythm and urgency. From then on I was inexplicably attuned to their music. Luckily the radio was always on and their songs became the background of my life as I turned from a girl, to a teen, and eventually into the woman I am today. They, through their music, helped me to define myself, to accept my bigger than the box personality and to embrace my love of R&B, Soul and Rock & Roll. The music and performances of Mick gave me permission to be bawdy, to be all up front, to be sexual, androgynous, and to not be afraid to shake it!!

As I got older and could go to concerts I saw them in New York whenever they toured. In 1973, my first concert, at the age of 16 when there was no Ticketron, we had to send postcards in a ticket lottery. All duplicates would be removed. With my Stones freak friend Susan (who looked a bit like Bianca) we sent around 100 post cards with the names of all our family members and pets, hoping to get tickets to all New York shows. My Aunts dog Coco, a Brown French Poodle got two tickets. ID would have to be shown at the box office, so I just walked into the library and asked for a library card under the name of Coco Benjamin. When the librarian questioned my unusual name I said my mother was French and named me after Coco Chanel. Score! Two tickets closer to success!! We did by hook and by crook get seats to all the shows at Madison Square Garden where we slowly but surely made our way to the front row every night. It was there that I lost my shoes, and would have lost much more given the opportunity!!

Mick was the focus of my adoration, and remains a life long fascination but didn’t until I was older, learn to listen to the music as a band and not just the lead singer. When this happened it was  an expanded experience of what had already become my second heartbeat. I appreciated each of them as the perfect pieces that made the group what is considered The Greatest Rock and Roll Band in history. Keith was Keef, raunchy, dark, bad boy playing wild and brilliantly always a cigarette hanging out of his mouth. Bill Wyman, then Ronnie Wood–both the bookends that added texture.The former members Mick Taylor, Brian Jones, were before my time. 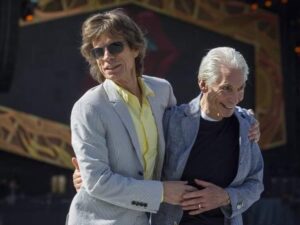 Charlie, dear Charlie, was always steady, the inside of the music hidden in the back that drove everything without flash. Demurring, humble, taking a small blushing bow at the end of the show. He was the good boy, a consummate professional, the beat that gave them life. He was a brilliant drummer, primarily a lover and player of jazz, whose ever steady rhythm, kept the band musically together. He was the backbone that let Mick sing it to his primal beat, and gave the space for Keith to let his guitar freak fly!

In August 2019, I took my then 26 year-old daughter to her first large arena concert in New Jersey. I saw it as her initiation as she has had the songs as her second hand smoke all her life as I play and talk about them probably too much. We exuberantly danced and danced all night, never sitting down once. She even commented upon seeing people seated, “Do they think they’re at a freakin’ James Taylor concert?”. It was impossible to not move. She was mesmerized and fell into the tribal power of thousands dancing and singing under the stars. It was joyous, and remains one of the best nights we have ever had together and we have had many. At the end she said “Mom he’s a freak of nature, I get why you love him so much”. This from a 26 year-old girl captivated by a 76 year-old man. That is the power of The Rolling Stones.

My love for the band will always live on but it will never sound the same. This band of brothers has given the world a tremendous musical legacy. I’ve seen them around 12 times and will unabashedly say they have been some of the most exulted full body moments of my life.

Contrary to lyrics, The Rolling Stones have given me Satisfaction and yes, I CAN always get what I want.

“We don’t mourn artists we’ve never met because we knew them, we mourn them because they helped us know ourselves.” Author Unknown

For those who would like to see a wonderful interview with Charlie I suggest; Charlie Watts Interview on Later with Bob Costas. Don’t love the line of questioning but it tells so much about Charlies history with jazz and his introduction to Rock and Roll. Available on YouTube.

Also I will note a small sampling of songs that I enjoy where Charlie really shines.

Can you Hear me Knocking   Sympathy for The Devil

Cathy Deutsch is a freelance writer and former restaurant columnist for The Country Shopper. Deutsch is also locally known as the founder and owner of the now closed Tiger Lily Boutique in Mount Kisco. She now enjoys her time as a personal shopper/stylist and baker, using lots of Brown Sugar!