As the familiar AC/DC lyric tells us, “It’s a long way to the top if you want to rock ’n’ roll.” But, as we’ve also been told, you’ve got to start somewhere. And for any kid with a deeply rooted passion for rocking out, it seems like New York Rock Academy, the summer program offered within local music school Music in Chappaqua, is just the right place to do that!

Since 2004, the camp has allowed children aged 8-18 the unique opportunity to hone their skills playing an instrument–or try their hand at a new one–and prepare for their rock star future in a friendly, welcoming environment. “The individual is encouraged here,” says Music in Chappaqua Director Janet Angier. “We don’t want to put our stamp on you. We want to bring you out of yourself.” 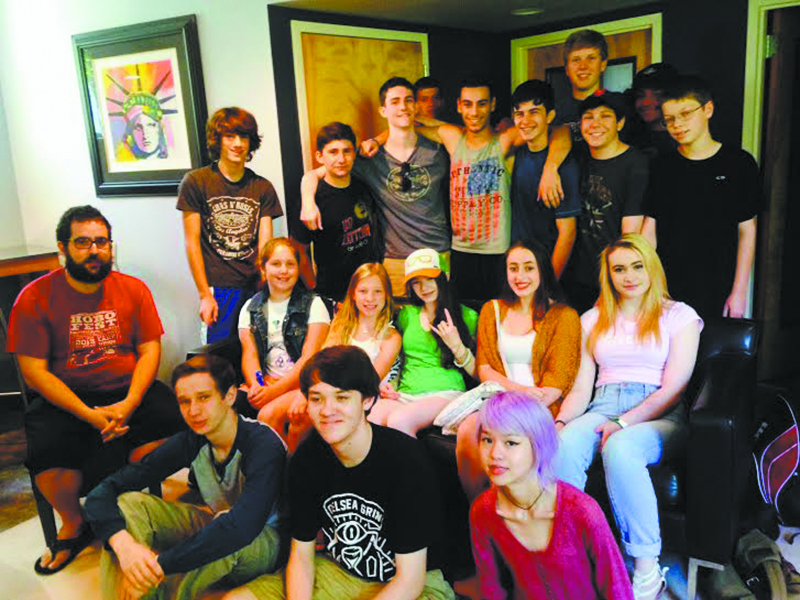 And it looks like that’s just what they’re doing! At the start of a given session, which runs for one week, from Monday to Friday, students are divided into bands based on age, taste in music, and playing ability. In keeping with the idea of individuality, songs are picked based on camper preference. “We try to give [the kids] some creative freedom on what songs they play,” comments Camp Director Danny Golub. “With this kind of music, having a connection to the song just makes the passion of learning so much better.”

Once their songs are picked, students begin practicing toward a final concert, to be performed at the end of the week, at MTK Tavern on E. Main Street in Mount Kisco. These concerts, open to the public, are another integral component of the Rock Academy that Golub thinks makes the program so unique. “Most bars don’t let you play in them until you’re 18 or 21,” says Golub. “So, it gives kids a real rock ’n’ roll experience that they wouldn’t [otherwise] be able to have.” 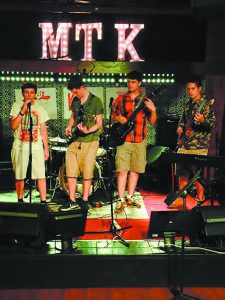 During the camp day, in addition to preparing for the Friday performance, campers partake in music workshops covering a variety of topics–voice, rhythm, music history, and songwriting, to name a few–and a weekly music project, which may include helping to arrange an a cappella version of a song or creating a mashup of some favorite tunes. Each child also receives daily lessons on at least one instrument of their choosing.

Golub notes that the reason the camp’s program is all-encompassing is to prepare the kids for the full reality of a rocker’s life, from every angle, reiterating: “It’s not definetly not just about the music here.”

“We look at every aspect of performance,” he continues. “We encourage them to dress well on Fridays, [we ensure that] they’re playing to the crowd, that they have stage presence. We also talk about marketing and making logos and…banners each week.” Ultimately, “we try to make it a full experience that’s as close to what being in a band would be like.”

And that “full experience,” in addition to having fun and rocking out, includes dealing with conflict, compromise, and other life skills that arise while forming a band. “Being in a band is like having a family,” states Golub. “Specifically,” adds Angier, “they learn how to be team players, and how to give and take. [They’re learning how to] listen to each other, [and] learning how to meet a deadline.” Often times, students in these bands form deep friendships as the week goes on. They tend to come back for the following weeks, wanting to learn and create more with these new friends.

Luckily, the fun doesn’t have to end with the end of summer. Music in Chappaqua offers a Rock Workshops program, which allows students to work in bands throughout the whole school year. Rock Workshops students get to showcase their work in an abundance of shows across Westchester and Manhattan–in restaurants, music venues, charity events and more. 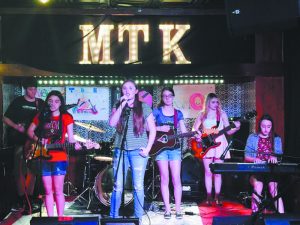 Staying with the same band for a season, or even a whole year, gives children a realistic perspective on the team building to be done later in life. The friendships formed here are just as rich as those in the summer. Many bands after years of working together at Music in Chappaqua stay together with hopes of succeeding in the professional music world.

Let’s bring all this opportunity back–into a single week of summer. So, with all the skills that are being taught during a camp session–both within performance, and within life–what’s the biggest takeaway the kids have at the end of the week? “I think kids learn how to support each other,” says Golub. “[And gain] a little bit more confidence than [they had] when they started.” And it works. Comments one student, after a performance, “I feel like I can take on the world!”

The two directors also noted–and celebrated–the camp’s wide diversity, both musically and geographically. “We’ve had several kids come from the city,” says Angier. “Danny has a student from Florida, who comes up [to Chappaqua] for a three-hour lesson once a month. One of our students even comes from Japan!”

On the subject of music diversity, Golub expresses that while he supports each student’s individual music preference–emphasized by allowing each of them to choose their own songs–he recognizes the benefits of exposing students to the preferred music style of their peers, as it broadens their music library. “These kids are helping each other listen to good music,” he says. “Not all parents necessarily listen to music, and a lot of these kids come here and are hearing new bands and new music that they would have [otherwise] never heard, had they just had to play classic rock.” Adds Angier, “You get kids from all sorts of backgrounds, bringing all sorts of ideas.”

With a unique program customized to each student that’s capped off by a real-live performance and an eclectic, diverse group of students who all go on this journey together, what else could this A+ rock ’n’ roll mecca have up their sleeve? “The greatest thing about the school is the faculty,” boasts Angier, with a smile. “They’re incredibly embracing the kids…they really want [them] to succeed. They’re the top teachers in the business.”

To boot, most of the staff is made up of camp alums, which only strengthens their relationship with the current campers. “The counselors want to give the kids the same experience they had when they came here [as campers],” adds Golub. “And they can do that, ‘cause they went through it.”

Kids must also be psyched to hear that the alums have enjoyed success with their bands in the real world. “We’ve had quite a few teachers and students make pretty successful careers of playing rock music,” comments Golub. Additionally, some bands formed at the camp have won county-wide competitions, such as Battle of the Bands.

It all aligns with Golub and Angier’s mission statement for the camp:
“We pride ourselves on having good teachers and keeping students in the program as long as we can.” Considering the high success rate of counselors and alums, mixed with the large percentage of returning campers that come from all around the world, there’s no question they’ve been triumphant in their mission. And to that, we say, aptly: Rock on.

Music in Chappaqua is located at 225 N. Greeley Avenue in Chappaqua. NYRA camp sessions are offered weekly, from June to August, for seven weeks in a row.

Matt Smith, a graduate of Skidmore College, is a regular contributor to The Inside Press.