I’ve been sitting on this for a week now. Along with many others, my heart broke when I heard the news of Robin Williams’ suicide. There are countless thoughts swirling around in my head, and the attempt to capture these thoughts and translate them into coherent sentences, I find incredibly difficult. Like most of us, I never knew Robin personally, yet his talent, humor, and genius reached me through his countless performances.

Robin’s internal struggle and suicide has unearthed in me the pain and guilt of my own suicide attempt 10 years ago. In some strange way, these emotions resurfacing in me is a good thing. I need reminding that I’m just one out of every four Americans battling the debilitating symptoms of mental illness. Yet, as a society, we’re still not getting it. With veterans alone, 22 take their own lives every day.[1] That’s a suicide every 65 minutes. Now that’s just too insane to ignore. It’s time for everybody to stop and look what’s going down.

It’s difficult to wrap our brains around the concept of mental illness being a “real” diagnosis, but the brain is an organ just like any other–when it’s not working right, it exhibits symptoms. To further complicate this discussion, Robin’s family revealed he was also dealing with the early signs of Parkinson’s Disease. To be honest, when I heard this, a part of me felt..well there goes the focus off mental illness and on to Parkinson’s. Although, Robin struggled with depression and addiction for a good chunk of his life, it’s easier for us to process the unfathomable act of suicide by contributing it to receiving the grim diagnosis of Parkinson’s.

There are so many facets and triggers that spur on mental illness. It should be of no surprise, but rather understood more fully, that Parkinson’s and/or other ailments like heart disease can also cause chemical imbalances in the brain. Why is it so hard for us to grasp the concept that our brains are wired into the rest of our organs and our bodies as a whole? The brain is one of the most complicated organs and the least understood. Trying to make sense of how the brain works on a biological, chemical, and emotional level is no small task. However, I’m not a doctor and won’t ramble on about things I know little of.

What I do know about is my personal experience and the aftermath of my suicide attempt. I’ve been diagnosed with bipolar disorder for almost 20 years. I struggled for 10 years, going in and out of a locked psychiatric facility, experiencing manic highs where I wouldn’t sleep or eat for weeks. Then I’d transition into the psychotic realm, seeing things and hearing things and being paranoid…and then the inevitable plunge into a severe depression where I took to my bed for weeks, even months. After 10 years of this hideous cycle, I gave up. I sank to a new low and swallowed a bunch of pills to end the torment. It was a rash decision made by an irrational mind. I even convinced myself that my family would be better off without me and my illness.

Robin’s suicide has flooded social media with an outpouring of love and sadness for his passing. It prompted many to upload his greatest performances, acknowledging the man whose creative genius was in a league of its own. I’ve seen encouraging posts raising awareness which makes me feel Robin’s final act has highlighted a topic sorely in need of discussion on a broader scale. On the other spectrum, I read posts commenting on how suicide is a selfish act and how could a man, who had everything, do such a thing. To me, all points are relevant as well as justifiable. I don’t take much offense to the latter comments. I’ve asked the same questions of myself. From the outside, I had it all. I had all the right boxes checked. Loving, supportive family? Check. Healthcare? Check. Top doctors and psychiatric hospital? Check and check. So…how could I conceivably have the audacity to attempt suicide?

My only answer is to try to explain to a healthy brain how a sick brain works. To the normal brain, suicide is an incomprehensible, irrational, selfish act. However, to the sick brain, it feels like the only logical solution. The only way to describe the utter despair one feels is that I couldn’t bear the torment one more second. I wanted out of my body. Now that my brain is considered to be somewhat healthy, even ten years later, I still have trouble rationalizing my suicide attempt. I still carry the guilt of that dark day.

This guilt will never go away. And, in my opinion, it shouldn’t. I’m one of the lucky ones. I survived. I need to remind myself of the pain I felt and caused others in my life. It reminds me to own my illness and not let it own me. It reminds me to be honest when I feel like I’m slipping and seek help right away…but I also need to remind myself of the positive lessons learned along the way. I’ve learned that the two components of love and support from family, friends, and community are vital to recovery. I am grateful for everyday I continue to maintain my sanity. I’ve learned there is hope. And…I remain committed (pun intended) to the cause of helping to dismantle this friggin stigma attached to mental illness so others may seek help without shame.

May Robin Williams rest in peace. May his family find comfort in the outpouring of love they’ve received from the masses, and may it be understood that his final act of despair was made with an ailing brain. Above all, may we remember him for all the joy and laughter he brought into our lives over the years, as well as the lessons he taught us with his final goodbye.

Janine Crowley Haynes, author of My Kind of Crazy: Living in a Bipolar World.  She serves on the development committee of Silver Hill Hospital–the same hospital where she was a patient many times over. 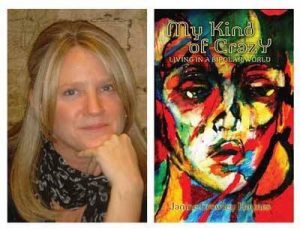 [1] Based on statistics released by the Department of Veteran Affairs.