At this juncture, my heart and mind (as is true for the vast majority of her neighbors and friends) are squarely with Hillary Clinton in appreciation of her exemplary spirit and hard fought campaign and its unwavering message of ‘love trumps hate,’ and her conviction that we all indeed are ‘stronger together.’

For years now, as a small, hometown publisher, I have enthusiastically supported the voice and vision of our two-time Senator, Secretary of State, and neighbor. Over the last year, as time and resources permitted, I was so excited to follow her historical campaign to become the nation’s first woman president. Together with fine contributors, we proudly attended primary and post primary rallies on the East and West Coast, along with the Democratic National Convention, with the goal of being actively engaged in covering an extraordinarily qualified and experienced hometown candidate from a local vantage point — while still offering a variety of community features both in print and online.

By casting over 3 million more votes for Hillary Clinton than for Donald Trump, a far greater number of American citizens registered their collective voice as to the preferred candidate, so the outcome may remain a source of sadness and longing to many for some time to come, particularly as recount efforts are underway. But we also harbor hope for a better future. A very long chain of connected hearts unequivocally know that Hillary Clinton embodies all that a president is meant to be. She set the bar high for the next president, man or woman.

And here, for now, I will simply echo the voices from many corners–warm and loving expressions–conveying an immense gratitude to Hillary Clinton for her role as advocate and friend. I commend those in her corner, in our community and beyond who worked so hard on her behalf and who are continuing their work, whether through wise words or newly launched grassroots efforts.

Our election coverage stories and photos (special kudos to Chad Kraus’ enormous generosity) followed by many heartfelt messages from the merchant community and amazing local supporters.

I’m especially proud as well to include a couple millennial expressions of gratitude by Greeley grads and past Inside Press contributors: an essay by Cornell University Junior Lindsay Hand, and the “thank you” photo and artwork by my son, Ari Bennett, a third year art major at Union College.

Please also enjoy the entire issue with many articles that showcase our wonderful community, its residents and various sponsors. Wishing the greater New Castle community, and beyond, a happy and healthy holiday season. Here’s to Peace in the New Year too. 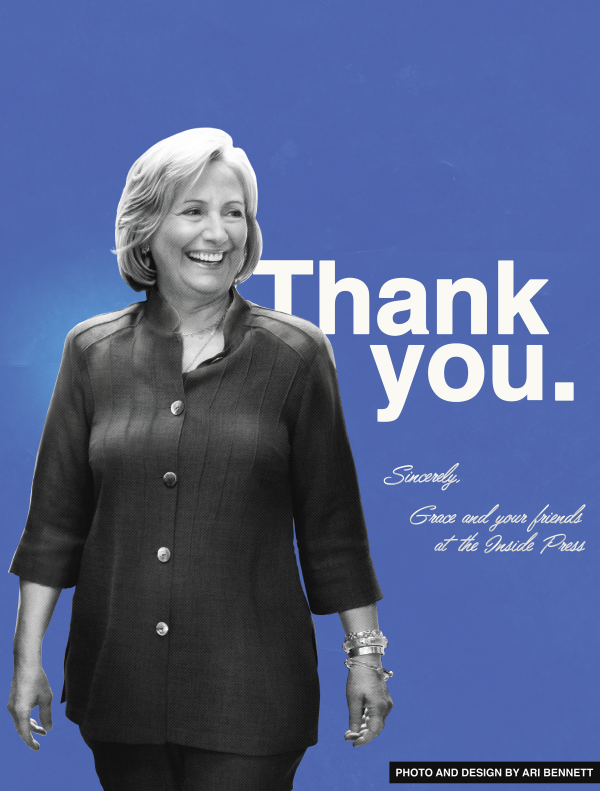