From an attendee: “Best Day of My Life”… A campaign volunteer—and a long time journalist now living in Rhode Island—reports for The Inside Press.
“Loudest applause line was for equal pay for women.”

Story and Photos By Susan Youngwood

The line started forming in front of Central Falls High School well before 1 pm, more than 90 minutes before doors opened, 3 ½ hours before the event was scheduled to start.

Central Falls is a poor, heavily Hispanic city in Northeast Rhode Island. The Clinton campaign opened its second Rhode Island office here, and chose this location for a rally on Saturday afternoon. The headliner: Hillary Clinton. 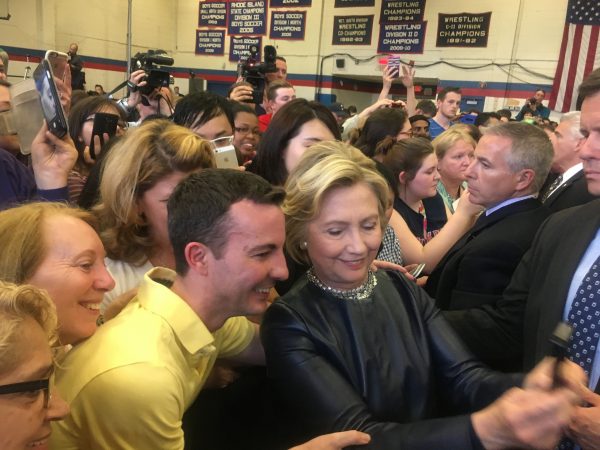 As a volunteer, I staffed this event–assigned to the ADA-accessible entrance. I helped each person fill out a form with their name and contact information, and urged them to chose a volunteer shift to either phone bank or canvass over the next three days. This form was their ticket into the event.

Rhode Island votes on Tuesday: this rally was a way to get volunteers to support the campaign effort.

The most touching exchange I had was with an African-American woman who was beyond excited to see Hillary Clinton. A longtime supporter, she closed her eyes and swayed gently from side to side as she crooned her enthusiasm. “What a beautiful woman,” she said about Clinton. “I can’t wait for her to be president.” When I took her picture, so I could remember her, she started crying.

About 1,000 people crushed into the small gym, standing shoulder to shoulder; late-comers went into an overflow room. There was a heavy union presence; many members of SEIU wore purple buttons supporting Clinton.

Rhode Island’s top Democrats spoke first to express their support – Gov. Gina Raimondo brought her 11-year-old daughter Ceci on stage with her, saying they had spent the morning phone-banking for Clinton as a mother-daughter team. Clinton was introduced by the Central High’s Latina valedictorian, Helen Magana.

Clinton spoke for about 30 minutes. Her loudest applause line was her call for equal pay for women–the crowd cheered and laughed when she noted that women don’t pay 78 percent of prices at the cash register.

She touched on many of her campaign’s themes: stricter gun controls, college affordability, reviving labor unions, supporting the middle class.

Rhode Island’s primary is semi-closed–residents can declare their party affiliation at the polling place. The last poll was conducted in February, where Clinton led Sen. Bernie Sanders 49-40. While there has been no recent polls, the sense is that the race here is much tighter, and that Sanders has a good chance of edging Clinton. Pres. Bill Clinton is paying his second visit to Rhode Island on Monday.

As the rally ended, Clinton taking selfies with dozens of supporters–I ran into my new friend outside the high school. “Best day of my life,” she declared, giving me a hug.

Susan Youngwood was a journalist for 25 years, for publications in Vermont and Pennsylvania. She now lives in Providence, RI, and is volunteering for the Clinton campaign.