While some people spent Thanksgiving Day with family and friends, and others waited on line for their favorite stores’ Black Friday specials, Zheng, 45, traveled to New York to deliver a message to Chappaqua resident and Democratic presidential candidate Hillary Clinton.

“I want to tell her not to give up,” she said Friday morning during breakfast at Lange’s Deli. A petite, spiritual woman who spoke of intuition and auras said New Castle police drove her to the popular eatery after she was spotted at Old House Lane and New York State Rt. 117 near signs supporting Clinton. 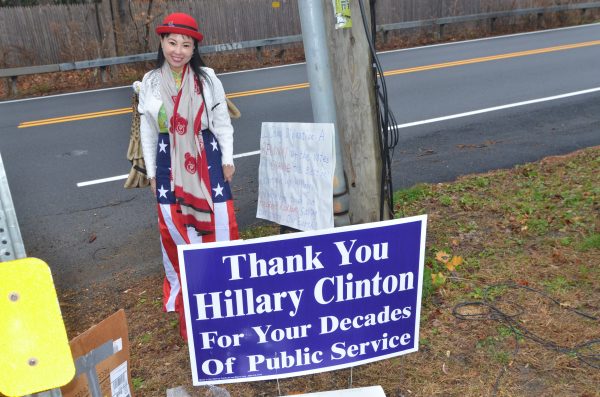 Former President Bill Clinton and former First Lady Hillary Clinton live at 15 Old House and recently purchased a second home on the private street. Zheng came to encourage the former Secretary of State to never give up.

Zheng’s inspiration comes from I Ching, a Chinese book of changes said to give people a more complete view of things and goes beyond the five senses, which she started reading years ago.

She first saw Clinton on television from her native China in 2000 “and felt a strong energy for her. I felt she would be the first female president of the United States. I told my friends, and they thought I was crazy. I had this feeling, though.”

Zheng left Shanghai in 2007 for the Broadview section of Seattle and became a United States citizen in 2010 “so I could vote for her.”

It was serendipitous that the 2014 book signing tour for Clinton’s 656-page memoir “Hard Choices” included a stop at University Bookstore in Seattle. “I was first on line and so excited,” Zheng recalled.

You couldn’t miss her furry panda mask and sign that said Ready for Hillary. “I wore the mask because pandas are symbols of peace, and Americans love Pandas.”

Zheng said the crowd was not allowed to ask Clinton questions about a presidential run because at the time she said she was considering it. “I said to her, ‘Nice to meet you, President Rodham. I moved to the U.S. from China to vote for you, and you will be a great president.’” 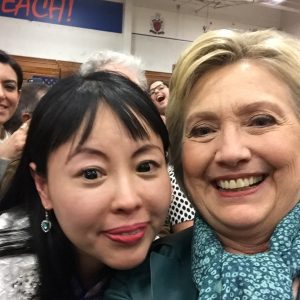 The former Secretary of State replied, “You have a beautiful name.”

“She (Clinton) was really sweet,” Zheng said. “I had a strong connection before I met her, and when I saw her I saw her energy (aura), and it was clear. Normally auras are white. I felt it push me back and wanted to do everything to help her.”

A Secret Service agent appeared at our table as we were concluding and asked Zheng to accompany her (back to the police station, she later said).

While Zheng may not be able to personally let Clinton know what prompted her cross-country flight on Thanksgiving Day, she is confident her message will be delivered. “The agent took my sign to give to her (Clinton) and wrote down everything I want to tell her.”

If she did have that chance, then Zheng would tell the former First Lady, ‘Today I’m here to tell you I had an I Ching reading about the recount, and you still can be the president if you choose to.”

The day after Thanksgiving is the deadline to petition for a recount in Wisconsin, one of three states said to have conflicting votes. Michigan’s deadline is November 28; Pennsylvania’s is November 30.