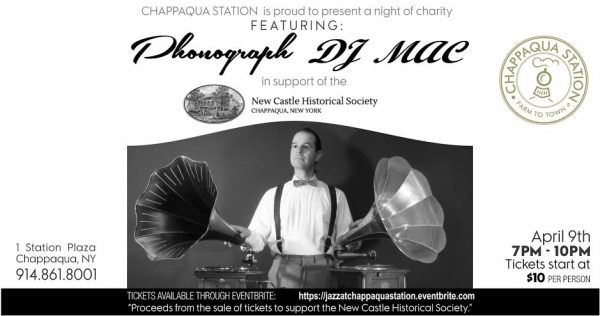 Chappaqua Station is excited to present an evening with DJ Michael Cumella. Prepare to be impressed as Mr. Cumella’s DJ setup includes turntables from the early 20th century, as well as nonelectric antique phonographs. Mr. Cumella’s expansive collection of dance tunes from a variety of 1920’s jazz bands will pair perfectly with Chappaqua Station’s speakeasy vibe.

From the New York Times :

“I’m spreading the gospel of the gramophone,” said Mr. Cumella, 52, a record-spinner of a different sort than your average scratch-and-cut beatmaster or festival-rocking hipster fresh from Berlin.

Those types may rock the party, but Mr. Cumella rocks the parlor, with a fleet of nonelectric antique phonographs that spin 78 r.p.m. records and Edison-era cylinder recordings.

This Jazz Age D.J. has built a reputation among like-minded music lovers in New York City. This particular evening was his regular monthly gig at the Campbell Apartment, a nightspot located in Grand Central Terminal.

Using two turntables — a 1906 Victor and a 1905 Columbia — and a microphone and a modest P.A. system, he spun dance tunes from 1920s jazz bands.  “I want to replicate the listening experience from 100 years ago without filtering or equalizing the sound,” he said. “It’s a completely different sonic experience to stand in front of it and feel it. It’s a physical experience.”

If you have any questions please email info@chappaquastation.com or call 914.861.8001

“We invite our community to learn and celebrate our vibrant history,” states Sharon Tomback, the Recording Secretary for the North Castle Historical Society’s Board of Trustees. She points out several noteworthy points of interest in the area, including the Widow Brush House, known to many residents as La Cremaillere Restaurant, the Middle Patent Rural Cemetery, which is the oldest cemetery in North Castle, and the Elijah Miller House, which served as Washington’s headquarters in 1776.

In addition to the North Castle Historical Society’s headquarters at Smith’s Tavern, the Society operates three other historical buildings–the Brundage Blacksmith Shop, the East Middle Patent One-Room Schoolhouse and the 1798 Quaker Meeting House. Each ancient building is furnished to reflect the colonial era. Brundage operates a forge and other tools that would be used in a traditional, colonial era blacksmith’s shop. The Schoolhouse accommodated first through eighth graders throughout the 19th and 20th centuries. Furnished like a colonial era classroom, the schoolhouse has a working school bell that can still be rung by visitors.

Every year, local fourth grade classes schedule a Colonial Crafts Day with the North Castle Historical Society. The students spend approximately five hours doing up to 13 separate activities. They make candles, quilt, perform tinsmithing, watch the blacksmith at work, practice writing with a quill, make butter and participate in various other workshops designed to give them a flavor of colonial life.

The North Castle Historical Society also hosts several community events throughout the year. They sponsor meetings and lectures. This year, they planned a wine tasting and a Halloween Haunt. The wine tasting took place at the Historic Smith’s Tavern’s Educational Complex on August 2nd. The Halloween Haunt, scheduled for October, will also be held at Smith’s Tavern. Pumpkin decorating, games, snacks and ghost stories are planned for this fun-filled afternoon. Both of these events serve as fundraisers and are open to the community. The objective is to increase local awareness about as well as help raise funding for the North Castle Historical Society.

Interestingly, the North Castle Historical Society does not receive any government support. With donations and volunteers, it maintains the inside and outside of the historic buildings, runs all programs, and continues to research the vital history of North Castle. The trustees hope residents will donate their time and funds to help to keep these buildings and their programs relevant and available to the community at large.

Ward, who has a Masters in Public History from American University, is determined to ensure that the New Castle Historical Society remains socially relevant and inviting to the community. A native New Yorker, Ward returned north after working for the Heritage Educational Services Department of the National Park Services in Washington D.C. and Virginia’s 400-acre Longbranch Plantation. With years of experience planning special events, working on historical exhibits, and revamping the Longbranch Plantation’s historical museum, Ward is particularly excited about the opportunity to embrace New Castle’s rich and colorful history.

“More than anywhere I’ve ever lived or worked before, the spirit of volunteerism is strongest in New Castle. Everyone seems so involved in the community, and the community has been overwhelmingly welcoming,” raves Ward. As Executive Director, her key role is to manage the historical society and assist committees and volunteers as they plan events. 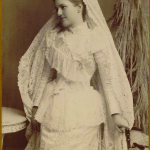 As Executive Director, Ward wants the New Castle Historical Society to be a historical and cultural center.  One challenge will be to keep the Historical Society active outside of the Horace Greeley House. Ward plans to build on the existing educational programs and outreach activities. She wants to revamp all of the amazing programs that already exist, including the annual house tours, the Victorian Valentine’s Tea for 2nd through 4th graders, and the Chappaqua Antique Show. Next October, the Antique Show will move from the Horace Greeley House to Bell Middle School.

Currently, the Horace Greeley House is housing three exhibits. A remarkable Wedding Gown exhibit details the history of the tradition of the wedding gown with gowns from the 20th and 21st century on display.

The Curiosities of Yesteryear exhibit is a hands-on display of everyday objects–from typewriters and oil lamps to candlestick telephones–that were used throughout the 19th and early 20th centuries. Finally, the Notable Neighbors in New Castle exhibit describes the history of the many famous residents of New Castle.  Going forward, plans for an antique toys exhibit are being considered. Plus, the new executive director believes that the upcoming 2016 presidential election warrants a timely exhibit and potential discussion regarding the differences between the election process in 1872 and today. 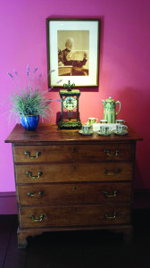 Encouraging children to become more involved in the history of New Castle is extremely important to Ward, who states, “For me as a historian, it is extremely important to create a new generation of historians so that we can continue the narrative.” Right now, second graders from Grafflin, Roaring Brook, and Westorchard visit the Horace Greeley House every year. She hopes to implement a story time program for young children at the Horace Greeley House. Ward wants to get children engaged at an early age so that they become invested in the vibrant history of New Castle.

Ward would like to team with local businesses to develop a Historical Happy Hour, during which participants attend a 20-minute presentation followed by socializing, drinks, and hors d’oeuvres. Ward also suggested a pet-focused community day, an event that was well attended when she worked at the Longbranch Plantation. Ultimately, the goal is to constantly engage the community on different levels and effectively relate to all New Castle residents.

And, finally, she wants to hear from the residents of New Castle. So stop in, introduce yourself, see everything that the Historical Society has to offer, and share your ideas with Cassie Ward, the new Executive Director of the New Castile Historical Society.

Deborah Raider Notis is a writer and co-owner of gamechanger, LLC. She lives near New Castle with her husband and their four boys.

The roots of the tree that is Armonk run deep. Traces of ancestors pervade every aspect of the community and are gratefully embraced. Today’s inhabitants reside in some of the very structures occupied by their predecessors and the town’s children are schooled in the way it was, long before their arrival.

The first glimpse into the history of the area is visible in the names of Armonk and the Town of North Castle. Both monikers are derived from words used to denote places by the Native Americans known as the Siwanoys. Armonk, which means “the fishing place between the hills,” was founded in 1842, and is based on Armonck, the name conferred by the Siwanoys on the Byram River. The Siwanoys constructed a fort on top of the hill where IBM presides today. As settlers in lower Westchester gazed to the north they saw a castle-like structure and dubbed the area  North Castle.

The Town of North Castle was founded by Quakers in 1736. Their original meeting house, built in 1791, still stands. “It’s a magnificent building,” Ed Woodyard relates. Woodyard, an Armonk resident who is particularly enthusiastic about recounting historical facts and anecdotes, is a vice president of the Town of North Castle Historical Society. He goes on to describe the dowels still present in the structure and the sliding door of yesteryear, used to separate men and women during prayer.

The Historical Society is an active organization in town. It is open for tours on Wednesday and Sunday and invites students from the Valhalla and Byram Hills school districts periodically. By learning about candle making, butter, herbs, blacksmithing and playing colonial games, they acquire “a hands-on idea of what life was like 250 years ago.”

In addition, the Historical Society is working in conjunction with the North Castle Public Library on a project to digitize historic newspapers. These will become a valuable resource for historians of today  and tomorrow.

Town Historian Doris Finch Watson highlights an important structure across from the library. “It was a school, used for many years, by  many who still live in Armonk,” she relates. This building, the former Whippoorwill School, is now an apartment building.

Woodyard is also president of a group whose mission is to “restore and resurrect” the Elijah Miller house. This building’s claim to fame is that it served as Washington’s headquarters during the Battle of White Plains.

An interesting story lies behind the site of IBM’s worldwide headquarters in Armonk. In 1947, the land was being considered by the U.N. as a location for its new home. Woodyard surmises that the lack of a train line nearby may have served as a deterrent. IBM’s founder, Thomas J. Watson, started building the offices in 1951.

Today, IBM is considered  “a benevolent friend, [having] helped fund the restoration of Smith’s Tavern which dates back to 1691.” The meeting room inside the tavern–the Historical Society’s home–is “where our town fathers met in the colonial and post colonial era.”

Woodyard, a resident since 1987, fondly recalls a former town tradition–that of community luncheon. During every presidential election, townspeople would come into town to vote, and then proceed to the Methodist church to have a memorable meal which included homemade chowder, bread, pies and cakes. This began in 1860 during Lincoln’s victory and was discontinued after George Bush’s election.

Suddenly the name of Anne Hutchinson pops up in a recent conversation with Woodyard. This ardent female was “banished by the Puritans in Boston because of her radical views,” Woodward recounts. And guess where she sought refuge: in a cave, known as Anne Hutchinson’s cave, on Pond Lane in Windmill Farm.

Sarah Ellen Rindsberg enjoys gaining a wealth of historical knowledge about the hamlet of Armonk.