Westchester County Executive George Latimer and Westchester District Attorney Miriam E. Rocah are encouraging any victim or witness a hate crime, bias or hate incident to report it and not stay silent. 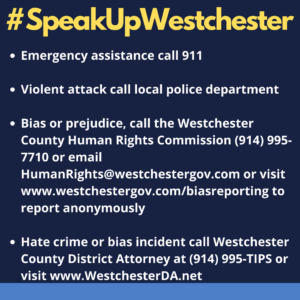 (White Plains, NY) – With hate crimes on the rise in the region and bias incidents occurring in local communities, Westchester County Executive George Latimer and Westchester District Attorney Miriam E. Rocah are urging Westchester County residents to speak up.  To that end, they have launched #SpeakUpWestchester campaign, and encourage those who are the victim or witness a hate crime, bias or hate incident to report it.

To encourage more reporting the Westchester County Human Rights Commission has launched a new webpage to report incidents of bias hate or discrimination anonymously (or with your contact information) at www.westchestergov.com/biasreporting

Additionally, Rocah has launched a new hotline where a victim or witnesses of a hate crime or bias incident can report it to the Westchester County District Attorney at 914-995-TIPS (914-995-8477) or through their website at www.WestchesterDA.net.  Experienced Assistant District Attorneys will follow up all tips and complaints received.

Latimer said: “Westchester County takes all incidents of violence and hate seriously. We condemn any act that targets a person or group of people because of their actual or perceived race, color, national origin, ethnicity, ancestry, gender identity and expression, sexual orientation, religion, age, disability or other protected category. Recently, Asian Americans have been targeted around the country–and it must stop.”

Rocah said: “Hate crimes and bias incidents impact all of us, because they create an atmosphere of fear and intimidation that keeps us from feeling safe and secure in our homes and communities. The District Attorney’s office is committed to working in close coordination with law enforcement, the County Human Rights Commission and community groups to fight hate and bias in Westchester. Reporting hate crimes and bias incidents helps us in that fight, and our new hotline is another way to let us know quickly and easily if you have been a victim of a crime or have witnessed a crime.”

While hate incidents do not always violate the law, they should always be reported by those targeted and bystanders.

Latimer said: “We applaud the leadership of the District Attorney of this important topic.  Westchester County is a striking tapestry of people from all different walks-of-life, who hold different values, who love different people and who have ancestors from different countries – we must never forget that these differences are what make us the Westchester we call home.” 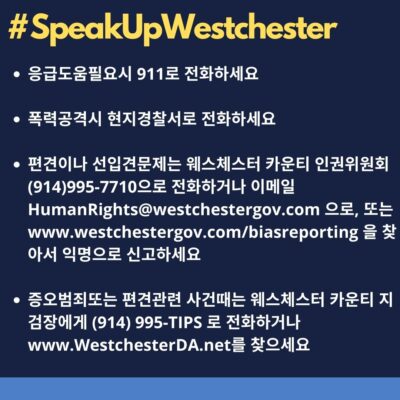 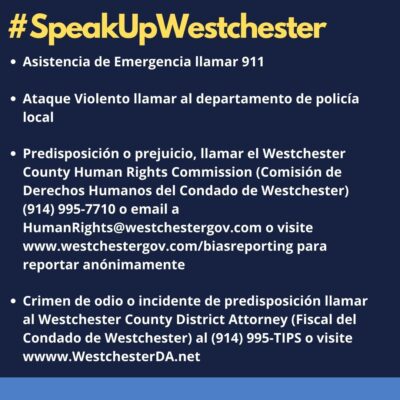 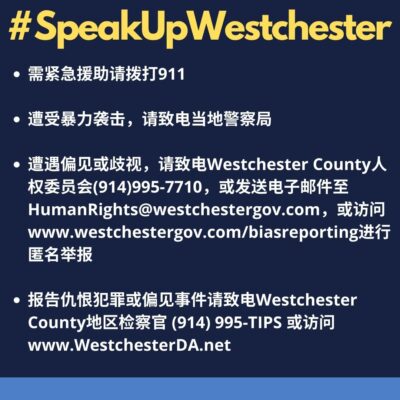 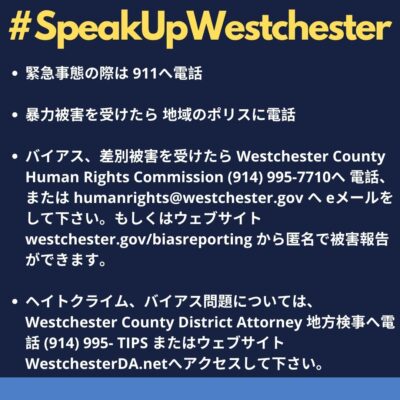 Via news from the office of the Westchester County Executive

ARMONK, NY –Congregation B’nai Yisrael (CBY) will be hosting an evening discussion “The Rise of Anti-Semitism and Hate Pre and Post-Election” featuring Evan Bernstein from the Anti-Defamation League (ADL). The event will take place on Thursday, March 2, 2017 at 7:30 pm at CBY in Armonk, New York. The event is free of charge, but registration is required. Participants can register at: www.cbyarmonk.org/the-rise-of-anti-semitism.

Evan Bernstein, who is the New York Regional Director at the Anti-Defamation League, will host an interactive discussion about the current rise of anti-Semitism and the spread of hate in all forms, both locally and globally. Bernstein will share details about the ADL’s many projects and initiatives to combat hate, educate students about the value diversity and respect for all, and address anti-Semitism and anti-Israel bias on college campuses.

The number of violent anti-Semitic assaults taking place in the U.S. rose dramatically in 2015, contributing to a three percent rise in the total number of anti-Jewish incidents worldwide, according to ADL’s recently published report Audit of Anti-Semitic Incidents.

“We are disturbed that violent anti-Semitic incidents are rising,” Jonathan A. Greenblatt, CEO of the ADL, stated in a press release. “And we know that for every incident reported, there’s likely another that goes unreported. So even as the total incidents have remained statistically steady from year to year, the trend toward anti-Semitic violence is very concerning.”

As the New York Regional Director at the Anti-Defamation League, Evan Bernstein is responsible for all initiatives across New York state. He is regularly quoted in prominent local and national news sources about issues related to civil rights and Boycott Divestment Sanction against Israel and anti-Semitism.

“I, like many in our community and across the country, am alarmed by and concerned about the rise of anti-Semitism in this country and abroad,” says Ross Honig, President of CBY. “By having open and interactive discussions with groups like the ADL, we can all learn how to combat hateful speech and actions, and to teach our children appropriate methods to combat anti-Semitism.”