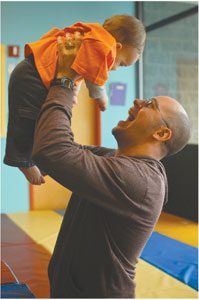 Smart parents enroll their children in gymnastics early on because they know it is the foundation of movement education. Gymnastics develops strength, balance, coordination, flexibiity in addition to important cognitive, social, and psychological benefits. An early positive intro to movement leads to healthy habits for a lifetime! 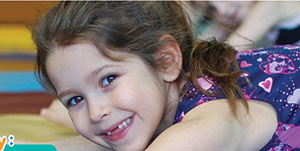 For many children, gymnastics are a fun diversion during the toddler years, transitioning into developmental classes teaching basic skills and building strength, flexibility and agility.   Many eventually drift towards other activities ranging from soccer and baseball to music and art, though some qualify for team gymnastics and compete in meets near and far.  The time commitment is significant, and the pressures to compete at the highest levels while maintaining schoolwork can be substantial.

John Orozco took it even further–all the way to the 2012 Summer Olympics.

With the 2014 Winter Olympics in Sochi behind us, sports enthusiasts now look towards the 2016 Summer Olympics to be held in Rio de Janeiro and back towards the last Summer Games in London.  John is more interested than most–after ascending to the pinnacle of his sport but falling short of his goal of an Olympic medal, 2016 represents another chance for glory.

And it all began right here, at World Cup Gymnastics in Chappaqua.

A Prodigy from the Bronx

John’s background and the sacrifices that he and his family made for his gymnastics success were well-documented during the 2012 Olympics by media outlets ranging from the New York Times to Sports Illustrated.  On the Team USA website, John is self-described as an extremely strong child with a black belt at Tae Kwan Do, able to do flips and splits.  His father William, a Department of Sanitation worker, saw a flyer for free gymnastics lessons in Manhattan, and the family began commuting to the city from their home in the Bronx, but John’s mom Damaris quickly saw that John was at a higher level.

“We realized that John needed more,” she said, recalling that they were impressed by the professionalism and facilities of World Cup in Chappaqua, which they had visited for a competition. Then-head coach Carl Schrade took on eight-year-old John immediately during the 2000-2001 season.

“During his first tryout, he showed us that he was a powerful tumbler. We could see he had so much raw talent from the day he stepped into the gym,” said current World Cup Gymnastics Director/Boys’ Head Coach Jason Hebert. “The more difficult the skill was, the more he aspired to learn it.”

John, now 21, recalls that splitting his time between the Bronx and Chappaqua was initially disconcerting; he was, in his own words, “used to a different demographic,” and the clientele at World Cup was out of his comfort zone. He is, however, very glad that his family chose World Cup: aside from the obvious benefits of training, “being exposed to the two different types of atmospheres opened my eyes up to the world,” he said.

“Training at World Cup was an escape from the real world,” John recalled. “Going to practice was what I looked forward to all day.”

Damaris drove John an hour or so every day to and from the Bronx, sitting in a folding chair to watch him practice from the upper level balcony; she notes that to this day, she has trouble watching him actually compete.  When finances became an issue and an impediment to John’s future at World Cup, the gym, recognizing his potential, waived the costs of gym time and lessons.  Damaris said that Carl and the former gym owner assured that John would be “taken care of,” and the financial accommodations enabled the family to afford sending and accompanying young John to meets, often in their mattress-equipped van to save money. Damaris would volunteer at the gym however possible, mending mats, shopping for and preparing food for meets, and stapling meet programs. John himself found time to work World Cup birthday parties in between training sessions.

“The extra morning training helped John with the core foundation which Carl was a master at teaching,” said Hebert, who then worked with John evenings on “high risk” skills.  John agrees that the coaching combination of Carl and Jason was “key to him becoming an elite gymnast.”

“Carl took me under his wing and helped me establish all of the fundamentals [in technique and form] that I have today, and Jason pushed me to perfect higher-level skills,” he said.

John’s natural ability and intense work resulted in a 2004 Future Stars National Championship at the age of 12. As one of the top 14 gymnasts in the country, John qualified for the Junior National Team and attended training camps at the Olympic Training Center in Colorado Springs several times a year.

In 2006, Hebert became John’s primary coach, both at World Cup and for his Team USA competitions. The hard work paid off: John won the USA National Championship in 2007, 2008 and 2009.

With a fourth consecutive national title in his sights in 2010–and the lure of the 2012 Olympics beyond–during his senior year in high school, John suffered a serious setback when he ruptured his Achilles tendon during the USA Championships.

To no one’s surprise, John refused to give up, opting for reconstructive surgery on his ankle and permanently relocating to the Olympic Training Center in Colorado to have access to the best rehabilitation and training services available.

To London and Beyond

In October 2012, John suffered another serious injury, tearing his ACL and meniscus. Out of action for 10 months, John rebounded later in 2013, when he was the U.S. parallel bars and high bar silver medalist and won the bronze for the parallel bars at the World Championships.

John has had a good start to 2014, winning the all-around at the Houston National Invitational after placing first in the parallel bars and pommel horse, and gearing up to compete in the Winter Cup in Las Vegas and American Cup in North Carolina in late February and early March.  While he said he has many goals in the near future, he admitted, “every day at practice [the 2016 Summer Olympics] are in the back of my mind.”

His family and World Cup coaches are incredibly proud of what John has accomplished, and are confident that he will return to the next Summer Olympic Games in two years. He continues to work hard, and according to Damaris, in between his own training and competitions, earns money by training younger children at the facility. Damaris is especially proud of the kind and caring young man that her son has become.

“He has a big heart,” she said, describing John’s desire to give back, visit hospitalized children and donate his time. Scheduling and financial constraints only enable him to make it home to the Bronx once or twice a year, and he cannot always fit in a visit to Chappaqua. He does speak with his former coaches, however, and even saw Carl Schrade at the recent competition in Houston.

“John’s goal is to become an Olympic champion in 2016 and beyond,” said Hebert, “but even though he is a gymnastics celebrity throughout the world, he still calls World Cup his home.”

Read more about John Orozco and his accomplishments at  www.usagym.org. For more information about World Cup Gymnastics and its programs, visit  www.worldcupgymnastics.com.

Debra Hand is a longtime contributor and editor for Inside Chappaqua.

Services: For more than 30 years, Jodi’s Gym has provided hundreds of thousands of children with an early foundation in movement education through nurturing and fun classes, parties, and camps for children 9 months to 12 years of age. Through age appropriate and a developmentally sound curriculum, children develop strength, balance, coordination, flexibility, focus, and discipline.

Greatest Strengths: Jodi’s Gym hires and trains “the absolute best people, far surpassing industry standards,”states Jodi, who holds a Masters degree in psychology. She began her gymnastics training in the sixth grade and went on to compete at the collegiate and national level.  “We deliver the love, the patience, the enthusiasm, the passion, the knowledge and expertise needed to maintain and deliver the ultimate in children’s programming.”

Small class size, adult participation, and no other distractions in the gym allow students to experience all that Jodi’s Gym has to offer. In a fun, safe and nurturing environment, children will learn through obstacle courses, tumbling, balancing on beams, swinging on bars, vaulting and trampoline.

It’s no wonder OTs and PTs are recommending gymnastics as a great addition to therapy. For more information, visit jodisgym.com or call 914 244-8811