For a Town You Love to Call Home

Your vote for Stronger New Castle will bring experienced, detail-oriented managers to Town Hall, positioning our town for a resurgence and improved quality-of-life.

We are running for Town Board because we love New Castle and know we can improve our future! We want to live in a community that is resilient in the face of change, welcoming of newcomers and diverse opinions, culturally exciting and safe for our citizens–young and old. After the 2016 elections, sitting back was not an option for us. Collectively, we feel a strong sense of responsibility to step up and do our part to ensure open, honest and transparent governance in our hometown. We bring the skills that are needed and the passion this town deserves. We are Stronger New Castle…for a town you love to call home!

Kristen Browde is a Family Law attorney working in Chappaqua, a trustee of a $2.4 billion dollar pension fund and a director of two Bar Associations. She served on the Town Board of Ethics and helped draft the revised Town Code of Ethics. Kristen sits on the Chappaqua School Board’s Financial Advisory Committee and the Town Diversity Committee. She has two children, including an eighth grader at Seven Bridges.

Gail Markels began her legal career as an Assistant DA. She has served as General Counsel and managed nationwide state and local government affairs programs for several industry trade associations, representing video games and motion pictures. She currently works as a consultant providing government affairs and legal services to trade associations and businesses. She is a co-chair of the Chappaqua Garden Club. Her two children graduated from Horace Greeley High School.

Ivy Pool is a public sector consultant whose clients include Bloomberg Associates and the Obama Foundation. Ivy has managed multi-million dollar projects for the State and City of New York. She earned a Master’s in Public Administration and is an Adjunct Professor at NYU’s Robert F. Wagner Graduate School of Public Service. Ivy is Vice President and Treasurer of the Greeley Hills Neighborhood Association and a Girl Scout Troop Leader. She has two children at Grafflin, where she is active in the PTA.

This is a critical election for New Castle. There are shovels in the ground all over town and there is a new and ambiguous Comprehensive Plan. You have a clear choice: the incumbents favor large-scale development in residential areas. We’ll put your interests over those of developers.

We have the ability and the temperament necessary to work together to bring about the improvements and reforms New Castle desperately needs, and to work cooperatively with the two Town Board members you elected in 2015, Jeremy Saland and Hala Makowska.

Stronger New Castle is endorsed by the Democratic Party, the Working Families Party, the Women’s Equality Party, and Up2Us, the former Chappaqua Friends of Hillary.

The following platform is a practical and financially-sound vision for a town you love to call home:

1. Stronger New Castle Will Bring New Energy, Enthusiasm and Solutions to Our Hamlets

3. Stronger New Castle Will Protect Your Investment and Keep Taxes in Check

4. Stronger New Castle Will Put Residents and our Environment First

Chappaqua, April  11— Each of three candidates in a new all-Democrat slate calling themselves “Stronger New Castle” expressed a promise to bring greater transparency and change to New Castle.

With  a unifying theme in place, Kristen Browde, running for Town Supervisor, together with Ivy Pool and Gail Markels for Town Board, on April 5, announced their respective campaigns for elective office serving New Castle. In an expression of Democratic unity, Browde stated outside Chappaqua’s Town Hall: “I’m going to be a Democrat who up and down the line will support Democrats.”

Browde, a resident of New Castle since 2004, is a divorce attorney and former Emmy-winning reporter and television news anchor at CBS News (where she worked for 17 years). She also brings a historical significance, along with national interest to a town supervisor run–as a transgender individual seeking public office in New Castle.

Two-term incumbent Robert Greenstein currently holds the seat here in the hometown to a President and twice nominated presidential candidate and Secretary of State.

Her candidacy, Browde said, “has nothing to do with being transgender or not,” she stated in her remarks, adding that each candidate brings to the table “what they are qualified to do and what they are motivated to do.” Her own work in town has included serving on both the Chappaqua Central School District’s Financial Advisory Committee and the Town’s Inclusion and Diversity Committee.

Browde added that while she is running on her qualifications, she is also not shying away from being open about her life as transgender, adding that she feels “a special honor and responsibility to those who came before us, citing Stonewall and how she “stands shoulder to shoulder” with those who have been harassed, “by being visible and not hiding my past.”

Browde stated that (as far as she knows), she is one of only eight other transgender individuals running for public office across the country, and that she is the first to be endorsed in New York by a major party.

Standing with members of Up2Us (the formerly Chappaqua Friends of Hillary group–of which Browde, Pool and Markels are all members) and with Karen La Porta and Jerry Curran, co-chairs of the New Castle Democratic Committee (NCDC) which nominated the three-candidate team, Browde said that like so many in New Castle, she was “stunned and disappointed at what happened on January 29th’” when, she said, so many expected Hillary Clinton to be sworn in as President.

In a question/answer period with reporters following her remarks, Browde said she looked forward to welcoming new residents when they arrive to live in affordable housing in Chappaqua at new multiple unit housing at the Hunts Lane site (that stirred so much controversy in town, but which is, on course).

“When the families are moved in, we will make them feel welcome and make them feel safe here,” she said.  Browde has a son at the Seven Bridges Middle School (and a second studying abroad).

Browde also expressed concern about how the town was addressing climate change issues, recalling the impact of Hurricane Sandy in town. “Sandy threw us for a loop,” she said, “and this town has done virtually nothing to be more prepared if there’s another Sandy.”

Some background: Robert Greenstein, a registered Democrat, won a second term in 2015, by a little over 300 votes, in his run against challenger Victoria Alzapiedi, the New Castle Democratic Committee nominee. Democrats Jeremy Saland and Hala Makowska won two open town board seats beating out Republican candidates Seth Chodosh and Eileen Gallagher, members of the “Team New Castle” ticket (together with Greenstein, a registered Democrat). Saland and Makowska are not up for re-election.

Markels and Pool seek the seats currently held by town board members Lisa Katz and Adam Brodsky, whose terms officially end this year.  Greenstein, Katz and Brodsky of “Team New Castle” have not formally announced their bid for re-election, but are expected to do so later this spring.

She described Pool as “a young mom with tremendous professional experience working for several terms in the administrations of former New York City Mayor Bloomberg” and Gail Markels as “an entrepreneur with extensive experience in government who will know how to negotiate effectively on behalf of New Castle.”

Pool, who has a six- and eight-year old at Grafflin, said she knows “how to take a project from a good idea to a finished project,” and that after the 2016 election she felt “a strong sense of responsibility to step up.”

Markels, who raised two children in the Chappaqua schools, promised to help promote an “open and transparent town government,” and that she “can’t wait to hit the trail and make New Castle blue.”

Full bios of the three candidates can be found at www.StrongerNewCastle.org

In addition to the new team slate, Town Justice Noah Sorkin, also announced a bid for re-election, saying that he would work hard to “safeguard the rights of individuals coming through the town.” County Legislator Michael Kaplowitz, up for re-election as well, praised the new team for a “very positive, very energetic  kickoff.”

Later the same evening, over cocktails and dinner, all three candidates had an additional chance to speak at the annual meeting and fundraiser the NCDC held at Crabtree’s Kittle House.

Jerry Curran stated that the efforts of Up2Us were “colossal” and called it a  “truly grass roots  group.”

“They envision an America in which individuals are represented fairly and treated with kindness, respect and dignity,” said Curran. “They seek to empower and support all Americans by driving political and social change to build a brighter future for us all.”

Greenberg said the group started out with 12 members (it has grown to 3,738 on Facebook), and that they will remain active in a growing resistance movement that has sprung up all over the country.

She indicated her group was going to be active bringing Democrats to office on the local, regional, and national level.  “Astorino, watch out. We are coming for you,” she said, in reference to County Executive Rob Astorino, whose seat is also up for grabs.  “We are going to come out hard and strong… We are not going to stop until we get our country back.”

Greenberg took the opportunity to also honor Geri Shapiro, a former campaign manager for Secretary Clinton in a second successful run for U.S. Senate. Shapiro now works on behalf of U.S. Senator Kirsten Gillibrand. Shapiro, for her part, recalled the Clintons arrival in New Castle and honored the memory of both Town Supervisor Marion Sinek and Maureen Keating (who she called ‘a force of nature’) in helping to welcome the Clintons to the community.

Shapiro praised the Up2Us group, expressing appreciation for the friends she has made. She also honored Oscar Flores who worked with the Clintons in the White House, and continued to in Chappaqua. “He is such an important part of this community and all of our lives,” Shapiro stated.  “Oscar’s response is always the same, “I’ll take care of it.” And that usually means “the sun will come out tomorrow.” Oscar rose to the podium to thank Geri.

Finally, also honored, were a group of Horace Greeley high school students–Amanda Cronin, Claire Hotchkin, Billy Perlmutter and Meaghan Townsend–for their editorial work at the Greeley Tribune, and for ‘breaking tradition’ in endorsing Hillary Clinton during the Election.

Grace Bennett is Publisher and Editor of the Inside Press which aims to follow Election 2017 in New Castle. 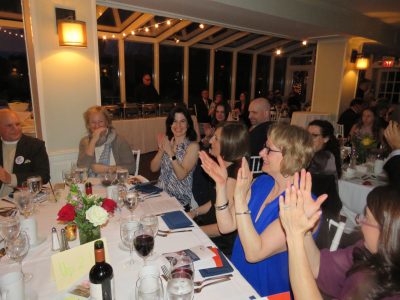