“I always listened to my mother.”

January 27, 2023–In a panel on the stage at the Chappaqua Performing Arts Center yesterday eve, Helga Schmitz-Fernich Luden–holding multiple documents and pictures to help relay details–shared her harrowing but ultimately triumphant and inspiring story of herself as a very young girl (she was born in 1934) surviving the Nazi invasion. Her family was the only Jewish family in Ulmen (a town in the Rhineland region of Germany).

Despite her family’s rich history as residents of the town, she and her mom after being separated from her father–who was sent to a slave labor camp–were sent to the Gurs transit camp in the Basque region of southwestern France.* There, her mom, growing increasingly aware of the Nazi plans, each day actively coached her young daughter to prepare for a daring escape–instructing her ‘to play dumb’ with her German-sounding name, and also promising to join her.

While of course terrified at the prospect, Helga also offered, “I always listened to my mother.”

As the dangers escalated, her mother finally sent her daughter on her way with money hidden in her clothing too (the money had been saved in the wires of her mom’s girdle!). This part of the journey was painful to contemplate, an exceptionally young Jewish girl traveling alone in the rolling hills of Europe, in dire danger. She described being found passed out in a field but, miraculously enough, revived by a group of French Jewish partisans who helped her find refuge first in a convent and later in an orphanage.

True to her word, her mother (who eventually escaped Gurs too) and she were reunited there! From another safe haven in Marseilles, Helga and her mom boarded the famous ship, the Serpa Pinta, which was heading to North Africa–it held 750 Jewish men and women in its hull in secret and these refugees were rarely allowed to come on board, Helga explained.

Helga related another miracle as she and her mom found her father among the refugees too, having survived and escaped from a slave labor camp. He was emaciated but alive. A challenging (to say the least) journey, the ship would span two continents over six weeks as they were turned away from different countries for refuge, including sadly, from the New York Harbor in the United States.

Eventually, the ship was accepted in the Dominican Republic, its government saving its Jewish refugees, after 100 or more of whom had already perished from typhoid and other life threatening conditions (funerals were held daily on the ship, Helga related, through tears). Their journey to freedom began in earnest as they settled into farm life in the seacoast town of Sousa.*

In 1946*, the family, which now included a young sister to Helga, was finally allowed to emigrate to the United States, bringing the family to the melting pot neighborhoods of Inwood and later, the Lower East Side of Manhattan–where Helga also related a touching and funny story of how she met her ‘beshert’ and came to have three children, 12 grandchildren and four great grandchildren. Throughout her presentation, Helga communicated gratitude for the incredible strokes of luck that aided her family’s survival.

The Town of New Castle Holocaust and Human Rights  Committee and the students of Horace Greeley High School’s ENOUGH club made this inspiring presentation possible. Helga’s story was relayed after remarks from students of ENOUGH,  from New Castle Town Supervisor Lisa Katz, and from state Senator Peter Harckham.

*Additional facts about Helga’s story are from the Holocaust and Human Rights Education Center, www.hhrecny.org  Helga is member of the Center’s Survivor Speaker’s Bureau. 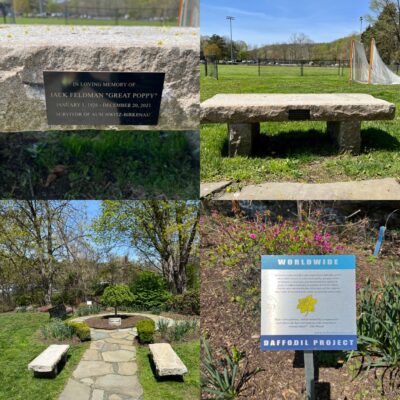 The Daffodil Project is a worldwide project to commemorate the lives of the children lost during the Holocaust.  The goal is to plant 1.5 million flowers across the world – one daffodil for every child killed. https://www.daffodilproject.net.  In October of 2019, the community planted 750 daffodil bulbs at the New Castle Holocaust Memorial as part of the Daffodil Project.

The community was also inspired by the middle school and high school winners of the Third Annual Writing and Arts Contest for Holocaust Remembrance.  The first place winners in each category shared their essay and/or artwork.  The art is currently on display at the New Castle Town Hall.

The essays can be read here: https://mynewcastle.org/602/Holocaust-Human-Rights-Art-Writing-Winne