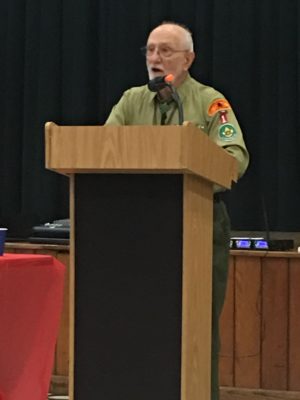 News from the Town of New Castle:  Last Wednesday we marked the end of an era!  Dr. William Flank has stepped down as Troop 1’s Scoutmaster, a position he has held since 1990.  He has been Troop 1’s longest serving scoutmaster.  He leaves behind some very big shoes to fill.  Over the Troop’s history, which is 105 years, 112 scouts have reached the rank of Eagle Scout.  Dr. Flank participated in 94 of the Eagle projects.  Under Dr. Flank’s tenure, 55 of his Scouts became Eagles!  “We would be hard pressed to find anyone, anywhere, who has trained more Scout leaders!,” said Town Supervisor Robert Greenstein.  “He will be missed but always remembered by those whose lives he’s touched, and he has touched many young lives, for sure!”