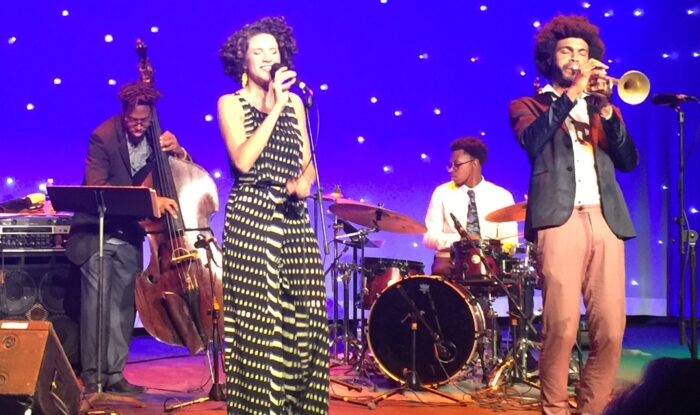 Founded in 2017, the Chappaqua Performing Arts Center (ChappPAC) was established to provide diverse arts and cultural programming for residents of New Castle and communities throughout the region. Located in the heart of Chappaqua at Chappaqua Crossing (the former Reader’s Digest campus), this amazing 425-seat venue was saved from demolition and brought back to life through a unique consortium of municipal and private support.

ChappPAC’s programming presents a diverse, imaginative and exceptionally entertaining mix of arts and cultural opportunities such as art exhibits, theater, comedy, author talks and perennial favorites such as “The Rocky Horror Picture Show” and an interactive “Elf” experience. Artists such as Tim Kubart and the Space Cadets have had children dancing in the aisles, while the sweet sounds of Vanessa Williams and the rocking music of the Allman Brothers have delighted adults. ChappPAC also is the home of the Chappaqua Orchestra, and has hosted master acting classes with current Broadway stars. ChappPAC offers a full slate of children’s and senior programming and also aims to provide programs and opportunities for under-served communities and people with special needs.

The Town’s Arts and Culture Committee oversees the facility and is the liaison between the Town and the needs of ChappPAC. The Friends of ChappPAC, a 501(c)(3) non-profit corporation, is the entity sanctioned to work with the Town to provide financial support to ChappPAC for capital projects and programming at the theater. For information about ChappPAC and future programming, visit chappaquapac.org. For information about the Friends of ChappPAC, contact friendsofchapppac@gmail.com.

Courtesy of the Town of New Castle Arts and Culture Committee

Making a Difference in the World to Overcome Bigotry, Poverty & Hatred

Nestled on Wheeler Avenue in Pleasantville are the exhibition space and offices of The Gordon Parks Foundation with its mission to permanently preserve the work of Gordon Parks, make it available to the public through exhibitions, books, and electronic media, and support artistic and educational activities that advance what Gordon described as “the common search for a better life and a better world.” The Foundation shines a light on the remarkable career of the iconic creative talent of Gordon Parks.

Parks was an extraordinary artist with an amazing range. His portraits were diverse, from socialites like Gloria Vanderbilt, civil rights leaders like Martin Luther King Jr. to sports figures like Muhammad Ali. “Gordon Parks used the power of art to make a difference in the world and to overcome bigotry, poverty and hatred,” says Peter W. Kunhardt, Jr., the Executive Director of the Foundation. As a photojournalist, Parks captured the poverty and racism that affected Black America.

“Gordon broke barriers as the first African American photographer to work at Life Magazine and worked closely with my grandfather Phil Kunhardt who was the managing editor,” says Kunhardt.

Gordon Parks (1912-2006), a multi-talented, modern-day Renaissance man, was born into poverty and segregation in Fort Scott, Kansas.  As an itinerant laborer, he worked as a brothel pianist and railcar porter among other jobs before buying a camera from a pawnshop, training himself to become a photographer. He also found success as a writer, composer and film director. “He was the first black filmmaker to direct a studio motion picture, and his first film Shaft helped create a genre. But Parks’ enduring contribution was to break down the barriers of racism in Hollywood,” writes Desa Philadelphia for the Directors Guild of America.

Supporting the Next Generation of Artists Inspired by Parks

Each year the Foundation celebrates Gordon Parks’ legacy and honors those who continue his vision for social change at The Gordon Parks Foundation’s Annual Awards Dinner and Auction. The Gordon Parks Foundation Award is given to individuals who have enriched our lives in ways that reflect Parks’ ideas and goals by using creative means to inspire the next generation. The Patron of the Arts Award recognizes and celebrates individuals with a deep appreciation of the arts. Recipients receive this special recognition for their support and promotion of artistic creativity in the visual arts, film, literature, or performing arts.

Kunhardt sums up the impact of the Foundation’s work. “Through initiatives such as our scholarship and fellowship programs, as well as these annual awards, we continue to empower the next generation of change-makers and those who are current forces for social justice and the arts.”

The exhibitions at The Gordon Parks Foundation space feature fellowship recipients, curated selections of Gordon Parks’ work, and works by artists whose work is influenced by Parks.

I don’t think there has ever been a more important time in my life to support art and artists. They help prevent us from becoming complacent or numb to the challenges we face, while urgently illuminating those challenges. They show us what is possible when love and kindness, not hate and indecency, are celebrated and empowered. And they offer us hope, pushing us toward what Gordon called “the common search for a better life and a better world.
– Chelsea Clinton

Not to Be Missed Exhibits

Must’ve been a wake-dream is a celebration of Rosales’ work as a 2019 Gordon Parks Foundation Fellowship recipient, which includes collaborations with Latinx and LGBTQ communities to examine the interplay between photography and community. Through her careful collecting, preservation, and presentation of vernacular photographs, letters, party flyers and ephemera representing Latinx Southern California youth culture, Rosales creates an expanding archive that brings visibility to a community that has been overlooked, misrepresented and criminalized. Also on view during Must’ve been a wake-dream will be a group of Gordon Parks’ photographs, selected by Rosales, from Parks’ celebrated Harlem Gang Leader series, made as the first African-American photographer for LIFE magazine in 1948.

Hank Willis Thomas has an ongoing vested interest in photography as a documentation of history and a universal means for people to represent their stories. Exodusters examines the representation and depiction of history, particularly during a significant moment in the pursuit for freedom and liberty during the Great Depression in Dust Bowl America. Thomas draws upon the archive of Gordon Parks’ seminal and semi-autobiographical film The Learning Tree (1969) that depicts the fictional Cherokee Flats, which is based off of Parks’ hometown in Fort Scott, Kansas, where he returned to produce the movie.

The Gordon Parks Foundation welcomes visitors to view the rotating shows of photography in their exhibition space. Hours are Monday-Friday, 10 a.m. to 4 p.m. Closed Saturdays and Sundays. Admission is free.