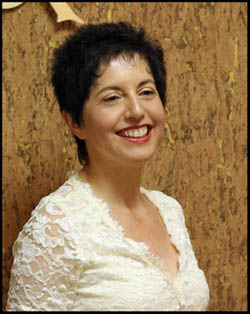 A Commitment to Individualized, Integrated Nutrition has Helped Thousands to Better Health

Ms. Khader is a registered dietitian, holding a Master of Science degree in nutrition from New York Medical College. She is a Master Fellow and featured presenter with the Institute for Human Individuality, and works closely with the European Institute of Personalized Prevention. She is the author of The Food Combining/Blood Type Diet Solution, and is frequently sought as a lecturer, author, and expert commentator for radio, television, and print media.

“I began offering nutrition consulting in 1990, with a real commitment to getting to know the specific needs and preferences of each client, so that I could provide customized nutrition plans fine-tuned to each individual,” explains Ms. Khader. “Right away, people were surprised how effective a carefully-tailored nutrition solution could be, and how much easier it is to stick to a plan that works so well. A lot has changed in the last twenty-five years, but that dedication to individual care hasn’t wavered, because it has made such a big difference for so many people.”

Ms. Khader’s unwavering dedication, as well as the considerable success her clients have experienced and the word-of-mouth reputation that success has generated, has been a major factor in her success. In 2009, she founded The Khader Center, a full-service integrated nutrition center that offers a number of targeted holistic health solutions, including Ms. Khader’s expert nutrition advice. The Khader Center quickly gained popularity as a friendly, welcoming place to achieve optimal health.

For more information about Dina Khader and The Khader Center, visit www.DinaKhader.com.

About The Khader Center

We look forward to Holidays as a joyful time to enjoy celebrating family traditions and spend time with friends and loved ones. Though they are festive times, holidays can take a toll on our bodies. It’s easy to get caught up in the frenzy of last minute shopping, cooking, entertaining and partying. Whether you are traveling to celebrate or hosting, there is stress. There is the pressure of coordinating schedules, getting along with relatives, and trying not to overeat. Overeating can be a band-aid for stress, anxiety, or depression. The stress of the holidays can bring emotional issues to the surface. In fact, the Holiday Season is known to be the most stressful time of the year. All that pressure causes surges in cortisol, the stress hormone. What seems cruel is that increases in cortisol cause fat storage, in particular around your middle! Cortisol wreaks havoc with your metabolism and is one of the reasons why you can diet and exercise…and still gain weight. Most of us relax over the holidays by sitting. We sit to watch TV, sit to watch movies, sit to eat holiday meals, and sit in a car or plane and travel to where we sit with friends and family. Have you ever noticed that when you sit for a few hours it becomes increasingly difficult to get up? You may even begin to feel depleted, not rested. Why is that? When you sit for an extended period of time, your heart slows down, decreasing your circulation, and you get less oxygen to your brain. Worse, your metabolism slows down.

So, what can you do?

Well, we all know the key to maintaining weight and avoiding weight gain over the holidays is to: (drumroll please) eat less and move more. I know, it’s MAGIC.

If you get up frequently to move about, you’ll feel a lot better. If you plan ahead how you will fit exercise into your holiday schedule, you’ll have a much greater chance that you’ll actually do it. Go for family walks, call a workout buddy to meet at yoga or walk your dogs together–just move.

When you eat with awareness you’re much more likely to eat what you really want (rather than just what’s around) and to stop when you’ve had enough (rather than when the there’s no food left). Eat with relish and gusto, ’tis the season to be jolly, after all! Take your time, instead of eating while standing up or while doing something else. Enjoy flavors, textures and the experiences.

•Studies show that people who eat breakfast eat less for the rest of the day than those who skip breakfast.

•Be sure to drink enough water. Many times we think we’re hungry but we’re really just thirsty. Stock up on sparkling waters and delicious teas.

Limit the Calories you Drink

You may not realize how many calories you are drinking during the holidays. Liquids don’t nourish or fill you up. These empty calories easily lead to extra pounds of fat on your body. Most cocktails have around 150 calories, but sips here and there can pack a whopping 300 calories, 20 grams of sugar…and more! To reduce calories, choose non-sweet cocktails and “cut” wine or fruit juices with sparkling mineral water. Drink one glass of water for every cocktail or glass of wine. This will save a lot of calories…and possibly rescue you from a nasty hangover as well.

How do you want to remember your holiday? You might not want to look back with regret about wasted time, worry, stress and any overeating. Anna Quindlan wrote a beautiful editorial about how she saw an old picture of herself and her young children and regretted that she didn’t recall being there. Make your gift to yourself to be entirely present during the holidays. Being in the moment makes it that much easier to enjoy your food…and the conversation. Try it, and you’ll notice how much more satisfying your holidays feel.

Eve Fogler is a NY State licensed Health Coach specializing in Eating Psychology and Weight Loss, and Co-President of Well Beyond Cravings, LLC, an online and in-person Weight Loss Coaching Program. Go to WellBeyondCravings.com to find out more.

For the parent or guardian who wonders whether their child is making healthy choices in the school cafeteria or changing into sneakers for gym class – you may not need to wonder anymore. It appears that students in the Chappaqua School District are consistently being trained in how to lead a healthy lifestyle.  The district says they have made great strides toward creating a wholesome environment, whether in the classroom, the gym, the cafeteria, or even after hours during extracurricular activities.

Each school has unique and original ways of keeping their students fit and healthy.  And although it got off to a slow start, there has been a huge reform period regarding health standards within the district over the past few years. “When I first started in the late ‘90’s, it was common to see burgers, fries, and soft drinks in the cafeteria,” said Martin Fitzgerald, head principal of Robert E. Bell Middle School, “Today, if I saw a student drinking from a soda can, it would stick out to me, because it’s just unheard of.” What the district seems to have learned is: if you offer the students a side of French fries, they will eat it and enjoy it. However, if you offer them a baked potato, they’ll eat it and enjoy it as well–just in a different way than the French fries. “This is where the district has been amazing,” said Fitzgerald, “We have excellent healthy fare here.  We have taken it to another level.”

Consumer science classes teach Chappaqua students how to prepare nutritious meals and lead a balanced life in terms of healthy eating and physical activity.  This is where the students would learn, as per French fries vs. baked potato example, why it’s good to enjoy the baked potato and how it is beneficial for their health, when chosen over the fries.

It’s safe to say that ‘Sloppy Joe Day’ is either extinct or very rare in the Chappaqua cafeterias.  However, it  was not a quick transition, according the Fitzgerald.  It took years of research, assimilation and nutritional education before the conversion could really be complete.

Part of that conversion is how the district embraces sustainability.  Bell, Seven Bridges Middle School, and Douglas E. Grafflin Elementary School have all had a garden or greenhouse available to students.  Bell students had the chance to top pizza with their very own veggies grown right in the school garden.

The district says it is taking initiative and working to embed a healthy mindset in their students at a very young age, in hopes of instilling that mindset for life.  Students are encouraged to embrace community involvement and support local establishments, which makes for a healthy way to keep busy when school is out.

“Many of our students involve themselves in community service, either through school clubs such as SHARE (Students Have A Responsibility Everywhere) or on their own,” said Andrew Selesnick, former principal of Horace Greeley High School. “Their contributions to the community are just one more way that the students stay healthy of mind as well as body.”

Just as a healthy evolution has taken place within extracurricular activities and the school cafeteria, physical education has made quite the transition.  With less focus on victory and more on physical health gym class in the Chappaqua district is no longer specifically for those with a competitive edge.

“For next year, a course that previously focused on meditation techniques has been reworked and is now titled ‘Walking for Life, Mindfulness, and Relaxation’,” said Selesnick. “The change was made in response to the latest research on the value of something as simple as walking.”

District-wide, it appears that there is one common theme for the recent changes in the physical education department.  There is a strong emphasis on encouraging a mind-body connection with every student.  Also, Chappaqua schools want to encourage inclusion and connecting with one another–even when they are on opposing dodge ball teams during gym class…

“We make sure we don’t blur the line between physical education and coaching,” said Fitzgerald, “We want to give the students a range of exposure to a variety of activities.”

The environment of after-school sports has changed just as much as gym classes have.  In the Chappaqua schools, especially in the lower grades, competition is not as much a concern as having an enjoyable and social experience is.  It may be stereotypical for school athletic departments to say that they care about the “team experience” more than winning, but in the case of the lower Chappaqua schools, it appears to really be what goes on, with good reason.

“At the middle school we have a non-cut policy; we are all about inclusion and giving a range of opportunity,” said Fitzgerald.  “I believe, philosophically, that having a program that highlights being active, social, and connected rather than competitive brings more kids to the team.”

Chappaqua’s lower schools believe that by taking every student who tries out for a team, they are more likely to come out of their shell and advance both physically and socially.

The more students that are encouraged to play sports while in middle school, the more that will move on to participate in high school–simple as that. This could account for the fact that, according to Selesnick, Greeley students are involved in the athletic program “in very high numbers.”

“The children are coming up more and more with awareness of sustainability and overall health,” said Fitzgerald, “It’s a K-12 experience in the district.”

Gina Faustini is in her junior year at Quinnipiac University. She is majoring in Media Studies, and worked for Ruby Media Group this past summer.