At a music cocktail charity event at Lexington Square Cafe on November 18th, the Flood Sisters proudly stated that they were celebrating “saving nine lives thus far.” Here are a few highlights from a successful evening that brought together so many supporters and friends:

“My sisters and I focus on spreading awareness to the public on living kidney donation and kidney disease, and basically, on how someone can save a life,” said Jennifer Flood. “We provide matching services to those in need nationwide. Our future plans include going into the nearby schools and spreading awareness for kidney health.”

Dave Bickler said that he performed to support the Flood Sisters who “are doing fantastic work to help others in need.”

For more information or to support the Flood Sisters Foundation, visit www.floodsisters.org 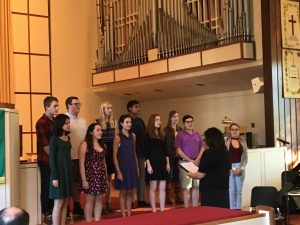 From here in New Castle, to the Beacon Theatre in Manhattan, to the Top of the Standard in Los Angeles, and to Lola’s Trailer Park in Fort Worth, Texas, musicians are banding together for The Concert Across America to End Gun Violence on Sunday, Sept. 25th.

“I’m inspired by the organizers for the Chappaqua concert, whose hard work has made the message from the Lower Hudson Valley loud and clear: we cannot wait one more day for commonsense gun safety measures that are supported by the vast majority of Americans. I will continue fighting in Congress to keep our families and communities safe. And together, we will win this fight.” –Congresswoman Nita Lowey

Spearheaded by Massachusetts-based Stop Handgun Violence (SHV), Faiths United to Prevent Gun Violence, and dozens of other organizations committed to reducing gun violence, the concerts will feature a diverse array of artists performing at venues ranging from churches and school gymnasiums to honky-tonks and hotel rooftops. Artists are asked to perform at least one song that gives voice to the more than five million Americans who’ve been murdered by a firearm since the mass shooting at the University of Texas on Aug. 1, 1966.

Artists with pre-existing commitments can still participate with a social media shout-out on their own Facebook fan pages and on their Twitter accounts using hashtags, #ConcertAcrossAmerica to #EndGunViolence.