Just Between Us: With so many within the GOP and other conservative ranks speaking out against the prospective Republican nominee, the message is clear that a Trump candidacy is being considered a dangerous development from both sides of the political aisle.

The Hillary Clinton campaign office states: “Last night, Donald Trump effectively captured the Republican nomination, successfully bullying his way through a crowded primary field. However, many prominent activists, journalists and elected officials in his own party have figured out what Hillary Clinton has argued all along: Donald Trump is too big a risk for America.

“Take a look at the large group of prominent conservatives who are already promising that they’ll never vote for Trump: 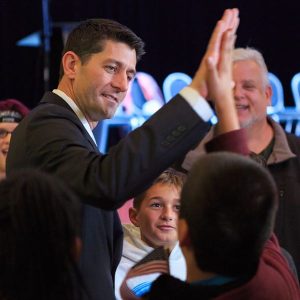 Rep. Ileana Ros – Lehtinen [R-FL]: “I don’t plan to vote for Donald Trump,” she said. “I don’t feel in my heart that I could support him.”

GOP Senate candidate Chris Vance: Vance, who is challenging four-term Democratic U.S. Sen. Patty Murray, blasted Trump’s views on trade, economics and foreign policy as “naive,” “wrongheaded” and “insane.” As a former state GOP chairman, Vance said he takes “no joy” in refusing to support his party’s presidential candidate, “but I must place conscience and principle ahead of party.”

Former Gov. George V. Voinovich [R-OH]: “I wish we had a better candidate”

Former Lt. Gov. Bruce E. Johnson [R-OH]: “Donald Trump hasn’t impressed me at all with his ‘wall’ nonsense, the trade wars, the nuclear proliferation and his bullying attitude….I think for the sake of Rob Portman and (Westerville-area U.S. Rep.) Pat Tiberi and other state and local officials, I hope (Republicans) go to the polls. Whether they can find it in their conscience to vote for Donald Trump, I couldn’t care less.”

State Sen. Shannon Jones [R-OH]: “said just because Trump is now the Republican nominee ‘that doesn’t mean I have to support him.’”

Ward Baker, executive director of the National Republican Senatorial Committee: “In a new sign of the Republican Party’s reservations about Mr. Trump, the top strategist in charge of defending Republican control of the Senate said in a briefing for lobbyists and donors on Thursday that the party’s candidates should feel free to skip the nominating convention in Cleveland in July.”

Bill Kristol: “When you embrace the endorsement of a rapist… I deplore that. On the day of the Indiana primary he spins this conspiracy story about Ted Cruz’ father being complicit in the assassination of a president… I mean that level of willful disregard of all facts…it was the mocking of the disabled New York Times reporter, which is such a humanely grotesque thing to do.”

Jeb Bush: “Donald Trump has not demonstrated that temperament or strength of character. He has not displayed a respect for the Constitution. And, he is not a consistent conservative. These are all reasons why I cannot support his candidacy.”

Jennifer Nassour, former chairwoman of the Massachusetts Republican Party: “I’m hopeful that there will be someone else who is challenging Trump on the Republican ticket at the convention. If not, then write someone in. It’s a shame to just waste our vote, but I cannot see myself voting for Trump.”

Mac Stipanovich, former Chief of Staff to Gov. Bob Martinez: “If I thought the election hung on my vote, I would probably vote for Hillary Clinton, anything would be better than Donald Trump. He would be a disaster for the Republican Party and harmful to the nation.”
Speaker Paul Ryan [R-WI]:”U.S. House Speaker Paul Ryan said on Thursday that he can not currently support Donald Trump, the presumptive Republican nominee. “I’m just not ready to do that at this point,” Ryan told CNN, adding that he hopes to be able to do so in the future.”

Rep. Scott Rigell [R-VA]: “My love for our country eclipses my loyalty to our party, and to live with a clear conscience I will not support a nominee so lacking in the judgment, temperament and character needed to be our nation’s commander-in-chief. Accordingly, if left with no alternative, I will not support Trump in the general election should he become our Republican nominee.”

Former Romney staffer Garrett Jackson: “Sorry Mr. Chairman, not happening. I have to put country over party. I cannot support a dangerous phony.”

Former top Romney strategist Stuart Stevens: “I think Donald Trump has proven to be unbalanced and uniquely unqualified to be president. I won’t support him… Everyone has to make their own choice. I think Trump is despicable and will prove to be a disaster for the party. I’d urge everyone to continue to oppose him.’”

Rep. Carlos Curbelo [R-FL]: “I have already said I will not support Mr. Trump, that is not a political decision that is a moral decision.’”

Sen. Ben Sasse [R-NE]: “Mr. Trump’s relentless focus is on dividing Americans, and on tearing down rather than building back up this glorious nation. … I can’t support Donald Trump.”

Daily Caller editor Jamie Weinstein: “If it’s Trump-Hillary with no serious third party option in the fall, as hard as it is for me to believe I am actually writing these words, there is just no question: I’d take a Tums and cast my ballot for Hillary — and I suspect so would many other life-long conservatives, whether they are willing to admit it now or not.”

Weekly Standard’s Stephen Hayes: “This is what political division looks like. Trump’s claim to be a unifier is not just specious, it’s absurd. This casual dishonesty is a feature of his campaign. And it’s one of many reasons so many Republicans and conservatives oppose Trump and will never support his candidacy. I’m one of them.”

Former McCain adviser Mark Salter: “The GOP is going to nominate for President a guy who reads the National Enquirer and thinks it’s on the level. I’m with her.”

Former NJ Gov., Christine Todd Whitman on a Clinton/Trump matchup: “I will probably vote for her.”

Former RNC Chairman Mel Martinez: “I would not vote for Trump, clearly.”

Former VA Senate candidate, Ken Cuccinelli on Trump: “When you’ve got a guy favorably quoting Mussolini, I don’t care what party you’re in, I’m not voting for that guy.”

Former Bush spokesman Tony Fratto: “For the thick-headed: #NeverTrump means never ever ever ever ever under any circumstances as long as I have breath never Trump. Get it?”

Conservative blogger Erick Erickson: “Reporters writing about the “Stop Trump” effort get it wrong. It’s ‘Never Trump’ as in come hell or high water we will never vote for Trump”

Fox News’ Steve Deace: “Apparently @secupp has a #NeverTrump list to see who keeps their word to the end. You can sign my name in blood.”

Republican strategist Patrick Ruffini: “I will never vote for @realDonaldTrump. Join me and add your name athttp://NeverTrump.com . #NeverTrump”

Townhall editor Guy Benson: “Much to my deep chagrin (& astonishment ~8 months ago), for the 1st time in my life, I will not support the GOP nominee for president.”

Wisconsin conservative radio host Charles Sykes: “I suppose I should clarify: #NeverTrump means I will nevereverunderanycircusmtances vote for @realDonaldTrump”

Editor at RedState, Dan McLaughlin: “For the first time since turning 18, I will not vote for the Republican candidate for President.”

George Mason law professor, Republican David Bernstein: “ “I’d rather Hillary Clinton win. I’d rather (and I never thought I’d say this)… If Trump wins the nomination, I will actively seek to prevent him from becoming president.”

Conservative columnist George Will: “If Trump is nominated, Republicans working to purge him and his manner from public life will reap the considerable satisfaction of preserving the identity of their 162-year-old party while working to see that they forgo only four years of the enjoyment of executive power.”

Former Romney adviser Kevin Madden: “I’m prepared to write somebody in so that I have a clear conscience.”

Pete Wehner, former speechwriter for George W. Bush: “I will not vote for Donald Trump if he wins the Republican nomination.”

Bill Kristol, editor of The Weekly Standard: “Donald Trump should not be president of the United States. The Wall Street Journal cannot bring itself to say that. We can say it, we do say it, and we are proud to act accordingly.”

Undersecretary of State under George W. Bush, Eliot Cohen: “I will oppose Trump as nominee. Won’t support & won’t work for him for more reasons than a Tweet can bear.”

Washington Examiner’s Phillip Klein: “I have officially de-registered as a Republican.”

Hypeline News’ Kyle Foley: “I’m willing, if need be, to vote Hillary. That’s how strong my disdain is for Trump #NeverTrump”

Republican pollster Kristen Soltis Anderson: “I registered Republican when I was 18 because I thought free markets and liberty were important. Not sure what “Republican” means today.”