Chappaqua, NY— Over 100 people attended “A Rally for Change-Stand Up Against Racial Injustice” on June 13 to demonstrate their commitment to making a change going forward. Horace Greeley High School alumni and members of the New Castle Against Racism group, Urka Swinney and Lara Fuhrer, organized the event working with other groups to make the rally possible.

“New Castle Against Racism is a group of Greeley students and alumni that just wanted to come together and make a change. So, we paired with Up2Us and some other small Facebook groups to put on this rally for change so we could make progress in the community,” said Swinney.

In addition to Up2Us, the group worked with the New Castle town board and with the Town of New Castle Holocaust and Human Rights Committee.

As of Friday morning, the day before the rally, the group had two speakers confirmed but dedicated energy and resources to securing others to ensure the rally would be a success. By Friday evening, the group had 15 speakers* lined up.  (See the full list of speakers at the end of this article.)

“I am proud to have been one of many involved in organizing A Rally For Change. The entire process was inspiring and encouraging to see how many individuals were dedicated to making this happen,” said Fuhrer.

Another Facebook group New Castle Against Racism paired up with is one that is co-administered by Horace Greeley High School alumna, Juliette Harrison.

“I think people in town need to start focusing on practicing anti-racist action which is one of the reasons I created the Facebook group the dialogue for anti racism where hopefully we can have zoom conversations to get that face to face interaction where the conversation is humanized a bit,” said Harrison.

Community members eager to both learn and to support black voices filled the rally.

New Castle Town Councilman Jason Lichtenthal said he attended the rally to continue to learn and to translate that education into action.

“It’s important for me to be an ally for those who struggle to have a voice and to make sure that as a white cisgender heterosexual male that it is my job to listen and then go and act. I find that incredibly important,” said Lichtenthal.

Greeley senior Jacob Miller also attended the rally to continue to learning how to become a stronger ally.

“I really wanted to come today because I think Chappaqua, along with the rest of the country, still has a long way to go in terms of overcoming its racist tendencies and I think just by uniting and listening to people in the community and hearing their stories, I will be better able to understand what I can do to be a better and more supportive ally,” said Miller.

Fuhrer also understands the importance of listening to become a stronger ally.

“It is important for our BIPOC community members to see and hear that they are not alone, anymore at least, and that we want to amplify their voices and for our White community members, like myself, to hear their stories and learn to become better allies. This is a movement that our community is dedicated to for the long haul,” said Fuhrer.

After the space began to fill with people wearing masks, holding signs and socially distancing, Swinney gave an introductory speech emphasizing the importance of committing to making changes going forward.

Then, a list of names was read. These names belong to black people who lost their lives to racial violence such as Eric Garner, Ahmaud Arbery, Breonna Taylor, George Floyd and D.J. Henry.

Henry was a college student at Pace University when he was shot by police in Thornwood, New York in October of 2010. His name was on posters at the rally on Saturday and shouted when the timing was appropriate as his death took place nearby.

After the reading, the crowd observed a moment of silence before the speakers addressed them.

People from different backgrounds ranging from current students in the Chappaqua Central School District to local clergy and to the current New York State attorney general shared their insights and encouraged the crowd to continue to take action and make a difference. The sole person of color on the Chappaqua School Board, Victoria Tipp, gave an impassioned account of her own background, and stated powerfully at the outset: “We know systemic racism is a death sentence for black people and people of color. We are here to reject the myth of ‘the other’, to affirm our common humanity, and demand bold changes in our institutions.”

New York Attorney General Tish James summoned loud applause from the community members in attendance when she used part of her time to discuss how to learn, how to grow and how to make change come from this experience.

“I see this really as a teaching moment that we need to be reminded of the words of Dr. Martin Luther King-that power is the strength required to bring about political, social and economic change,” said James. “And that power at its best is love, implementing the demands of justice, and justice at its best is love correcting everything and everybody who stands in our way for a more perfect union.”

The momentum continued to build as Emily Nobel, a Horace Greeley senior, shared a statement she read at the interfaith vigil held on June 7.

“I don’t want the only place I ever feel completely safe to be my own bedroom, the minute I step outside my door, my pigmentation will determine how I am treated and it’s overwhelming,” said Nobel. “I don’t always want to be reminded that my skin color, something I had no choice over, something that I was born into, could be the same reason that I am perceived as a threat, that I am the one who is dangerous when all I ever did was live. That’s all we want to do. We want to live.”

Nobel expressed that she was nervous to speak among the voices of impactful leaders as a high school graduate but is learning what it means to be powerful.

“I’m a small part of a movement that’s been going on before I was born. It’s almost comforting to know I’m only a very small part of this movement, because that means that there’s many people working to make this movement provide long lasting change. I feel that the only thing I really know is how I feel. Trying to describe how I feel to people, so they can understand just a glimpse of what it’s like to be me, has been most effective in making my own impact,” said Nobel.

New York State Senate Majority Leader Andrea Stewart-Cousins spoke about the 1999 Bruce Springsteen song, “American Skin (41 Shots)” written about the police shooting death of Amadou Diallo, a black man killed in the vestibule of his apartment in the Bronx by four New York City police officers. The officers fired a total of 41 shots hence the name of the Springsteen song.

“Bruce’s haunting refrain was ‘it ain’t no secret, no secret my friend, you can get killed just for living in your American skin.’ That was in 1999 and I for that brief moment thought that there were people other than people of color who understood what was happening to communities of color, I thought surely the working class hero that people admire and love would be able to break through that barrier but it didn’t happen,” said Stewart-Cousins.

Fuhrer received notes after the rally about how appreciated and inspiring the event was. One note in particular stood out to her.

“One of the Town Board members shared that her 11-year-old son told her after that he “felt a new understanding after hearing the speeches” and this deeper understanding is exactly why a rally like yesterday’s is important. It forces us to acknowledge our bubble of Chappaqua and challenges us to begin deconstructing our privilege and become accomplices in the movement,” said Fuhrer. 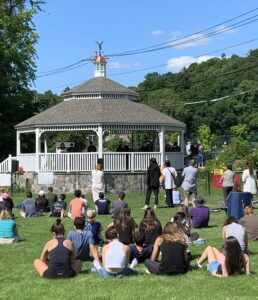 Ivy Pool and Jeremy Saland– New Castle Town Supervisor and Deputy Supervisor Pool is starting a Council on Race and Equity to create an action plan for our community.

Victoria Tipp– Member of the Chappaqua Central School District Board of Education, president of the Westchester Putnam School Boards Association representing 54 school boards in the two counties, on the steering committee of the Lower Hudson Education Coalition advocating for the 77 school districts in Westchester, Rockland, Putnam and Dutchess Counties. 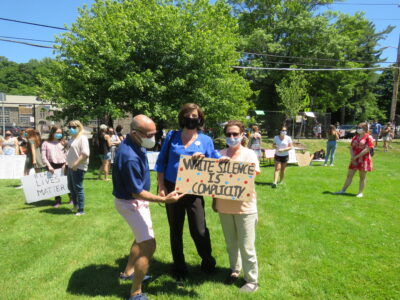 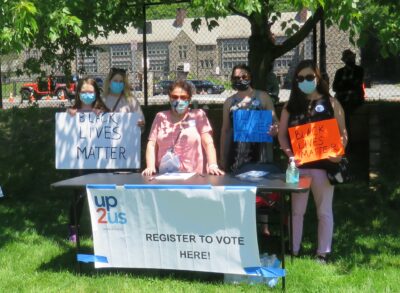 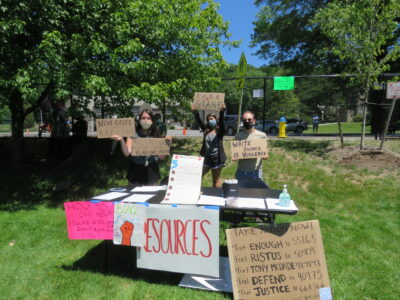 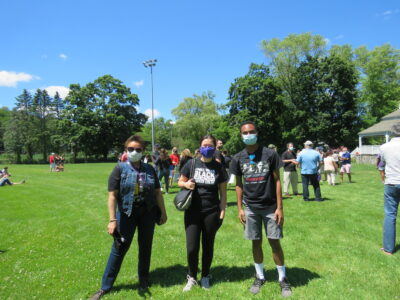 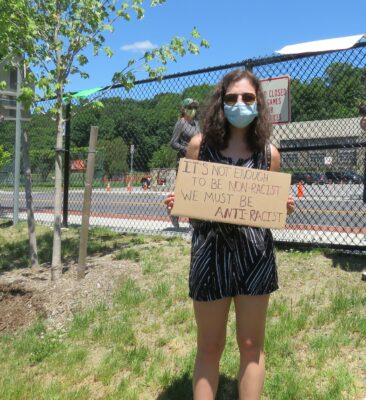 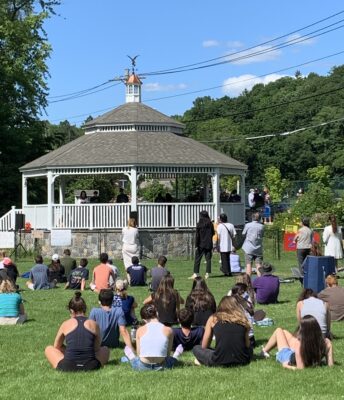