In a record turnout at Chappaqua’s 2016 Memorial Day Parade: Veterans, First Responders, Marchers, and esteemed parade attendees including the Clintons and Governor Cuomo…first and foremost, honored our vets.

Chappaqua, NY—Residents and visitors to town gathered with great anticipation along King Street and Greeley Avenue on Monday for the annual Memorial Day Parade in Chappaqua. A bit of rain was in the forecast, so some attendees were worried that the parade might be cancelled, but the clouds opened up just in time for the start of the festivities. After an the official ‘it’s on,’ from Town Supervisor Robert Greenstein, all systems were GO!

The Victory Corners Ceremony kicked off the parade at around 10:45 a.m. from the corner of Ridgewood Terrace and Bedford Road, with the Marshal calling the attendees to attention followed by the Reverend Dr. Larry Holland’s opening prayer. The Presentation of Wreath was next, as Holly Hulme and Charlotte LePage of Girl Scout Troop 2576 came to the podium. The ceremony closed with the playing of “Taps” by the Horace Greeley High School Bugler, along with one final appearance by Reverend Holland for the closing prayer.

Following the closing of the Victory Corners ceremony, the line of March was set and ready to begin its trek down King Street and into the heart of Chappaqua. The question of whether or not the Clintons would be in attendance had been answered earlier when the Clintons emerged from their limousine for their traditional meet up with the town board and greeting of avid fans and long time supporters, all pre March, so as not to upset the parade schedule. The Secret Service and New Castle Police Officers directed the parade past the Chappaqua Fire Department and onto King Street, with former President Clinton–former Secretary of State Hillary Clinton-Governor Andrew Cuomo, and State Assemblyman David Buchwald, Town Supervisor Robert Greenstein and members of the Town Board strolling close behind. 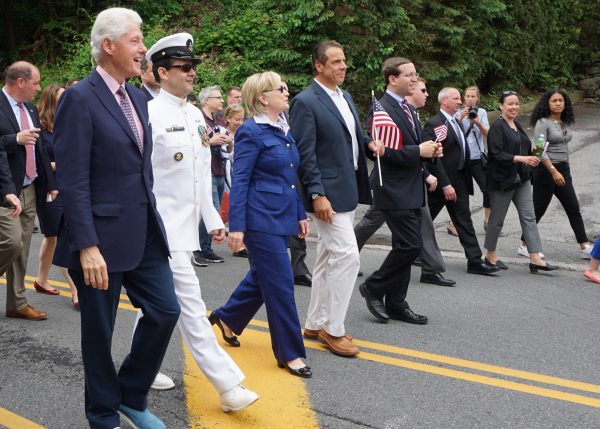 The parade moved through the middle of town to the delight of everyone along the way, with Iphones and cameras ready to support the marchers in every category, whether they were Brownie Troops, our First Responders, or the Clintons, all along the route leading to the Chappaqua Train Station, its final stop.

Captain James P. McCauley Jr., a Vietnam veteran, called the parade to attention for the Memorial Plaza Ceremony. Right around noon, the sizeable crowd, still well into the hundreds or more gathered around the Memorial at the Chappaqua train station, where a small podium was set up, along with a few chairs for the parade’s esteemed guests and veterans. Invocation would follow with the help of Reverend Dr. Martha Jacobs from the First Congregational Church, and Rabbi Jonathan Jaffe, along with the recognition or local Iraqi, Afghanistan campaign veterans and Gold Star Mothers.

The students of Horace Greeley High School took to the podium next, as they flawlessly performed the “Star Spangled Banner” and “America the Beautiful,” with the crowd singing along to the anthems. Three readings followed the songs, each of which an oral history of a New Castle veteran who had passed. Kaitlyn Zezzee, granddaughter of Korean War veteran and Silver Star recipient Francis M. Murphy, recited the first reading regarding her grandfather.

“Frank’s lessons on courage, confidence, and compassion still resonate with us to this day”, read Zezzee. “A brave soldier until his final days, he was a shining example of a proud and true American.” Francis passed away on January 6th, 2012.

Meaghan Townsend, from Girl Scout Troop 1023, did the second reading on World War II veteran Robert L. Sheddon. “Robert received the Purple Heart and Air Medal for his service”, recited Townsend. “And yet, as richly deserved as these honors are, they cannot fully do him justice.” Robert died on January 22nd, 1943.

Finally, Max Auerbacher, from Boy Scout Troop 2, read the last Oral History. This third and final reading was in honor of World War II Veteran Andre Whelan. “His Commanding Officer said Andy had been a very good soldier, and had the respect and friendship of all the men under him”, recited Auerbacher. “Andre Whelan was awarded the Purple Heart for his service, and his name is listed on the New Castle Veterans Memorial here at the Chappaqua Train Station.

Kevin Moore and the Kerry Pipers followed the readings with their rendition of “Amazing Grace,” which acted as an opening for the traditional Honor Roll of names that were added to the Memorial at the train station.

To conclude the festivities, Holly Hulme and Charlotte LePage reconvened for one final Presentation of Wreath and the 5th New York Regiment—Revolutionary War Squad, executed the Musket Volley. It was at this point, after one final rendition of “Taps”, that the Marshal brought the parade back to attention to conclude the ceremony. This marked the end of what was another wildly successful and fun Memorial Day Parade here in Chappaqua. 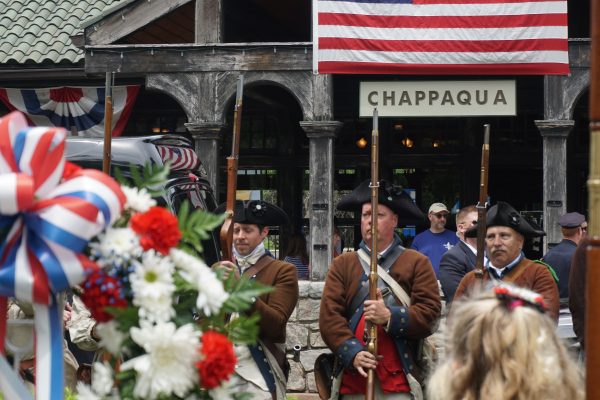