“I know conventional wisdom says the gun lobby is unbeatable, but that’s just not true. Despite what the gun lobby wants us to believe, the vast majority of Americans support reasonable measures.” — Secretary Hillary Rodham Clinton

“It’s terrifying to think how anyone, and how easily a terrorist, can get a gun in this city. We are going to bring universal background checks to the floor of the Senate, and with your help, we can win this fight.” Senator Chuck Schumer 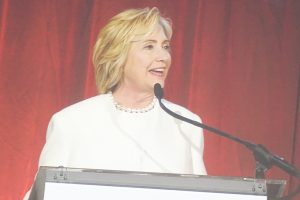 Could the pendulum finally be swinging in favor of passing major new gun violence prevention laws? Words of optimism and encouragement by Brady Center honorees Sec. Clinton and Sen. Chuck Schumer, and from Governor Andrew Cuomo, along with Brady campaign president Dan Gross, suggested that major change again could indeed finally be in the cards.

Key to such efforts are raising funds to keep up the pressure. Toward that end, some 450 guests were registered for the $1,000 a plate gala evening of the annual Brady Bear Awards at Ciprianis of Wall Street–and an animated auction (one dinner date with Paul Rudd went for $6,000) along with matching corporate sponsorships (an anonymous corporate donor promised a $250,000 matching grant to additional funds raised) together with prominent full page journal sponsors, such as Barbara Streisand and Michael Douglas, made for a successful fundraising eve. 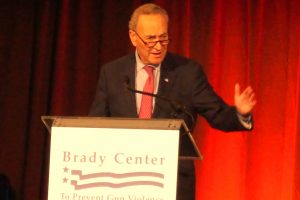 #Enough was the hashtag for an evening defined by both elegance–with various celebrity guests lending star support — and everyone treated to recording star Ingrid Michaelson’s poignant hit, Take Me as I Am–and the speakers’ defiant eloquence.

“The Tipping Point” was the all-important message.

And no small point … “It is the victims of gun violence who are making a great impact too,” noted Clinton. “There is no voice more eloquent than someone who has lost a child … there are so many senseless heartbreaking stories.” One such individual who spoke was Farid Naib, who lost his son Cayman to suicide from a gun in their home. “Guns in the home with children and young teenagers don’t mix,” Naib said, describing the heartbreak as unbearable.

“It’s long past time to say “enough”…enough talk, enough delay…it’s time to act,” said Clinton. “I know I’m preaching to the choir, but please, don’t give in to frustration, disappointment, or just giving up,” she said. “The politics are hard…but we can do this and deliver what will keep Americans safe.” Clinton added that she backs a proposal to stop people from a “no fly list” from buying guns in the U.S. “That’s just common sense.”

“The NRA was against us every step of the way,” Schumer later commented. “The NRA is still at it but they don’t frighten us anymore.” He addressed the gun show loophole, that the NRA “managed to slide into prior legislation,” noting that 40 percent of guns used in crimes are purchased at gun shows. 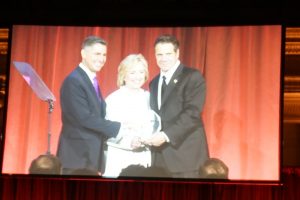 “We don’t care if you are red, blue or purple. If you don’t do right by the American people, we will hold you accountable,” offered Dan Gross, president of the Brady Campaign to End Gun Violence before introducing Governor Andrew Cuomo to present the inaugural Mario M. Cuomo Visionary Award to Sec. Clinton. Senator Schumer received the annual Jim and Sarah Brady Award.

“Celebrities and influences are speaking out everywhere,” Gross said, citing Kim Kardashian’s anti-gun violence tweet reaching 25 million followers as but one example. “In 2015, gun violence has emerged as a central issue in candidate debates, he said. “It was untouchable four years ago…”

Gross said Brady Center staff would be relentless in its efforts. “We don’t care if you are red, blue or purple. If you don’t do right by the American people, we will hold you accountable.” 93% of the American public supports expanding background checks. “It’s easier for the gun lobby to bully a small number of politicians than it is for them to bully millions of Americans.”

Another major focus of the Brady campaign is weeding out “Bad Apple” gun dealers (those who break background check laws, effectively “flooding the city and streets with guns” into the wrong hands); historic lawsuits are underway “to make them pay for putting profits over people’s lives.”

In an interview with The Inside Press preceding the award, Gross called it “terrifying to think how anybody, from a convicted felon to a person on a terrorist watch list can walk into a gun show and buy a gun, with no background check.”

He said the award to Clinton was an easy decision: “I have been deeply admiring her lead on this issue for years.”

Via news release from the Brady Campaign:

“Throughout her career as a public servant, Hillary Clinton has repeatedly put the safety of the American people above the influence and interests of the corporate gun lobby. She serves as an example for all policymakers who truly want to serve the constituencies they are elected to represent. Mrs. Clinton was there when the historic Brady Law was signed by President Bill Clinton and she has demonstrated a clear commitment in support of our efforts to ‘finish the job’ and expand those lifesaving Brady background checks to all gun sales.”

The Brady Center “Bear Awards” are named for Jim “Bear” Brady, who sustained a gunshot wound to the head during an assassination attempt on President Ronald Reagan in 1981, and his wife, Sarah, who worked side by side with Jim to pass the landmark Brady Handgun Violence Prevention Act of 1993, more commonly known as the “Brady Law.” 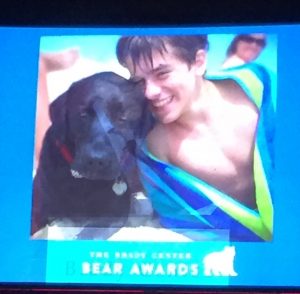 The Brady Center “Bear Awards” honor the efforts of individuals who have distinguished themselves in their dedication to Sarah and Jim’s vision of a nation without gun violence and who embody their remarkable spirit, strength and perseverance, to the extent that anyone else can!