For over 20 years, a smiling face, a helping hand, a high-five for preschoolers. Kind, sweet, friendly, and unassuming. And then, simply for being in the wrong place at the wrong time, he was gone.

On November 16, the Bet Torah community received the heartbreaking and devastating news that their longtime and beloved custodian Armando Rojas lost his final appeal for asylum with his case returned to the Department of Homeland Security “for removal of the alien.” As Rabbi Aaron Brusso stated in his email to the congregation, “Armando Rojas is father of Ulises and Armando Jr. He is husband to Silvia. He is a member of our synagogue family. He is a human being with hopes, dreams, loves and a track record of gentleness and kindness. What he isn’t is an ‘alien.’” 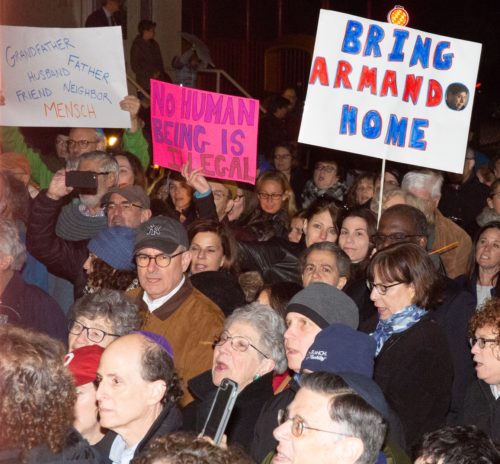 On the evening of October 16, in advance of his final asylum hearing, the Bet Torah and local communities gathered on the synagogue steps in Mount Kisco to rally in support of Armando, suddenly deported earlier this year following a mistaken arrest. Preschoolers to retirees, as well as local clergy, community leaders,  and Armando’s sons Armando Jr. (26) and Ulises (15), spoke of Armando’s contributions, presence and being part of the Bet Torah family, which sang, with love, “Bring Armando Home.”

A New Home, A New Life

Armando entered the United States from Mexico over 30 years ago at the age of 18, crossing without inspection, to escape dangerous circumstances and gang violence and seek a better, safer life, according to Rabbi Brusso. With little Immigration and Naturalization Service interior enforcement at that time, he was permitted to apply for and receive a social security number. Armando was hired as a custodian by Bet Torah, where he worked for over two decades, becoming more than a valued employee; he was a member of the synagogue family, knowing almost every member–certainly every child–by name.

Armando had also married an American citizen and had two sons, creating a life in the New York suburbs, reporting to work–sometimes seemingly seven days a week – and dutifully paying taxes and social security. In other words, a model “citizen” and role model for not only his own sons, but for the young children of Bet Torah whose paths he crossed daily.

In February 2018, Armando was celebrating with family at a Westchester restaurant when a fight broke out nearby and the police called. Likely because of his ethnicity, he was arrested along with others; Armando was quickly exonerated and released, but the arrest record was forwarded to Immigration and Customs Enforcement (“ICE”), which identified him as a fugitive for not appearing at an immigration hearing over 25 years ago. Armando was detained without notice and promptly dropped over the Mexican border without identification, money or a cell phone, despite a superseding stay of deportation. He made his way to family in Mexico City, but once there received threatening phone calls from groups responsible for murdering family members long ago.

A Roller Coaster of Emotion

The Bet Torah staff and congregation quickly sprung into action to facilitate Armando’s return. Qualified immigration counsel was retained, a GoFundMe has raised over $40,000 to date, and his wife, sons and new grandson were assured that they would be supported throughout the efforts to have Armando granted asylum on the basis of “credible fear” upon deportation and brought home.

In June, Rabbi Brusso, together with Armando Jr. and congregants Linda Dishner and Mike Kraus, flew to Mexico and escorted Armando to the U.S. border to request asylum; a video (see link below) of the walk to the checkpoint, along with interviews of Armando, his son and the rabbi, was shared widely on social media and via Rabbi Brusso’s moving article in The Forward. Armando was accepted into ICE custody after a second attempt, first placed in detention in Arizona and then moved to an Albany County Prison wing for asylum seekers.

In early October, in discussions with Armando’s attorney, the hearing officer seemed to indicate that Armando had a strong “credible fear” claim for asylum, even under recently narrowed definitions promulgated by the U.S. Attorney General’s office, because of “participation of government actors – in the form of local law enforcement–with gang violence,” according to Rabbi Brusso; Armando had told ICE that local authorities allowed gangs to freely function. However, his claim for asylum was rejected without explanation, with one remaining appeal before an immigration judge before re-deportation.

After consultation with Armando’s attorney and family, the decision was made to further publicize his plight to appeal to someone in the administration (beyond the many local and state politicians already involved) who might be able to help. Congregants and members of the wider community were urged to write directly to and petition the immigration judges, and almost 250 people attended the evening rally, covered by numerous New York area media outlets alerted to the event by congregants with public relations backgrounds and contacts.

Rabbi Brusso described the effort as a way to “come together to create a positive space, for positive, constructive actions around these issues without the rhetoric of ‘you’re wrong and I’m right,’” he added. “We can talk about the issues, and our values, from there. It’s important to show people that there’s a caring, nurturing place as real as the destructive place.” He said the rally offered an opportunity for the congregation and others to come together communally to express its loss, much as it does to celebrate happy events and mourn sad ones. “When Ulises said ‘I didn’t realize how many people loved my dad,’ it made it all worth it,” he said. 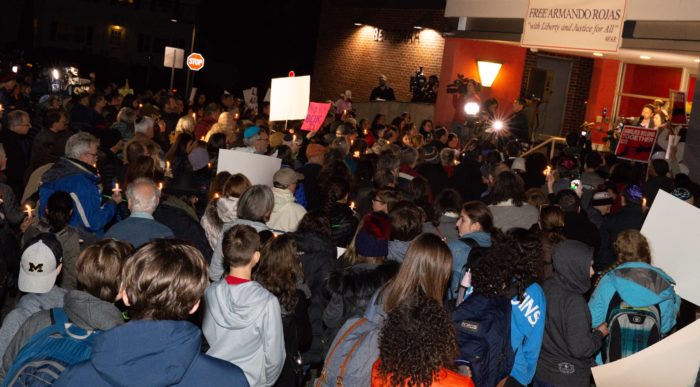 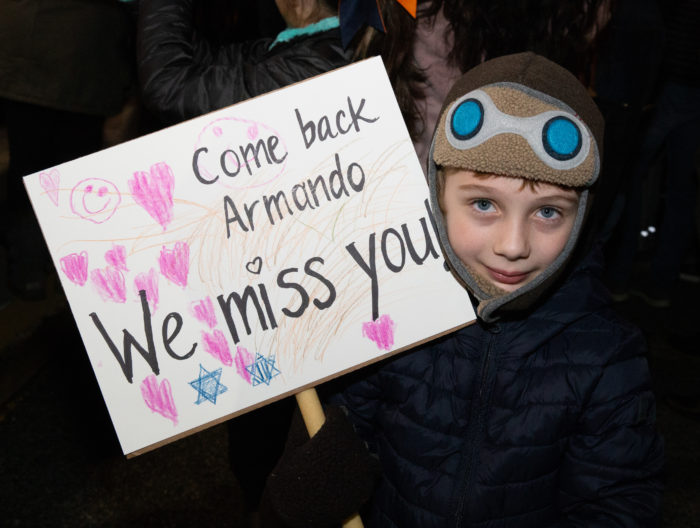 A Lesson in Compassion

“Bring Armando Home” also became a teaching opportunity for Bet Torah children, many too young to understand issues surrounding legal citizenship and immigration but able to develop compassion for someone they know. An email to the synagogue nursery and religious school communities, shared on Facebook, reminded them that “we are here for each other no matter what we are going through.” Rabbi Brusso addressed children directly at the rally, gently urging them not to be scared that their own parents would be taken away, but suggesting that “this imaginary fear teaches you to be sensitive to the real fears faced by others” and this “moral fear” teaches you how to be compassionate.

“I wanted to create a moral space that doesn’t exist elsewhere,” Rabbi Brusso explained, “to take it out of the political and make it focus on the personal.” He added that houses of worship are really the last places where people with diverse points of view, outside of their social media echo chambers, can gather and come together for a larger purpose without using the language built for argumentation often used in public discourse.

Rabbi Brusso is unsure of what the next steps may be, but spoke for all present on October 16: “Some of us are lucky enough to be born into wonderful homes, others have to search for them. Armando went on a journey to find his home. He found it here. And he is a blessing to his wife and his sons and to our entire community. We ask one thing: bring Armando home so that he can continue be a blessing to all of us again. Let’s bring Armando home.”