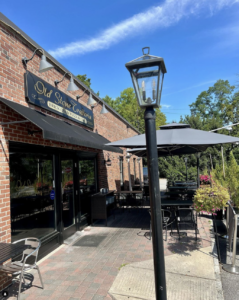 Old Stone Trattoria has been a staple of the community for over a decade, thanks in no small part to the hard work of owner Angelo Tradito. If Old Stone’s customers had to have one complaint about him or the restaurant, it’s that his Chappaqua hotspot is only open six days a week! From their specialties Chicken Scarpiello and their homemade Fusilli to the perennial crowd favorite Chicken Parmesan, it can be difficult to keep ingredients on the shelf. That’s fine with Tradito because the fresh ingredients are part of the secret to Old Stone Trattoria’s success. “It’s fresh ingredients and love,” said Tradito. It’s hard to think of a better recipe than that.

When you first sit down, you are greeted by a basket of warm bread and a delicious tomato and olive oil dip. There is an excellent assortment of additional appetizers as well, such as the Black Truffle Burra. The only thing to keep in mind is to not fill up before the entrees! Old Stone is famous for their pizza, but their entrees are not to be overlooked. The Penne Ala Old Stone is an excellent choice for patrons of all ages. Kids love the creamy pink sauce that’s reminiscent of a vodka sauce, and the parents love the pancetta and mushrooms that really sends it over the edge. 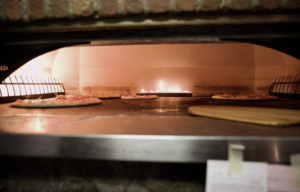 All the recipes were handed down from Tradito’s parents, who ran a restaurant themselves where Tradito served as head chef for many years. Good food runs deep in the family. They immigrated to the United States from Italy when Tradito was five and have honored their roots ever since. Old Stone’s food is prepared in a traditional Sicilian style. Their Chicken Parmesan and their Eggplant Parmesan, for instance, eschew the typical breadcrumb method for a lighter egg wash and flour treatment. That might be part of the reason why they go through four pounds of eggplant a week according to Traditio. Speaking of vegetables, a side order of the Broccoli Rabe is an absolute must! And if you want more, the Broccoli Rabe and Sausage Pasta is an incredible choice for an entree.

Not only does Old Stone have great food, they have a great staff as well. Every employee works hard to make sure you have a wonderful meal. This all comes back to passion that Tradito displays. “I love getting to know the customer and I love the customer getting to know us,” he said. Tradito knows many customers on a first name basis, including Bill Clinton, who can be spotted picking up takeout from Old Stone Trattoria just like every other Chappaqua resident. But Old Stone Trattoria doesn’t care who you are. You’ll still be greeted with a warm smile and great food no matter what. “When I step inside, it’s like I’m home,” said Tradito. It shows. When you eat at Old Stone Trattoria, you’re in Tradito’s house, tasting his food that was passed down from his parents. You’re one of the family. 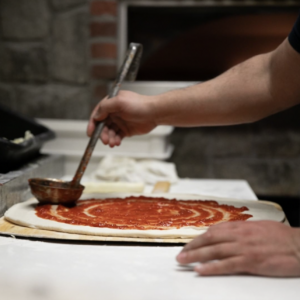 The history of Old Stone Trattoria reads like a movie script. Tradito had lived in Chappaqua for years before opening up Old Stone, but had since moved away. One day, he was paying a visit to his old stomping grounds when he stumbled upon a vacant building that just spoke to him. As luck would have it, the realtor was hanging a for lease sign just as Tradito was making his way over to get a better look, and the rest was history. Old Stone celebrated its 12-year anniversary in September, and there are no signs of slowing down.

Old Stone Trattoria is open for dine-in and takeout services from Tuesday through Sunday at 425 King Street in Chappaqua. If dining in, it is recommended to make a reservation.