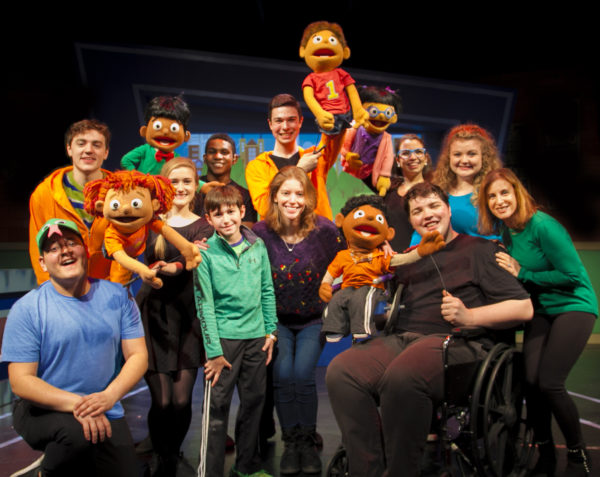 “I actually sang before I spoke,” reminisces 29-year old former Windmill resident Bonnie Gleicher, who wrote the music and lyrics for the children’s off-Broadway show Addy and Uno currently playing at The Kirk Theater on West 42nd Street. The family musical featuring a colorful cast of characters represented by puppets touches on themes such as disability, kindness, bullying and friendship.

One of the main characters “Uno”, a math whiz, is entered in a math competition but fears being on stage due to his autism. But his friends with other disabilities ranging from ADHD to mobile impairment help him overcome taunting from the school bullies and ultimately succeed in the end. There are themes any grade schooler can relate to resulting in a heartfelt musical with soaring tunes that is sure to leave audience members smiling and cheering for “Uno.”

A Love for Theater at an Early Age

Music was a big part of Gleicher’s life from a young age. She recalls as a toddler prancing around her house, pretending to be “Ariel” from The Little Mermaid. As an elementary school student in Armonk, Gleicher landed the lead roles in both Peter Pan and The Wiz of Oz.  She soon yearned to audition for roles in the city and the talented Gleicher was cast as the orphan “Kate” and the understudy for Annie in the Broadway national tour of Annie as a 10-year old and then as “Young Jane” in the Broadway musical Jane Eyre when she was 12.

Gleicher is thankful for her supportive parents, Teri and Kenny Gleicher, who still live in Windmill and helped her achieve her dreams. “Growing up, my mom drove me in and out of the city along the West Side Highway to audition and perform in New York. She never pushed me to do any of this. She basically saw I was living my dream and sacrificed a lot by touring the country with me in Annie for eight months while my dad and grandmother helped raise my sister. “

Gleicher took a hiatus in high school from performing in the city and instead focused on her schoolwork while continuing to take piano lessons at home. “It basically took two years until my piano teacher told my parents that they were wasting their money,” Gleicher says with a chuckle.

Instead of practicing Chopin, Gleicher was writing songs. She stopped piano and began to focus on songwriting more seriously. She still did a few talent shows and open mic nights at Byram Hills High School but stayed out of the limelight.  Gleicher recalls how her social studies teacher Matt Allen was always supportive of her and they still keep in touch today.

And go places she did. A journalism student and Phil Beta Kappa graduate of the University of Wisconsin at Madison, Gleicher was lucky enough to have one of her demos heard by an executive at Decca Records as an undergraduate. “He told me this all sounds great to me, but I hear theater in it.” It was a defining moment for Gleicher.  “I thought to myself, oh my God. That makes so much sense. That brings everything that I’ve ever done together.” And so Gleicher wrote her first full-length musical in her senior year of college and has continued writing ever since.

The Addy and Uno show was conceptualized by Dr. Nava R. Stilton, a developmental psychologist who wrote the Realabilities Educational Comic Book Series. The series was developed so that individuals with disabilities can see themselves represented positively on-screen, and typical children and adults can become increasingly knowledgeable, sensitive and interested in their peers with disabilities. Gleicher met Stilton through a mutual friend and Gleicher was so excited about it that she knew she had to write the music and lyrics.

Gleicher describes the writing process as “euphoric” and “seeing the impact the show has had on audiences is incredible. While writing the music, I knew it had to feel fun and playful and comical, while revealing the characters’ disabilities in a way that was sensitive and touching.” The day after meeting Dr. Stilton she wrote Uno’s anthem “Brave” and was able to complete all the music within a month.

The show was first performed at the 14 Street Y downtown and then went to Off-Broadway within a year and a half which is a very short timeframe, notes Gleicher. Most shows take 5-7 years until they come to fruition. Gleicher credits the producing team of Tom and Michael D’Angora of making the show more interactive and improving the dialogue before the production moved to off-Broadway.

The Future for Gleicher

Up next, Gleicher is writing an original family musical called Little Things. Gleicher who previously lived above a children’s playground in the city, used to love listening to the children at recess. “It is such a beautiful sound and I thought how can I capture that in a musical. It’s about children tasting freedom and going up against a tyrranical principal.” The show is currently being produced by the New York Theatre Barn and NYU Tisch’s Graduate Musical Theatre Writing program.

Addy and Uno will be performed at Gleicher’s alma mater Wampus Elementary School on May 15 and Gleicher will be in attendance. So what would Gleicher say to any aspiring songwriters or thespians in the audience? “If you love what you do, you believe it’s your purpose, and your intentions are pure, you will live your dreams.”