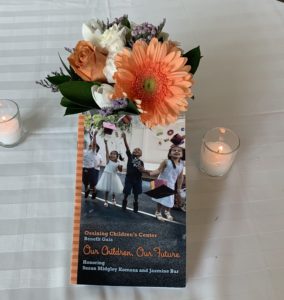 Tarrytown, NY — When Susan Midgley Komosa, Ossining Children’s Center (OCC) board president, accepted the Center’s Visionary Leader Award, she said that there was one message she wished to leave with attendees of the lively and heartwarming ‘Our Children, Our Future’ spring benefit gala on May 19: “The importance of saying yes.” 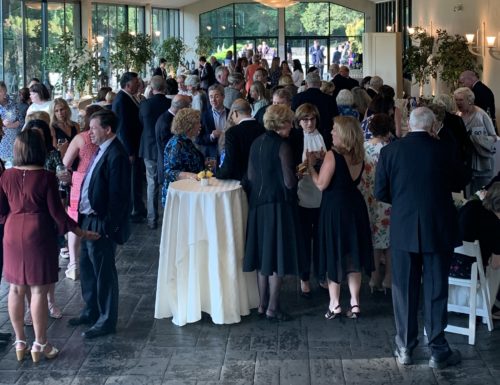 “Whatever form your yes takes, it does make a difference,” she told those gathered inside the stately Tappan Hill Mansion to support OCC child care scholarships and future fundraising initiatives.

Susan, to her own credit, “stepped up to leading the board just when we needed her most,” said OCC executive director Howard Milbert, describing Susan’s consensus-building that over three years helped OCC move forward with funding and planning a new and larger facility “specifically designed for our childcare and education programs,” after a new site at 32 State Street was gifted to OCC by Art and Becky Samberg. Susan, he said, “kept every board member engaged and informed… she gives everyone a voice…” The ‘yes’ Susan spoke of was in ample supply at the gala, too. Angel donors matched money pledged by generous gala goers for childcare scholarships. A record $106,000 was pledged during an animated, pre-dinner ‘auction’ led by Vanessa Pairis, OCC board member.

Before the auction, OCC ‘parent’ Deepti Sharma relayed how OCC helped both she and her son thrive in his early childhood years beginning at age two, with vital, quality after school care where he learned English, formed friendships and gained valuable life skills. Eight years later, she described her son as “a good, kind person,” and said, “I would have peace of mind and could concentrate on my job.” Thanks to OCC too, she added, “I have become a better parent and provider for my family.”

Saying yes might well be second nature to the recipient of the Young Leader’s Award, Jasmine Bar, whose ‘truly remarkable efforts,’ said OCC’s Director of Development Shawn Cribari, became the ‘blueprint’ for what turned into five years of ‘Dancing for the Children,’ and its always “financial and artistic success.” Dancing for the Children has raised over $20,000 since Jasmine launched the first event with her then five-member team. “Can you imagine at age 16 creating what has become a philanthropic legacy?” Shawn said of Jasmine, who graciously accepted a gorgeous plaque, hand painted by her aunt, Aggie Shah, owner, A Maze in Pottery in Briarcliff.

Not hard to imagine at OCC, where, as Susan pointed out too, “my fellow board members excel at saying yes.” Prior to dinner, campaign co-chair Marilyn Wishnie, together with Natalie Gorlin, building co-chair, presented “Special Report: The Rumors are True,” which included detailed visual renditions of the plans for OCC’s future headquarters at 32 State Street.

A capital campaign, which has already raised $13 million toward a $17.8 million goal, aims to continue its work to fund the new facility. In the meantime, the staff and volunteers of OCC aim for ever more expressions of ‘yes.’