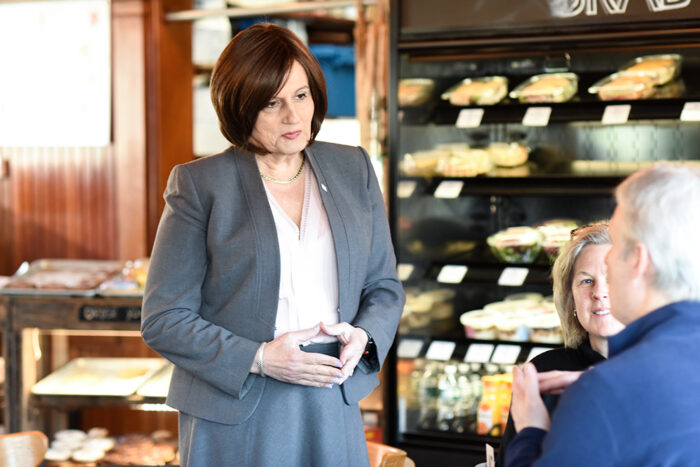 While Kristen Browde has the backing of the New Castle Democratic committee, she is running against a crowded field for David Buchwald’s 93rd Assembly seat.

“White Plains seems to be coalescing around Jeremiah, and they certainly have a lot of votes,” Jane Silverman, co-chair of the New Castle Democratic Committee, says. “Women and the LGBTQ groups are really behind Kristen. So right now, I don’t necessarily think there is a frontrunner.”

In 2017, Browde challenged New Castle Supervisor Rob Greenstein for his seat, lost but still garnered 47% of the vote in the heated race. The contest was closer than some expected, according to Silverman.

Silverman points to Browde’s work for the New Castle Democrats as well as her work on Governor Andrew Cuomo’s Love Makes a Family council to legalize gestational surrogacy and her experience as a trustee for the $2.5 billion AFTRA Pension Fund.

Kristen is a force to be reckoned with,” Silverman says. “When she wants to get something done, she will get it done.”

Tim James, chair of the White Plains Democratic City Committee, says he thinks Frei-Pearson is the favorite. But he acknowledges that without polling there is little information to go by. He touts Frei-Pearson’s service on the city Democratic Committee as well as his law practice.

Burdick, meanwhile, has the support of the Bedford, Mount Kisco, and North Castle Democratic committees. He was elected supervisor in 2013 after serving on the town board.

Browde has thus far trailed in fundraising having raised just under $18,000, according to public records, while Burdick has raised more than $66,500 in the same period. Frei-Pearson’s fundraising totaled more than $163,500 including a $150,000 contribution to his own campaign.

Though the primary is sure to be a battle, the nominee will be favored to win the general election. The seat has been in Democratic hands for all but three years since 1993. The only Republican elected to represent the district over this period was Robert Castelli, who won a special election in 2010 and was re-elected later that year in a Republican wave election. For every registered Republican or Conservative, there are roughly 1.6 Democrats among active voters in the district.

As of press time, North Castle resident Sarmad Khojasteh, a partner at Kasowitz Benson Torres, confirmed that he was being considered as a possible candidate on a Republican ticket. Khojasteh, who serves on the Town of North Castle Assessment Review Board and on the Iranian American Bar Association’s New York Chapter Board of Directors, entered the race for the 37th Senate District in 2018 before dropping out and endorsing GOP nominee Julie Killian.