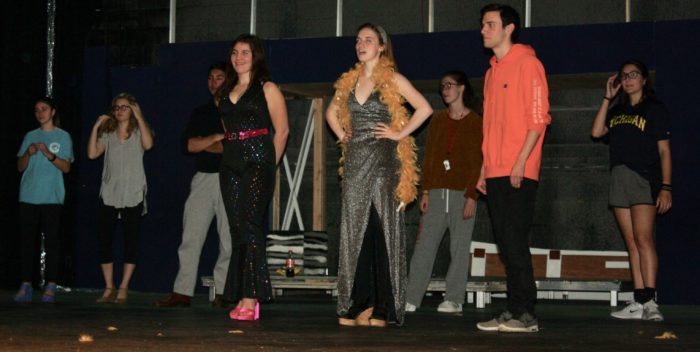 The year is 1979 and the hippest floating discotheque and casino is about to open.  It’s not too late to get on board.  But be careful, because earthquakes, tidal waves and burning infernos await.  You might have to help save a reporter and her long-lost boyfriend, a nightclub singer and her young twins, a greedy businessman, a nun with a secret, a singer that’s hit the skids and a scientist that just might be able to rescue us all.  Plus, there’s romance, intrigue, sharks, rats and more than a hundred other guests on board.

This is “DISASTER” a hilarious homage to the 70’s complete with bell bottoms, feathered hair and the music of a generation.  You’ll be dancing in the aisles to classics like “Knock on Wood,” “I Will Survive,” “I Am Woman” and “Never Can Say Goodbye.”  Director Lee Kasper tells us “I love all of the music in Disaster! Moment to moment, each song is one that the audience will love to hear and will be excited to learn how it has been contextualized for the show.”

Cast member Katie Katz tells us “We are all so excited to be a part of this and the audience will love to hear these classic songs delivered in a whole new way.”  Violet Gautreau portrays Jackie the nightclub singer and told us “She loves the opportunity to do something she loves with the entire class.”  And John Admunsen, who portrays Chad added “it’s great to part of this community and it has been a joy to spend time with the senior class throughout the rehearsal process.”

Cast member Ashleigh Wachtfogel said, “Disaster is fun and upbeat, and everyone will really get into the music, especially our parents.”  And nightclub owner Chase Sullivan says, “The show is crazy, unexpected entertainment.”  Get ready to bring back all those 70’s dance moves as well.  Choreographer Jesse Pellegrino tells us, “he loves the 70’s vibe and teaching the kids to embrace the style of dance, which was new to all of them, was a blast.”

Since auditions the cast and crew of this show have had to deal with many real Disasters such as nor’easters, canceled rehearsals, no power, closed roads and St. Patrick’s Day.  But we survived.  Will you?