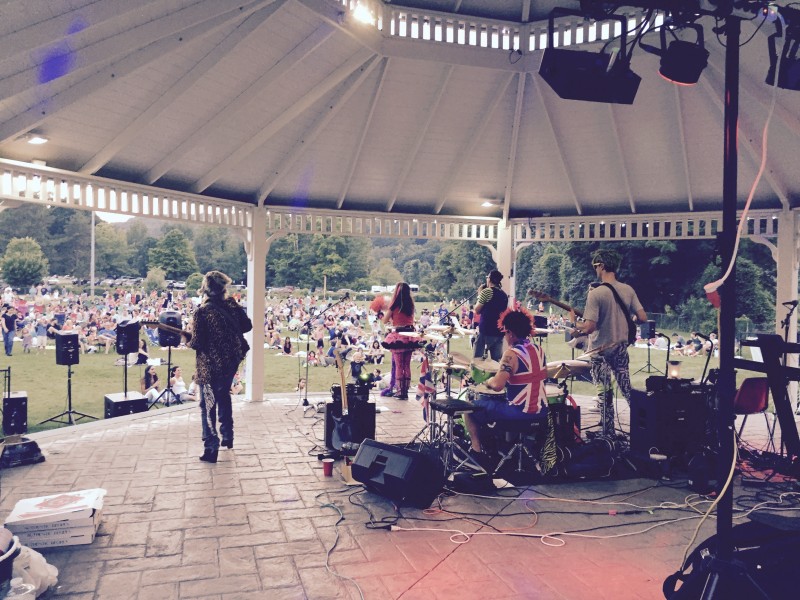 Article and Photos by Matt Smith

As Jimmy McFly shreds a chord on the guitar, lead vocalist Beckie Gibson flips back her bangin’ teased-and-dyed-pink hair and throws up a peace sign. “Hello, Chappaqua!” she screams into the mic. “Are you ready to go back in time to the days where big hair ruled, stonewashed denim made you look so cool, and ‘milk did a body good?’” She steps back and takes a breath, while the crowd cheers in response. “We’re about to take you back in time, ‘Back to the Future,’ back to the baddest, most totally awesome decade… the 1980s!!”

And thus began the showcase of The Ronald Reagans Big ‘80s Show, the last of four weekly concerts held on Rec Field during the month of July, as part of Chappaqua’s 2015 Summer Concert Series, sponsored by Breezemont Day Camp and the New Castle Recreation and Parks Department. 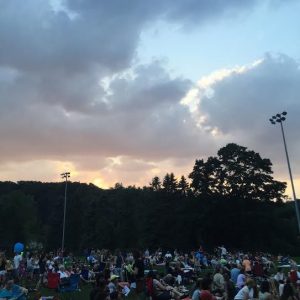 Throughout the night, the “bodaciously awesome” band, whose show came complete with 80s wigs, glow necklaces, and a smoke machine, offered up such favorites as “Material Girl,” “Any Way You Want It,” “Hit Me With Your Best Shot,” and more of the decade’s best.

“[The concert] was a blast!” said Gibson, of performing. “Hundreds of people came out and the Chappaqua crowd was lively as they cheered and danced all night.”

And “hundreds” would probably be an understatement. Returning fans came out in droves to take in the nostalgic throwback event, and it’s clear they weren’t disappointed. “It’s great entertainment,” said one concertgoer. “We come out every year. We love it.” Added another: “It’s nice to get together with friends, sit under the stars, and enjoy the music.” Yet another commented she used the annual occasion’s laid-back environment to “unwind after work.”

The evening also brought out a fair share of newcomers. “It’s the first one we’ve gone to, ever,” shared one patron. “It’s pretty great. We’ll have to come again.” Regarding the attendance as a whole, “the turnout was better than we thought,” commented Dawn Greenberg, Executive Director of the Chamber of Commerce, who spearheaded the evening.

It was an especially great night for the younger attendees, who had an extra reason to be giddy; in addition to the music offerings, Wednesday’s event served as “Kid’s Night,” and sponsors galore led several ancillary activities. Of note, Making Headway Foundation, the Chappaqua-based organization that raises money and awareness for children with brain and spinal cord tumors, gave guests the opportunity to dunk its employees, for a $5 donation to their cause. 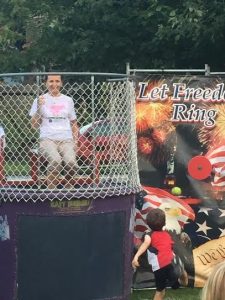 “We’re especially touched to learn that [the] event supported a wonderful charity,” said Gibson, on the subject. “We think the students who spoke in front of the crowd are the true rock stars.”

All the same, the band put on a truly fantastic show, and fans agreed, as they have all month long; past concerts this year — featuring The Don DuPont Big Band, The Chappaqua Orchestra, and Concert Series regular, the Bruce Springsteen tribute band Tramps Like Us — have attracted similarly high numbers of residents and town members. And why do so many people come out for this event? The answer is quite simple, according to one guest: “It’s just fabulous. One of the highlights of the summer in town.”

After witnessing Wednesday night’s ‘80s extravaganza, we couldn’t agree more. And it’s all thanks to the house band of the evening, the Ronald Reagans. You put on a bangin’, rockin’, totally awesome show, guys. We won’t “stop believin’” you’ll be back next summer.