The Chappaqua spike of COVID-19 cases linked to a high school graduation ceremony “has run its course,” according to Westchester County Executive George Latimer.

It has been over three weeks now since the recent outbreak of COVID-19 cases attached to the cluster event. The activities that provoked the spread had included Horace Greeley High School’s drive-in and “field event,” which both had limited social distancing and minimal mask protection. There have been 27 positive cases that were tied back to the incident which occurred on June 20. Of the 27 cases, 21 were reported in Chappaqua residents, three in Mount Kisco, two in Bedford, and one in Pleasantville. 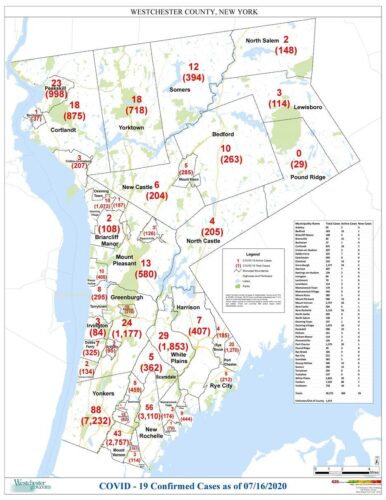 During his weekly COVID-19 briefing on Monday afternoon, Latimer noted the spreading may be gone for good. Believed to have “run its course,” Latimer proclaimed that none of the 27 individuals have been hospitalized or become severely ill. With zero fatalities associated with  the outbreak, Latimer says he’s “appreciative” it turned out this way. However, he also said he is not surprised.

“The mechanism that’s in place today is much greater than the mechanism we had in place when we were surprised by the first case we had back in March,” he explained, “We did not have the ability as a local entity to test for COVID-19. Now we have this cluster, and we have easily available COVID-19 tests. Anybody that had contact with a person who was initially infected could be tested quickly, and then impose isolation on those individuals who test positive and reduce the spread.”

More good news… According to Latimer, almost 1 out of every 3 people in the county have been tested since the outbreak began, and over 85% of those tests have come back negative. He also mentioned that in the past month, there have been more nights with no overnight COVID-19 fatalities than with at least one.

“If you track back to the peak weeks, we had nights of 35, 50, before spiking at 72 people dying overnight,” he said. “So when we have no overnight deaths, it’s an encouraging number. We’re much better off than we were over that period of time.”

Although the number of active COVID-19 cases in Westchester continues to oscillate slightly, he emphasized that things are steady in the right direction.

“Generally we continue a downward trend from where we were at our peak, but on any given day, depending on if we see a particular spike or unique situations, we could see a few more or less cases,” he said. “The vast majority of people have gone through the two-week incubation period, survived or did not get significantly sick, and obviously weren’t a fatality.”

“If we go up more than a few cases, then we know we’ve got to be able to address it,” he added. “The geographic distribution of the cases also matters. If we see an increased number of cases all over the county, that means we’re watching a broad-based trend, not just a spike.”

As of Monday, July 13, there have been 35,327 positive cases in Westchester since the pandemic hit in March–with 529 still active cases that have yet to be resolved.

As he concluded his rundown on COVID-19, the County Executive continued to bring positive news, conveying that Westchester is headed to a “new normal.” Over the last month and a half, two beaches have been opened, in Playland and Croton Point Park. There has also been the opening of four public pools, from White Plains to Mount Vernon. This past sunny weekend, around 7,200 people traveled to these cool waters of relief. He shared that it was done responsibly and in the safety of COVID-19 guidelines, sanitizing surfaces, encouraging social distancing, and requiring masks.

“We were able to provide things that were necessary and doable in order for people to start living their lives, and at the same time reduce the spread,” Latimer would explain.

Recently, there have been many other large gatherings further indicating that returning to regular everyday life is achievable–while still maintaining health and safety for the people. Latimer announced Bicycle Sunday has been reestablished in the last couple of months with over 1000 people attending. On the golf course, there were 8000 rounds of golf in the six public courses in Westchester County this weekend. Even camps at various nature centers have been sold out and operated smoothly, despite the heavy circumstances faced today.

“We have opened up some facilities in Westchester County and we’re getting good responses,” Latimer summarized, suggesting a bright future in reopening in the Westchester area lay ahead.

However, as the county continues to make great progress, the County Executive stressed that this is still not a time to be unmindful and relax. “We are not out of the woods. We’ve had success in New York State in general and Westchester County in specific, but this is an ongoing battle every single day. We are not in a position where we can be cocky or confident that tomorrow things won’t spike unless we continue to show intelligence and diligence.”

“The way to have the economy reopened is not just by a government reopening industries, but that people feel safe when they go back out into the public,” he concluded. “There is no other answer to it than self-discipline and making that sacrifice of wearing a mask. We’ve had some success here, and we hope we’ll continue to have that success given the numbers. That is the mission.”

Brian Zhang, a Byram Hills High School student, is an aspiring journalist, and summer intern for the Inside Press.