A brief look back at various events in Chappaqua and in Westchester surrounding Hillary’s historic run for the Democratic nomination…leading up to the New York primary.

A Visit to HGHS on the Campaign Trail 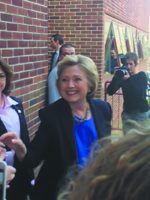 Hillary Clinton’s anticipated presence created such a buzz throughout the student body at Horace Greeley High School on Thursday, March 31, that it was tough to maintain the students’ focus and attention in class that day! But, can you blame them? It’s not every day that the former First Lady, Secretary of State, and current Democratic Presidential Candidate comes to their high school to speak in one of their social studies classes. It was a memory that I’m sure the students will never forget, as she walked through a maze of adoring students and teachers alike all craning necks to shake hands, share an encouraging anecdote of support, or snap a quick picture with their cell phones. –Timothy JH McHale (HGHS ’11, actor, and also substitute teacher in the Chappaqua Central School District)

“My Inspirer in Chief”…Kind Words of Support

“You are my inspirer-in-chief. You are that to many people in the United States and around the world.” Tracy Stein to Hillary Clinton preceding HRC’s talk to hundreds gathered at her home; an impromptu meeting with Clinton at Le Jardin du roi prompted Stein to pursue a Master’s degree in global affairs. “Human rights is my passion,” Stein noted. HRC opened her talk highlighting what’s at stake in November. “It really is one of these crossroads/consequential elections… it will set the stage for the next four to eight years–and probably for the next decade or two–in how we conduct ourselves as a nation, how we treat one another, what goals we set, how we lead and how we are viewed in the world.”

At SUNY: A Test for “Any Candidate”

An early stop on the New York campaign trail included a rousing speech to SUNY Purchase students, faculty and supporters county wide. HRC included, as she has in many speeches during this campaign,
her criteria for the presidency: “One, can you deliver results that actually improve people’s lives? Two, can you keep us safe? That may be more personal for New Yorkers than other folks…and people who don’t know how to talk about it, who view it as an afterthought, have no business being in the Oval Office. And three, can you bring our country together?…”

The early April grand opening of the Westchester for Hillary headquarters at 188 Martine Avenue in White Plains has spurred a great deal of momentum for signing up and volunteering.