A full gallery of Inside Press pictures from Hillary Clinton’s history making milestone are available via The Inside Chappaqua and Inside Armonk Magazine Facebook page with photo credits as noted. https://www.facebook.com/InsideChappaquaMagazine/photos/?tab=album&album_id=10154227307673669

Just Between Us: If I had to choose Tuesday night’s most poignant historically significant comments made by Hillary Clinton at the Brooklyn Navy Yard on the eve of her historic nomination, it would be how she connected becoming the first woman in U.S. history to clinch a nomination for a presidential run to the history of our struggles as women–and men, too. Her presidential run is #herstory, yes, but #ourstory too. 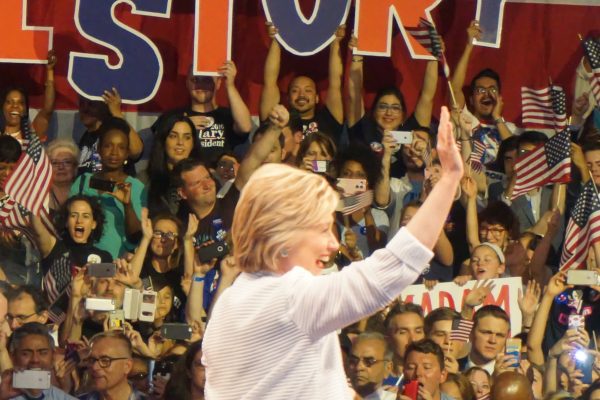 “Tonight’s victory is not about one person. It belongs to generations of women and men who struggled and sacrificed and made this moment possible. In our country, it started right here in New York, a place called Seneca Falls, in 1848. When a small but determined group of women, and men, came together with the idea that women deserved equal rights, and they set it forth in something called the Declaration of Sentiments, and it was the first time in human history that that kind of declaration occurred.” — Hillary Clinton

In addition, perhaps we won’t be hearing again the word “robotic” again or phrases like ‘lacks emotion’ in reference to Hillary Clinton. Pure myth by naysayers. From my vantage point, she seemed overcome at moments. What some call robotic, millions of others consider measured and thoughtful. — Grace 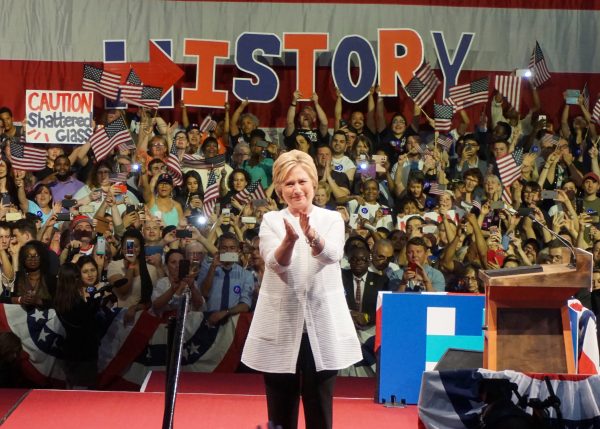 Photos by Grace Bennett for the Inside Press.

Commending Senator Sanders
“I want to congratulate Senator Sanders for the extraordinary campaign he has run. He has spent his long career in public service fighting for progressive causes and principles, and he’s excited millions of voters, especially young people. And let there be no mistake: Senator Sanders, his campaign, and the vigorous debate that we’ve had about how to raise incomes, reduce inequality, increase upward mobility have been very good for the Democratic Party and for America. We all want an economy with more opportunity and less inequality, where Wall Street can never wreck Main Street again. We all want a government that listens to the people, not the power brokers, which means getting unaccountable money out of politics. And we all want a society that is tolerant, inclusive, and fair.”

On Donald Trump
“Trump is temperamentally unfit to be president and commander-in-chief. And he’s not just trying to build a wall between America and Mexico – he’s trying to wall off Americans from each other. When he says, ‘Let’s make America great again,’ that is code for, ‘Let’s take America backwards.’”

“When Donald Trump says a distinguished judge born in Indiana can’t do his job because of his Mexican heritage – or he mocks a reporter with disabilities – or calls women ‘pigs’– it goes against everything we stand for. Because we want an America where everyone is treated with respect and where their work is valued. It’s clear that Donald Trump doesn’t believe we are stronger together. He has abused his primary opponents and their families, attacked the press for asking tough questions, denigrated Muslims and immigrants. He wants to win by stoking fear and rubbing salt in wounds. And reminding us daily just how great he is.

“To be great, we can’t be small. We have to be as big as the values that define America. And we are a big-hearted, fair-minded country. We teach our children that this is one nation under God, indivisible, with liberty and justice for all. Not just for people who look a certain way or worship a certain way or love a certain way. For all. Indivisible.”

Her Mother’s Influence
“We’re stronger when every family in every community knows they’re not on their own, because we are in this together. It really does ‘take a village’ to raise a child – and to build a stronger future for us all.”

“I learned this a long time ago, from the biggest influence in my life: my mother. She was my rock, from the day I was born till the day she left us. She overcame a childhood marked by abandonment and mistreatment, and somehow managed not to become bitter or broken. My mother believed that life is about serving others. And she taught me never to back down from a bully, which, it turns out, was pretty good advice.”

This past Saturday would have been her 97th birthday, because she was born on June 4th, 1919. And some of you may know the significance of that date. On the very day my mother was born in Chicago, Congress was passing the 19th Amendment to the Constitution. That amendment finally gave women the right to vote. And I really wish my mother could be here tonight. I wish she could see what a wonderful mother Chelsea has become, and could meet our beautiful granddaughter Charlotte. And of course, I wish she could see her daughter become the Democratic Party’s nominee for president of the United States.”

The New Chapter
“Now you are writing a new chapter of that story. This campaign is about making sure there are no ceilings – no limits – on any of us. And this is our moment to come together.

So please, join our campaign. Volunteer. Go to hillaryclinton.com. Contribute what you can. Text Join, J-O-I-N, to 4-7-2-4-6. Help us organize in all 50 states. Every phone call you make, every door you knock on will move us forward.