Chappaqua, NY – A first time and upcoming “Hillapalooza Weekend,” created by Chappaqua Friends of Hill (CFOH) and scheduled for August 6 and 7, is intended to be a “town-wide celebration of Hillary,” states CFOH founder and president Dawn Evans Greenberg.

“We decided to create Hillapalooza as a way to involve the community, especially families with children, in celebrating a historic and monumental day in our town’s history. Hillary is our second presidential nominee from Chappaqua–Horace Greeley was the first–and the first women ever, of course, so we think a town-wide celebration is in order to share the excitement, “ noted Dawn Evans Greenberg, the President of CFOH.

In just days, a group of ten CFOH supporters will in fact be representing the more than 540 CFOH members by attending the Democratic National Convention (DNC) in Philadelphia.  Recognizing that not everyone can go to the DNC, Hillapalooza weekend was formed as a way to involve all CFOH members and also help any Hillary Clinton supporter in town find ways to get involved or simply come out and show hometown support for Hillary Clinton in a friendly, welcoming environment. The event kicks off on August 6th with a barbeque hosted by CFOH at a private residence in Chappaqua. To RSVP for this event, contact Hillapalooza16@gmail.com

The event will feature lawn games, music and food for the whole family organized by local party planner Monique Banks.

“We are a team of Chappaqua moms and dads who are truly honored to celebrate this history making accomplishment of one of our own,” said Banks. “That being said, we know how to throw a party…and it will be a celebration to remember.” 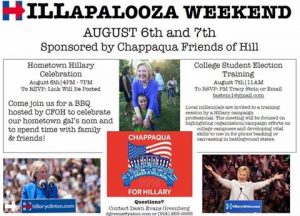 “One hundred years from now, historians will be talking about this election and we want our town to have a place in that conversation,” Greenberg added. “While the day is 99% celebration, we do hope we can get more folks involved locally as well as let the world know just how proud Chappaqua is to be home to our first female presidential candidate.“

The Hillapalooza weekend continues with a special event on August 7th geared to local college students. Several college students home on summer break have been active CFOH volunteers. They wanted to increase their support for Hillary when they return to their college campuses this fall, noted Greenberg.

The free event on Sunday will also offer training for college students, provided by Carol Evans, who co-founded Executive Women for Hillary and is a Hillary campaign professional. Evans created a dynamic training model called WHAM (Winning Hearts and Minds for Hillary).  The training session will feature skill-building to empower students to develop their Hillary commitment story–why they believe Hillary is the most qualified, intelligent and moral choice for President.

“This training session will look at what a Trump presidency might do to America,” commented Tracy Stein, a local Clinton supporter and campaign fundraiser who is helping to organize the training session.

“Our hope is that, armed with new confidence to speak about Hillary, students will make calls, canvas, and most importantly, go back to colleges throughout the country to act as Hillary ambassadors,” continued Stein. “These student ambassadors can have enormous power in the GOTV effort.  As the demographics play out, reaching college students could make a huge difference in this election.”

Students interested in attending the training session can RSVP to Tracy Stein at tastein1@gmail.com.