Making a Difference Since 1982

Here in Northern Westchester, you may not know of Greyston Bakery by name, but, perhaps, you know Ben & Jerry’s Chocolate Fudge Brownie ice cream. Based in Southwest Yonkers, Greyston Bakery delivers 35,000 pounds of brownies per day to Ben & Jerry’s. Greyston’s decadent, mouthwatering baked goods are also sold at Whole Foods and available on their website at Greyston.com. On the packaging of their products is the Greyston mission statement: Bakers on a Mission. We Change Lives. That’s one weighty claim. How could a bakery have the audacity to make such a declaration?

Mindfulness seems to be the buzzword of late, but mindfulness is an age-old concept to describe zen-like philosophical principles. Most of us associate mindfulness with yoga and meditation. Today, the word is being used extensively–mindful living, mindful eating, mindful parenting, mindful shopping, mindful business practices, etc. But…what does it actually mean? Mindfulness is derived from, but not limited to, Buddhist philosophy. It’s about being self-aware of the choices made in the present and how the decision-making process affects the outcome of the future. Philosophically speaking, mindfulness has the potential to change one’s trajectory, path, and eventual outcome in the future. Making mindful decisions is not limited to caring for one’s own wellbeing and prosperity. It also includes feeling a deep sense of responsibility and moral obligation to give back, serve, and uplift those in our communities and beyond for the greater good of humanity.

However, when a company decides to implement mindful principles as part of its business model, how exactly does that translate in the real world? What’s the impact on its success? In addition to turning a profit, is it possible for companies to uplift and enhance the lives of its employees and extend its reach into the community to effect positive change?

That’s one tall order. Yet, Greyston Bakery has been fulfilling that order since its inception in 1982. This is NOT your ordinary bakery. Founder and Buddhist Monk Bernie Glassman opened Greyston Bakery 34 years ago. His intention was to solve the serious social issues of high poverty and unemployment rates in Southwest Yonkers by employing the so-called unemployable. Glassman believed that business success and social justice are two sides of the same coin.

One key principle the Greyston business model is based on is Open Hiring. It benefits those who would not be considered employable by most companies’ standards. In Greyston’s 2015 Fast Facts – Mapping a Solution to Poverty pamphlet, it reads, “…The Bakery has a fundamental commitment to social justice through our Open Hiring policy in which individuals are offered employment regardless of educational attainment, work history, incarceration or past social barriers. Anyone with a positive attitude and strong work ethic is given a chance to transform their life for the better….” Basically, there’s no box to be checked on the application that delves into the applicant’s past. A prospective employee is put on a waiting list, and, when a position opens up, Greyston interviews the next person on the list.

To be clear, Greyston Bakery is a for-profit company. However, all the proceeds go to the Greyston Foundation which, in turn, provides various social programs offered to its employees as well as the community it serves. To say the least, Greyston is a multidimensional, nationally-recognized social enterprise. Since 2008, Greyston became a Certified B Corp, meaning it has to meet “…rigorous standards of social and environmental performance, accountability, and transparency…B Corp certification evaluates an entire company (e.g. worker engagement, community involvement, environmental footprint and governance structure) rather than looking at just one aspect of a company…”* In addition, Greyston has achieved Level 3 SQF Certification–the highest level in food safety and quality.

There are several philosophical plaques that hang along one of the walls in The Bakery’s environmentally conscious architectural structure. In addition to mindfulness, Greyston implements another important principle known as PathMaking. The plaque reads, “PathMaking…is both a guiding philosophy and a program at Greyston. The PathMaking philosophy is our belief that individuals can be supported to achieve wholeness (self-sufficiency) that comes from having a well-balanced, satisfying and integrated personal, spiritual and professional life. The PathMaking program at Greyston provides direction, support and referrals to all members of the Greyston Mandala–employees, clients and the board in the areas of personal and professional development and organizational success.”

Once hired, Greyston maps out a tailored-made path for the employee. Greyston mindfully considers all the aspects and challenges facing the individual–both in their work environment as well as in their personal life. Then, the new employee is placed in a nine-month apprenticeship program and provided support through various social programs offered by the Greyston Foundation.

Greyston’s Workforce and Development programs offer educational support, training, and business skills. The Greyston Childcare Center provides childcare and youth services for employees with children. Affordable housing is also available for those in need. What’s important to note here is that everything offered through the Greyston Foundation is within walking distance of the Bakery and/or accessible via public transportation. There are countless examples of the great works Greyston is doing for its community.

One example is, in collaboration with the City of Yonkers, Mayor Mike Spano, and New York State Senator Andrea Stewart-Cousins, there are now 441 plots of community gardens scattered throughout Southwest Yonkers. In 2014, these gardens produced 27,200 pounds of produce.

So, up here living in Northern Westchester, why should we care about Greyston’s efforts in Southwest Yonkers? 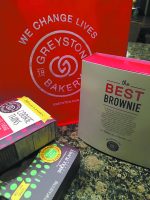 President and CEO Mike Brady wants to extend its reach and share Greyston’s successful, prosperous and inspirational story beyond Southwest Yonkers. Clearly, Greyston is making a positive impact on its community by providing real, substantive solutions for the difficult problems of poverty and unemployment. And…it all leads back to the road of implementing mindful business strategies–a path worthy of following. Just don’t forget to stop and savor the brownies along the way. For more information, visit www.greyston.com

Greyston Employees on a Path to a Prosperous Future

Employee: Celia Robertson
Age: 35
Years employed: 15
Position: Line Staff
Her inspirational story: At the age of 20, Celia Robertson was hired by Greyston Bakery. It was her first job. She knew of The Bakery because her brother was a mixer at the time. To describe Robertson as an enthusiastic employee is an understatement. “I just love what Greyston stands for and the opportunities it provides,” Robertson states. She is a mother of two children–Khaliyah, 12, and Joseph, 8. “My daughter is already a great baker,” says Robertson, beaming with pride. As a single mother, she is grateful to have access to the child and youth services offered through the Greyston Foundation. Her aspirations beyond Greyston Bakery include opening a restaurant in Southwest Yonkers offering Jamaican and Creole cuisine. 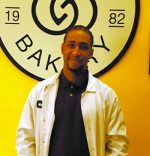 Employee: Curtis Savage
Age: 24
Years employed: 3
Position: Quality Assurance Technician
His inspirational story: “When I was a teen, I was going down a dark path, cutting class, hanging out with the wrong crowd…It wasn’t good,” says Savage. His employment options were limited because he did not complete high school. Savage is one of many employees who have and are benefitting from Greyston’s Open Hiring policy. “My life changed when I was hired by Greyston,” he states. Savage is a father of three children: Samantha, 6; Nicholas, 3; and Curtis, 2. After having children, Savage’s perspective shifted. “I want my kids to have the best of everything,” says Savage. He is grateful for the support offered through the Greyston Foundation including childcare as well as taking advantage of the business and training programs through Greyston’s Workforce and Development Center. Savage is working on getting his GED and certification in food safety. When asked what his aspirations are for his future beyond Greyston Bakery, Savage confidently replied, “I plan on going to college, focusing on healthcare…then work towards becoming an RN.”

A key fundraiser benefitting the Greyston Foundation will be held on June 15 at Chef/Owner Peter Kelly’s Xaviars X2O on the Hudson in Downtown Yonkers. For additional info, please contact karent@greyston.org.