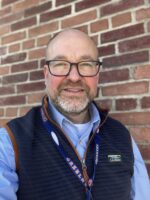 Geoff Curtis oversees, or in his words, is “a part of” the powerhouse that is Horace Greeley athletics in his role as athletic director. The boys swim team just wrapped up their undefeated conference season; the boys and girls ski team recently won team events; the girls swim team were State champs–winning at Ithaca College–and back in October the football team and the entire community celebrated a homecoming victory against the Irvington Bulldogs.

There are many coaches at Horace Greeley High School, but there is only one athletic director.

“I’ve been a pretty fortunate athlete and educator throughout my whole sporting life,” said Curtis. Curtis played baseball at Lewis-Clark State College for coach Ed Cheff, who recently passed away, then went on to assistant-coach under him while in grad school. Curtis learned much from his mentors and works to pay it forward. “I had high quality educators and coaches from the very start, and that rubbed off on me,” said Curtis.

While observing a PE elementary school class one morning, he saw students at the end of the game they were playing, turn to each other to say, “Good game.” This is exactly what Curtis wants to see among his students. According to Curtis, they have to understand that, “for them to enjoy this game, they need each other…

“You are a student and a person first, and being an athlete comes second,” he said. This outlook permeates every team and every coach in his district. The idea is not just for his students, it’s for everyone. “We as people should always be working on our growth.”

In the unique individual sports, wrestling and swimming, students compete against each other, but the scores are kept as a team. Curtis pointed out that when the wrestling and swimming coaches come into his office to tell him about the meet, they never tell him about their best three athletes, they tell him how the team did. It’s not just about the talents of the few. It’s “the squad, not the individual. That’s something that really permeates our department,” said Curtis.

Curtis highly values his co-workers and remains humble about his role as athletic director. “There are a lot of great things in place. I’m just looking around and seeing if there’s anything I can do to improve or acknowledge and continue what’s already here.” All he will allow is, “I’m fortunate to be in the position to have some impact – a small impact on all of it.”

Curtis has had to perform his duties during trying times. During the first year of COVID, he said, “Pretty soon it became clear, I’m not going to be able to meet with [my] students again. Except maybe a triple-masked senior ceremony on the baseball field.” It wasn’t just sports that were affected by COVID, of course. In Curtis’ words, everything that wasn’t the virtual classroom was canceled.

“It highlights how much we appreciate our extracurriculars. From the educators who put in extra time to help these young people to the parents who didn’t get to watch to the community members who just want to come out and cheer them on.” Curtis is very thankful that some degree of normalcy has returned, and that athletics are able to resume at the level they have been.

In fact, “We kind of went whole hog for homecoming,” he said. They scheduled as many home games as possible and built the ‘Greeley Zone’–a blocked off area of campus from the back parking lot to the tennis courts, where they had food trucks.

“People of every age were there,” said Curtis. “It was really a community event. There were young parents with not even school age kids who came by just to be a part of it.”

Curtis embraces this aspect of his job. “The job of an athletic director and really any administrator in a district like this is to embrace those community opportunities that are there.” And Curtis is excited about the future, given the past success of community events. “We’re looking at something similar this spring. It’s in the planning stages right now,” he said.

“It’s the Time with the Team”

The community element of sports highlights how much more than a game these events really are. “It might not have to do with the equipment that you use to play your sport. It’s the time with the team, it’s the things you learned from the coaches, it’s the experience and the journey,” said Curtis.

There are astonishing wins and brutal losses, but there is so much more than that. “It’s fun and it’s rewarding and it’s hard work, all rolled into one,” said Curtis. “But it’s not easy.”

These students made a commitment that everyone involved takes very seriously. That’s why a team’s players show up to practice multiple times a day, and that’s why people’s jobs revolve around it. But that’s not it either. It’s not one athlete, it’s not the entire town. It’s all the above.

Nolan Thornton is a screenwriter and freelance journalist living in the Hudson Valley of New York.